About the Oslo Declaration

Find out more about the reasons for the Oslo Declaration, and why HIV criminalisation is doing more harm than good to public health and human rights.

Who is behind the Oslo Declaration?

We are a group of 20 individuals and organisations from civil society around the world concerned about the inappropriate and overly-broad use of the criminal law to regulate and punish people living with HIV for behaviour that in any other circumstance would be considered lawful. We are working to end such injustice. We are led by, and include, people living with HIV, and supported by committed HIV advocates. Our expertise covers medical, social, ethical, political, human rights and judicial issues relating to HIV and the criminal law.

Why is it called the Oslo Declaration?

We came together in Oslo, Norway, on the eve of the global High Level Policy Consultation on the Science and Law of the Criminalisation of HIV Non-disclosure, Exposure and Transmission, convened by the Government of Norway and the Joint United Nations Programme on HIV/AIDS (UNAIDS).

The objective of the High Level Policy Consultation was to provide a global forum in which policymakers and other concerned stakeholders could consider their current laws and policies regarding the criminalisation of HIV non-disclosure, exposure or transmission in light of the most recent and relevant scientific, medical, public health and legal data.

Although our declaration is not an official High Level Policy Consultation document, we support the objective of the meeting, and encourage policymakers to review their own laws and policies, and to take any and all steps necessary to achieve the best possible outcomes in terms of justice and protection of public health in order to support effective national responses to HIV and uphold international human rights obligations.

What is the current state of HIV criminalisation?

Prosecutions are taking place in many countries around the world either under HIV-specific criminal statutes or under a wide range of often inappropriate general criminal laws.[1]

Most criminal cases have been framed by prosecutors and the media as being cases of ‘deliberate’ or ‘intentional’ HIV transmission when, in fact, the vast majority have involved neither malicious intent nor alleged or even proven HIV transmission.[2]

In recent years, both the number of prosecutions, and the number of new HIV-specific criminal laws have been increasing[3] even as the public health response to HIV – based on a human rights and evidence-informed approach[4] – has significantly reduced the number of new infections and greatly improved the quality of life of people living with HIV.[5]

However, several countries are now rethinking their approach to the use of criminal law due to their awareness of advances in HIV-related science and medicine.[6]

Many experts have raised concerns regarding the broad, collateral harm inherent in a regulatory and criminal-based approach to HIV prevention.[7] In particular, there is evidence of a negative public health impact in terms of:

How do HIV-related criminal laws and prosecutions harm human rights?

There is a growing body of evidence that such laws and prosecutions are having a negative impact on all people living with HIV[9], due to:

In addition, evidence from around the world[10] also suggests:

Where can I learn more about HIV criminalisation?

All of the supportive evidence to our statements can be found in the references, which link to the original documents. Please also explore the hivjustice.net,  hivjusticeworldwide.org, and HIV Justice Toolkit websites for everything you need to know about, and to advocate against, HIV criminalisation.

Read and support the Declaration 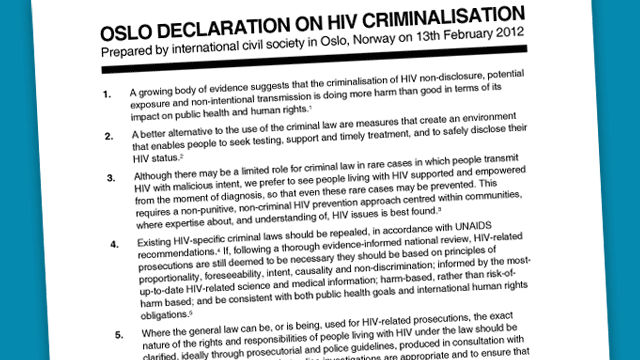 Advocates working to end inappropriate criminal prosecutions for HIV non-disclosure, potential or perceived exposure and non-intentional transmission from around the world explain why they support the Oslo Declaration on HIV Criminalisation.

Meet some of our original endorsers. They support the Oslo Declaration because...

You can add your support to the Oslo Declaration as an individual, an organisation, or both.

If you are signing on only as an organisation, please include the name of the organisation in the Name field.

If you include your website, it will appear as a live link to your name/organisation.

Site designed and developed by NAM