There is no HIV-specific criminal statute in Peru, however, the general criminal law contains provisions which have been used in at least two cases.

Article 121 of the Penal Code criminalises the causing of serious injuries with a penalty of three to eight years’ imprisonment, or five to ten years’ imprisonment where foreseeable death occurs. Serious injuries are defined as those that cause imminent danger to life, mutilate a body part or organ or render them unfunctional, cause incapacity for work, disability or permanent psychiatric illness, disfiguring in a serious and permanent way, or any other damage to the bodily integrity or the physical or mental health of a person who requires thirty or more days of assistance or rest.

Article 124 criminalises, by private action, substantively similar injuries with a lesser sentence of imprisonment for up to one year, or up to two years if the injury is serious, and a fine of sixty to 120 days.

Article 289 criminalises the knowing spread of dangerous or contagious diseases with a penalty of imprisonment for three to ten years. Where foreseeable serious injury or death occurs, the penalty is raised to ten to twenty years’ imprisonment.

Additionally, there is a limited HIV-specific law, Law No. 26626 of June 1996, modified by Law No. 28243 of May 2004, which contains some protections for those living with HIV. Under Articles 4 and 5 of Law No. 26626, testing for HIV is voluntary except in limited circumstances such as blood or organ donation or criminal investigation, meaning that individuals are generally not compelled to disclose their HIV status.

In 2014 it was reported that a man was convicted of raping and, by doing so, transmitting HIV to two minors. The defendant was aware of his status and was undergoing treatment. He was sentenced to a total of 33 years’ imprisonment for these offences which included the spreading of a dangerous or contagious disease (Article 289 of the Penal Code).

In 2019 a man was sentenced to six-and-a-half years in prison for transmitting HIV to his wife and daughter, and was also ordered to pay civil damages. It was established in the trial that the defendant had known of his HIV status since 2013 but did not disclose this to his partner, who in 2017 learned that she was living with HIV and that this had also been vertically transmitted to her baby during pregnancy. Here, the defendant was prosecuted under Article 121 of the Penal Code.

Whoever causes other serious injury to the body or health, will be imprisoned for not less than three or more than eight years.

Serious injuries are considered to be:

When the victim dies as a result of the injury and if the agent was able to anticipate this result, the penalty will be not less than five or more than ten years.

Anyone who knowingly spreads a dangerous or contagious disease for people’s health will be repressed with imprisonment not less than three nor more than ten years.

If serious injuries or death result and the agent was able to anticipate these results, the penalty shall be not less than ten or greater than twenty years.

The results of tests diagnosed with HIV / AIDS and information on the true or probable cause of infection are confidential. This information may only be requested by the Public Ministry or the Judicial Branch, provided that the circumstances justify it and only for criminal investigation purposes.

Health professionals are required to notify the Ministry of Health of diagnosed cases, even where the patient has died. 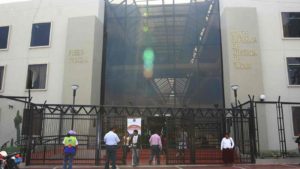 Peru: Man sentenced to six and half years in prison for alleged HIV transmission to his partner and daughter in second case of HIV criminalisation in Peru