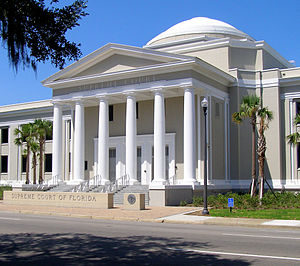 A law that requires someone with HIV to notify a potential sex partner beforehand applies to same-sex relationships as well as between a man and a woman, the Florida Supreme Court unanimously decided Thursday.

The defendant, GX, has been trying to have a charge dismissed under a 1986 state law designed to prevent the spread of the human immunodeficiency virus.

X is HIV-positive, according to records.

The case, argued last February, involved the definition of “sexual intercourse.” In 2011, X, a man, lied to a male sex partner that he was HIV-negative, “forg(ing) his doctor’s signature on the lab report,” the opinion said. It did not state whether the other man acquired the virus from having sex with X.

Lawyers for X had argued the law says it’s illegal not to disclose an HIV infection before “sexual intercourse,” but that definition only appeals to traditional sex between a man and a woman—not two men.

The law itself does not define sex, and two different appellate courts had disagreed over the definition.

Justice Charles Canady, who wrote the decision, said: “We first consider the plain and ordinary meaning of the term ‘sexual intercourse’ and conclude that it is not limited to only penile-vaginal intercourse.”

Including forms of sex other than penile-vaginal in the definition of intercourse is “a reasonable result, which gives full effect to the Legislature’s intent to reduce the incidence of HIV,” Canady wrote.

“As used in a statute directed at curtailing the spread of HIV(, )it would be absurd for the term ‘sexual intercourse’ to apply only to the act of heterosexual penile-vaginal intercourse,” he added.

As of mid-2015, the Florida Department of Health estimated that nearly 110,000 Floridians were living with HIV, and there had been almost 5,900 newly-diagnosed HIV infections in the state in 2014.

The full decision is available on request

Is Supreme Court’s Same-Sex HIV Disclosure Ruling On its Way?

It has been two years since the state’s highest court held legal arguments about the validity of a 1986 statute requiring HIV-positive people to reveal their infection before having “sexual intercourse.”

The case involves a man charged with a felony after failing to tell his male sex partner that he carries the human immunodeficiency virus. There’s the rub.

The legal issue before the court is . Really. That’s because of the way the law was written a hundred years ago, and now courts in different parts of Florida have disagreed on its application.

“In the history of Florida law the specific term, sexual intercourse has always been interpreted only to mean reproductive sexual conduct,” Gary De Baun’s lawyer argued.

Therefore, he claimed his client’s conviction should thus be reversed; that he did not violate the law as written, because it only applies to sexual conduct between a man and a woman.

Florida courts have disagreed, and the legal issue is before the Supreme Court for resolution. But it has been for a long while. It was argued on Feb. 4, 2015, and the court has still not ruled. Meanwhile, until the highest court of this case decides this case, prosecutors in multiple counties are reaching conflicting decisions.

The record in this case shows that Debaun’s partner asked him to take an HIV test, and that Debaun, who knew that he was infected, gave his partner fake test results, showing he was free of the virus that causes AIDS. A lower court threw out the charge, but it was reinstated on appeal. So until the court decides, Debaun lives in limbo.

Debaun’s lawyers are saying that since the legislature has failed to define intercourse as anything but sex between a man and a woman, the disclosure requirement cannot be applied to same-sex couples. If the court agrees, the case would be dismissed- if the court ever rules.

At the time, Justice Pariente criticized the legislature for its inaction, remarking “this issue could be solved easily by them.”

An experienced court watcher in Tallahassee told SFGN that cases “generally don’t take this long to decide. One of the moving parties should prod the court for a ruling.”

It’s ironic the delay has taken so long, because on April 7, 2014, the Florida Supreme Court designated this as a “high profile case of significant public and media interest.”

Well, apparently not that significant. We will see soon.

An appellate court has reversed a judge’s ruling to drop a criminal charge against a Key West man accused of lying to a male partner about his HIV-positive status in a move that could propel the issue before the Florida Supreme Court. And if that happens, it could redefine how Floridians legally define sexual intercourse.

The case began in 2011 when Gary DeBaun was accused by his former partner, Charles Marlin, of concealing his condition and of crafting lab test results by forging a doctor’s notation saying he suffered from lupus, not HIV, according to court records.

On Wednesday, the Third District Court of Appeal (DCA) reversed county Judge Wayne Miller’s November 2011 order that a felony charge against DeBaun be dropped. The appellate court remanded the case and ordered it be reinstated for prosecution by the Monroe County State Attorney’s Office.

Two years ago, Miller cited a previous case in the Second District Court of Appeal — L.A.P. v. State — and wrote that the court “determined that the common and ordinary meaning of the phrase ‘sexual intercourse’ only includes contact between the genitals of a male and female.”

DeBaun’s attorney, Alan Eckstein of Key West, successfully argued at the time that the only state law that does define the term — Florida Statute 826, which prohibits incest — says it means a penis penetrating a vagina. Not only would that not pertain to sex among gay men and gay women, it would not pertain to other sexual acts between men and women that could transmit HIV.

Assistant State Attorney Colleen Dunne rejected Eckstein’s argument in her response two years ago, stating that lawmakers did not intend for judges to “utilize a definition found in a completely different and unrelated statute,” according to court records. “Rather, the doctrine of statutory construction requires the court to give the term its plain and ordinary meaning, unless the words are defined in the statute or by the clear intent of the Legislature.”

Dunne also argued that, by law, the courts can refer to a dictionary if they need to “ascertain the meaning in which the Legislature intended to ascribe the term.” Webster’s secondary definition of “sexual intercourse” is “genital contact between individuals other than penetration of the vagina by the penis.”

The Third DCA agreed with Dunne and ruled on Wednesday that, “because we find that the plain and ordinary meaning of the term ‘sexual intercourse’ as used in Section 384.24 includes more than an act where a male’s penis is placed inside a female vagina, we need not, as did our sister court in L.A.P. look to case law defining this term as used in other statues.”

In other words, the definition of “sexual intercourse” is generally understood to mean more than just traditional sex between a man and a woman, according to the Third DCA’s ruling.

Eckstein argued before the appellate court, and it was one Third DCA judge’s dissenting opinion that the courts are broadening the Legislature’s intent. The attorney was quick to point out Friday that this wasn’t a unanimous opinion.

Whether or not Eckstein and his client will seek an audience with the highest court in the state was still up in the air on Friday.

Attorneys on both sides noted the Fifth DCA also made a recent ruling that falls in line with the Third DCA’s take on the issue. That puts the Third DCA and Fifth DCA decisions at odds with the Second DCA ruling as cited by Judge Miller.

While such legal conflicts do not automatically mean the state Supreme Court will hear them, there is precedent for just that happening when multiple appellate courts dis- agree on an issue, as it gives the Supreme Court jurisdiction.

“Because there has been a certified conflict in the case, we have the opportunity to attempt to have the Florida Supreme Court review the matter,” Eckstein said. “The Supreme Court has discretion on the cases they hear and the cases they don’t, so this is like getting to the steps of the Supreme Court, and waiting to see if the Court will let us in. From my point of view we are still in the process of making that decision as the appellate decision just came down two days ago.”

The state will handle the case normally, Dunne said. “The case has been reinstated against Mr. DeBaun and the state will proceed with prosecution,” Dunne said Thursday, while declining to comment further on the case. Once again, DeBaun will face a maximum of five years in jail and fines up to $5,000 if convicted of the third-degree felony.