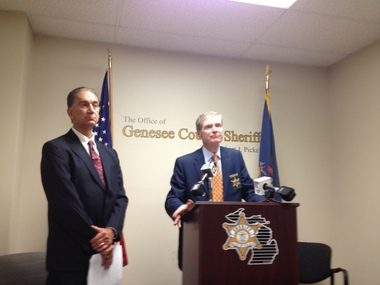 GENESEE COUNTY, MI – At the height of the AIDS crisis, the state passed a law requiring those who were HIV positive to tell potential sex partners or face going to prison.

Recently the law, which has been used 90 times in the past 23 years, was dusted off again to charge a Flint man with felony charges for failing to tell his partners that he was HIV positive.

Looking at the law, public health officials say it’s necessary to protect the public from the spread of the HIV, while others scrutinize it for being unfair, discriminatory and no longer needed.

“People were freaking out about AIDS in the 1980s,” said Ron Bretz, criminal law professor at Cooley Law School in Lansing. “We all knew that unprotected sex could give you herpes or get you pregnant, but you live with that. But now that sex could kill you. That was new. That was something we hadn’t heard before.”

Charges of non-disclosure were announced Tuesday against Johnnie D. Peters, 44, of Flint. He was informed he was HIV positive in 1995, but never told partners he was infected, law enforcement officials claimed.

Genesee County Sheriff Robert Pickell said investigators believe he could have had unprotected sex with as many as 50 individuals. Genesee County Health Officer Mark Valacak said the county health department has identified four people as sexual partners of the man since 2007.

The man is charged with two counts of sexual penetration with uninformed partner, a four-year felony.

The first HIV case in Genesee County was reported in 1983. There were three more reported in 1984 and that grew to 15 more in 1985, said Stevi Atkins, CEO of Flint-based Wellness AIDS Services.

Now, an estimated 680 people in Genesee County are HIV-positive, she said.

HIV, which can weaken the human immune system to the point that it has difficulty fighting off certain infections, was considered such a high health risk that legislation was introduced in Michigan in 1988 to help prevent spread of the virus. The law, which took effect in March 1989, states that anyone diagnosed with AIDS (acquired immune deficiency syndrome) or who knows they are infected with HIV and does not inform a sexual partner is guilty of a felony.

Valacak said he was in favor of the law in order to keep the community safe.

“The prevention of communicable diseases is a critical element of public health. That is one of the basic things that we do,” Valacak said. “New laws are passed as we recognize the need to protect the public.”

Bretz said the law came about at the height of HIV and AIDS fear.

But the Michigan law was pretty reasonable considering that at first people were attempting to bring assault and intent to murder charges against individuals who didn’t inform sexual partners that they had HIV or AIDS, Bretz said.

Even so, Sean Strub, executive director of the Sero project, said governments should took a much harder look at the law and others like it across the country. They were created during a time when people were very uniformed about HIV and they should be done away with, he said.

The Sero Project is a nonprofit human rights organization that focuses on ending criminal prosecutions of people with HIV for non-disclosure.

A total of 36 states have an HIV-specific criminal law, according to the Sero website. In Michigan, charges were filed under its statute 90 times and 52 individuals were convicted, according to information Strub said he gathered by sending out Freedom of Information Act requests.

The HIV laws should be repealed because they discriminate against individuals with a certain virus, there are a lot of unanswered questions that aren’t addressed and they may actually be discouraging testing, Strub said.

“I think there are very few cases that are appropriate for criminal law,” he said.

The actual risk of harm if the sex partner was infected should also be considered when prosecuting an individual, Strub said.

If an HIV-positive person stays to their treatment regimen and lives a healthy lifestyle, their virus is considered “undetectable” and the chance of spreading it is lower, he said.

If someone was charged with hitting someone with a bat or a chair the question, “Was harm inflicted?” would be asked. It should be no different with a virus, Strub said.

The stigma the law creates is huge, Strub said. The government unfairly individuals with HIV. He asked why one virus should be treated differently than other viruses under the law.

“Like harms should be treated alike. You can’t just include HIV,” Strub said.

HIV has always carried a certain stigma with it. Now, the added fear of being prosecuted because of could actually discourage people from getting tested, Strub said.

If someone doesn’t know their HIV status, then they don’t risk arrest.

Health officials claim the laws help reduce the spread of HIV, but in reality it is the opposite, Strub said.

“First of all, it’s dehumanizing. But second of all, it’s not an effective way to deal with the epidemic,” he said. “Get tested and risk arrest. The majority of new transitions come from people who don’t know they are positive, so they have nothing to disclose.”

Certain cases of intentional harm should be prosecuted, Strub said. But for the most part, he said, the statutes aren’t effective in reducing the spread of HIV and should be given a deeper look.

In Genesee County, there is a lengthy process before it gets to the point of criminal action, said Atkins.

The process includes counseling, behavioral changes and warnings, if necessary.

Genesee County Sheriff Robert Pickell said Tuesday that Johnnie D. Peters used three aliases on Facebook and would troll homosexual websites to find sexual partners. Peters knew he was infected but never told his partners about it, they charge. Peters was informed after a prison test in 1995 that he was infected with HIV, they said.

“We believe from our investigating that he set out to have sexual intercourse and never intended to inform them,” said Pickell. “We learned from the investigation that he didn’t want to be denied sex. He didn’t want be looked at differently.”

Pickell said investigators believe he could have had unprotected sex with as many as 50 individuals.

Valacak said health officials became suspicious in November after they were told by one of the man’s alleged sexual partners that the man had not told him about his HIV-positive status before they had sex.

“We were already aware of his (HIV-positive) status,” said Valacak. “That indicated to us that he was not informing his partners.”

Valacak said anyone who has ever had intercourse with Peters should be tested. They can do so by calling 810-257-3440.

Pickell and Valacak announced the charges in a Tuesday morning press conference.

Genesee County Prosecutor David Leyton said the charge has been issued once before during his tenure as prosecutor. Dickie L. Colwell was charged with the crime in 2009. He later pleaded guilty to the crime along with extortion and using a computer to commit a crime.

Peters is charged with two counts of sexual penetration with uninformed partner, a four-year felony.

According to Pickell, both of the men were in their teens, but over the age of consent. The first incident occurred in 2007 and the second in 2010, Pickell said.

There were 40 reported HIV-positive cases in the 2009-10 fiscal year, the latest stats available on the county health department website. In 2002-03, the number was nearly half that, with 22 cases. There were no statistics available for AIDS, which is symptoms and diseases that develop because of the damage HIV does to a person’s immune system.

Phillip Greenfield, a composition professor at Mott Community College and adviser to the Gay-Straight Alliance, called Peters’ alleged behavior extreme. Greenfield, who is gay, said there is some concern about negative reaction toward the gay community. It’s something students in the group will talk about when they meet for the first time this fall semester.

“The intentional part is what is really disturbing to me,” he said. “Probably the most disturbing part is that they were allowing themselves to spread the disease, and allowed others to unknowingly spread the decease.”

There is a stigma with a person disclosing they are HIV positive, said Stevi Atkins, CEO of the Wellness AIDS Services. There is a fear of rejection and retaliation for those who are HI- positive. Her facility helps its clients with ways to disclose their illness, she said.

The best way, Atkins said, is to plan ahead.

“It’s optimal to have conversations with sexual partners and future sexual partners about negotiated safer sex and what that means,” she said. “It’s really best to educate, empower and continue to have healthy lifestyles.”

GENESEE COUNTY, MI – A 44-year-old Flint man accused of intentionally failing to tell sexual partners that he had tested positive for HIV may have had sex with as many as 50 people, said Genesee County Sheriff Robert Pickell.

“We believe from our investigating, that he set out to have sexual intercourse and never intended to inform them,” said Pickell.

Valacak said health officials became suspicious in November after they were told by one of the man’s alleged sexual partners that the man had not told him about his HIV positive status before they had sex.

“We were already aware of his (HIV positive) status,’ said Valacak. “That indicated to us that he was not informing his partners.”

Pickell and Valacak announced the charges in a Tuesday morning press conference.

The man is charged with two counts of sexual penetration with uninformed partner, a four-year felony.

He has not yet been arraigned.