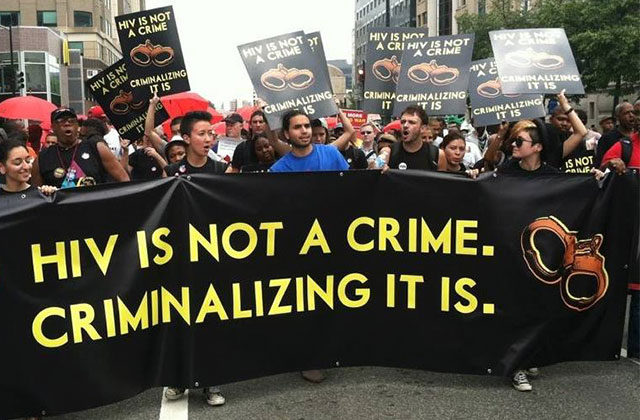 Report on HIV Criminalization in Florida

As of Sept. 30 Florida held 22 people in prison under HIV Criminalization (HC) laws. Of those 22 inmates, courts sentenced five only for violating HC Laws. Courts sentenced 12 for related charges as well as HC charges. Courts sentenced another five for “HIV-positive has sex, two or more violations.”

Courts sentenced the woman in one case of Criminal Transmission of HIV, to six years. In the one case of Tissue Donation by HIV Positive Person, courts sentenced the woman to eight years. Sentences for HIV-Positive Has Sex – two or more Violations ranged from two to 29 years. Sentences for HIV-Positive Has Sex range from two to 99 years.

Courts convicted five people solely for violating HIV-criminalization laws. As their conviction depends primarily on HC laws, they can be thought of as primary HC inmates. When their HIV “crime” is secondary to another offense, those inmates can be thought of as secondary HC inmates. Secondary HC inmates tend to be co-convicted of serious charges such as “sexual battery.” These 12 cases have longer sentences, part of a “throw the book at them” strategy. It is not clear whether courts sentenced the five “HIV-positive has sex, two or more violations” for two or more non-HC violations or for two or more HC violations.

The five primary HC inmates consist of four males and one female. Courts convicted the  female for “Tissue Donation by Person with HIV.” She has an eight-year sentence. All the males are Black. Convicted for “HIV-Positive Has Sex,” their sentences ranged from two to four years.

Courts co-convicted six secondary HC inmates of “sex with a minor.” Five are male, one Black, one Latino, and three whites. The one female is Black.

Courts co-convicted one secondary HC inmate, a Black male, of burglary of an unoccupied house.

Courts co-convicted one secondary HC inmate, a Black female, of felony prostitution, 3rdConviction. She is also the only person convicted under the charge of Criminal Transmission of HIV.

Courts convicted five male secondary HC inmates, of “HIV-positive has sex two or more violations,” four Black and one white. Some, but not all, of these five have multiple charges in the same court case. Others may have had past convictions.

Miami-Dade has one secondary HC inmate serving a 13-year sentence. Palm Beach and Monroe Counties have no HC inmates.

Courts convict people living with HIV of charges other than HIV Criminalization laws. In September 2016, the Florida prison system held 3,953 HIV-positive inmates. If Florida’s prison system were a county, it would have the eighth largest HIV-positive population among Florida’s counties.

This will be an on-going investigation into HIV criminalization laws in Florida.