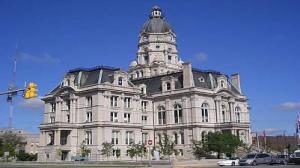 Terre Haute man accused of knowingly spreading HIV has been ordered to serve 20 years in prison on a 30-year sentence in a plea agreement that resolved five pending criminal cases.

IX, 32, appeared Tuesday in Vigo Superior Court 6 for sentencing in two separate cases. One involved charges of robbery, while the other involved battery by bodily waste.

A woman who said she contracted HIV from X called him a “cold-hearted monster” as she gave a victim impact statement to the court.

The woman said she was a friend of X, but then became intimate with him.

“What I thought was a wonderful daydream turned into a nightmare,” the woman said.

She was diagnosed with HIV in 2011, she said, and X denied being the source of the virus when questioned. The woman said she was not in favor of the plea agreement, but accepted it to settle the case for the other six victims.

X was arrested and charged in 2015 after investigators said he had sex with people while aware he was a carrier of HIV.

“He has no remorse for what he has done,” the woman told Judge Michael Lewis during the sentencing hearing. “My family is hurt and angry, and my children are lost. My two youngest get bullied because of me having HIV. I feel my life is over, and not by my choice but by his.”

X sat silently during the hearing, and he was led from the court without making comment.

He has already served 889 days in jail that will be credited toward his sentence.

The charges in the HIV case had involved seven victims and included a total of 27 criminal counts, including aggravated battery, battery by bodily waste, failure of carrier’s duty to warn and battery resulting in serious bodily injury.

Lewis last year ordered  X would be tried separately for each victim, meaning seven trials, with the first one to have started in February.

The sentence of 30 years was composed of a six-year sentence for a 2014 robbery and a 24-year sentence for battery by bodily waste in the HIV case that alleged he failed to warn others of his HIV status. Lewis ordered the sentences to be served consecutively.

Lewis ordered X to serve 20 years in the Indiana Department of Correction, while the remaining 10 years can be served on formal probation. If X completes the Purposeful Incarceration program, he could petition the court for a sentence modification.

Lewis told X the man still has the responsibility to warn others that he is a carrier of HIV.

There’s new movement in a disturbing case out of Vigo County.

A man stands accused of knowingly spreading HIV for more than a decade. On Tuesday afternoon, IX appeared via video conference in a Vigo County courtroom.

X faces 27-criminal counts ranging from aggravated battery to failure to warn his partners of his status, which is called “duty to warn.” The charges are based on accusations from seven different women who claim X gave them HIV; one who has developed AIDS.

X was set to face a jury of his peers on May 31. According to court documents, as discussion of discovery continues, the original trial date has been vacated.

X will face separate trials, which is what the defense was hoping for when they recently filed a motion to have the cases severed.

“It’s very complicated, because theoretically you could end up having eight trials, so it’s a very complex case, and its unique circumstances too as far as the allegations and the charging information,” Vigo County Prosecutor Terry Modesitt told News 10 after the hearing.

X is set to go to trial on Aug. 15 for the five charges alleged by “Partner D.”

For now, BX remains in the Vigo County Jail. He will appear for a motion’s conference on June 14.

A Terre Haute man has been arrested for failing to tell women with whom he had sexual intercourse that he is HIV positive. IX, 31, is facing 16 criminal charges related to his sexual activity between 2003 and 2014. State police investigators allege X had sexual intercourse with four women in that time frame and failed to tell any of them about his health issues.

WTHI-TV in Terre Haute reports court documents show three of the women have been diagnosed with HIV.

The charges include multiple counts of aggravated battery, battery by body waste, battery resulting in serious bodily injury, failure to warn and failure to comply. Indiana law requires people with HIV to warn their sex partners.

X has been held in the Vigo County Jail since April 2014 on unrelated charges.