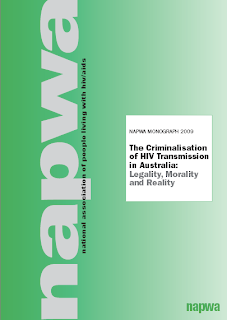 There have been some very important policy developments in Australia recently that I’ve been waiting to post about until I’d finished reading the entire (Australian) National Association of People Living With HIV/AIDS (NAPWA) monograph, The Criminalisation of HIV Transmission in Australia: Legality, Morality and Reality, to which I contributed a chapter (as a co-author).

I’ve now read all eleven chapters and I have to say that the monograph is essential reading for anyone interested in the issue of criminalisation. It has provided me with a great deal of insight and food-for-thought as I write my book (an international overview of the issues) for NAM.

As the Honourable Michael Kirby writes in the preface

“NAPWA has collected knowledgeable and informed commentators who have a great awareness of the epidemic in Australia. Without exception, the chapters are thoughtful, balanced and informative. I hope that they will be read in Australia. Indeed, I hope that they will be available overseas to bring enlightenment that is the first step in an effective response to the epidemic.”

You can see video of MP Kay Hull speaking at the launch, held last month in Canberra, here.

The monograph is already working its magic as an advocacy tool. Last week, the Sydney Star Observer reports that HIV organisations in Victoria – where more than half of all Australian prosecutions have taken place – are leading the call to clarify exactly when the public health department will involve the police to deal with people who are not disclosing their HIV status and having unprotected sex. 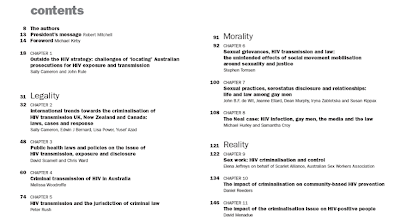 One of the chapters in the monograph examines such discrepancies in new state and national guidance on the management of people living with HIV who engage in risky sexual behaviour. The National Guidelines for the Management of People with HIV Who Place Others at Risk were produced in 2008 following the fallout from the Michael Neal and Stuart
McDonald cases. The guidelines recommend that public health authorities refer people who persistently ignore warnings to disclose and/or practise safer sex to the police as a last resort, but aren’t very clear on how this happens in practice.

Victorian AIDS Council executive director Mike Kennedy said although there were guidelines, a recent meeting of AIDS Council heads showed other states were similarly unclear about exactly what circumstances trigger a referral to police. “I’m not aware of any Australian state that has any clear guideline to say how this will happen, so that’s the missing bit from the reviews that were done around the country,” Kennedy said. “Our view is that [protocols] ought to be governed by a set of agreed procedures, not just rely on goodwill and a set of relationships between people in the Health Department and people in the police service because those people change.”

The NAPWA monograph also includes an enlightening chapter on the impact of prosecutions on people living with HIV, concern echoed in this comment in the SSO article from People Living With HIV/AIDS Victoria president Paul Kidd.

[Kidd] said the uncertainty of where criminal charges would be pursued was creating concern among some HIV positive people. “They’re fearful that in the normal course of their sexual lives they could put themselves in a situation where they inadvertently attract the attention of the police,” Kidd said. “We’re not talking about people who are deliberately spreading HIV or behaving in a negligent fashion. We’re talking about ordinary gay men and other people who are HIV positive who live in an environment where unprotected sex is a part of [their] lives.

I’m also reproducing an editorial by Robert Mitchell, NAPWA’s president, below, to give you an idea how NAPWA hopes this monograph will lead to a change in the way Australia deals with criminal prosecutions.

In response, last year NAPWA commissioned a collection of papers to examine these issues. We wanted to show how these cases have been prosecuted quite inconsistently across the country, and how they have been represented in the public domain by media coverage. We are launching the resulting monograph, The Criminalisation of HIV Transmission in Australia: Legality, Morality and Reality, this week.

A number of authors with different viewpoints have contributed to the monograph, including academics, legal experts and voices from within the HIV-positive and HIV-affected communities. The end result is a collection of papers that provide rigorous analysis of the current environment in Australia, and other parts of the world, with regards to prosecution of HIV transmission.

This set of materials and commentaries will be the basis for further work on these issues by NAPWA and its member organisations. Our intention is to start a dialogue across the HIV sector and with the broader public health and legal sectors, to examine the issues raised and the impact of criminal prosecutions on the HIV-positive community in Australia today.

While few would argue that an HIV-positive person who deliberately and maliciously sets out to infect another person with HIV has committed an act of violence that should be subject to criminal sanction, very few of the prosecutions in Australia have been in this category. Almost all have been for the ‘knowing and reckless’ category of HIV transmission, where the accused had no intention of transmitting HIV.

The use of criminal law against a person on the basis of HIV status in these circumstances is considered by many to be discriminatory, as it treats the HIV-positive partner as perpetrator and the HIV-negative partner as victim. This shifts the burden of prevention onto people with HIV, and undermines established principles of shared responsibility and safe, consenting, sexual practice.

The blame and persecution directed towards HIV positive people is unacceptable and NAPWA is calling for a review of criminal laws to redress this imbalance. Laws requiring mandatory disclosure by positive people, and laws that treat HIV as inherently more serious than other infections with similar medical impacts, are areas we think need fixing. We need a nationally consistent legal framework that supports public health policy and population health outcomes, and protects the human rights of people with HIV.

NAPWA hopes this work will spark interest and support from across the community to work towards resolving these differences and contradictions. We are working towards a nationally consistent, fair and just legal framework that reinforces rather than degrades the model of shared responsibility and treats HIV as a health issue first and a legal issue only as a last resort.