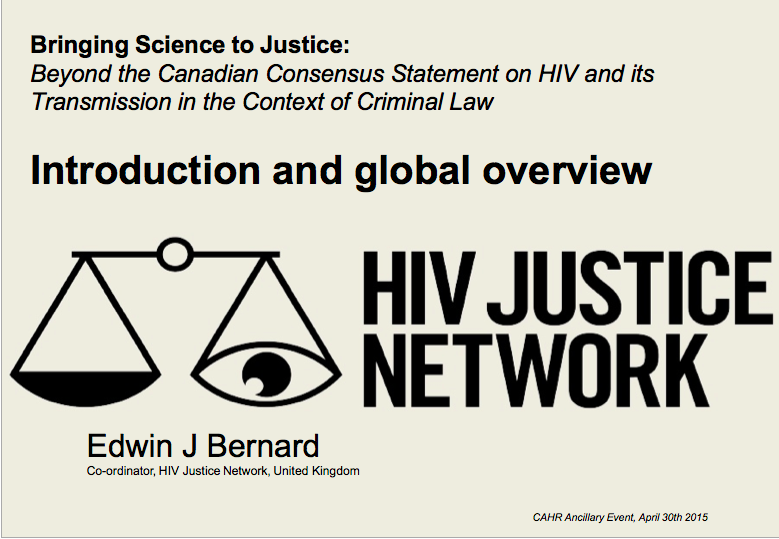 In 2012, the Supreme Court of Canada took a step in the wrong direction. The Court made a harmful decision that would have people living with HIV charged with aggravated sexual assault, jailed, and registered as sexual offenders – all this for not disclosing their status to a sexual partner, even if they used a condom or had an undetectable or low viral load. This is the case even if the positive person has no intent to harm and HIV is not transmitted.

In May 2014, some 80 scientific experts Canada-wide signed a groundbreaking consensus statement. They were concerned that scientific evidence around HIV was not correctly interpreted and understood by police, judges, prosecutors, and lawyers who work in the criminal justice system, contributing to the wide use of these harsh charges and sentences in cases of HIV non-disclosure.

Scientific evidence has a critical role to play during these criminal proceedings. Unfortunately Canada continues to see unfair prosecutions and unscientific rulings in cases of HIV non-disclosure, and criminal defense lawyers report great challenges in getting expert witnesses to testify in court. Provincial Attorneys General continue to resist calls for more restraint in pursuing prosecutions.

On April 30, the Canadian HIV/AIDS Legal Network co-hosted an ancillary event at the Annual Canadian Conference on HIV/AIDS Research (CAHR), along with the Canadian Experts on HIV and Transmission Team, and HIV & AIDS Legal Clinic Ontario (HALCO).

The event, ‘Bringing Science to Justice: Beyond the Canadian Consensus Statement on HIV and its Transmission in the Context of Criminal Law‘, provided an opportunity to examine the consensus statement in greater depth and discuss how to move forward – ultimately, to bring science to justice.

Below you will find my presentation setting the stage for the meeting, providing a global overview of the harms of overly broad HIV criminalisation, and how science has positively influenced HIV-related court rulings and criminal law on a global scale.

Although there has been no clear ‘win’ in Canadian courts so far following the Canadian consensus statement, it has real potential to positively influence developments in criminal law at home and abroad.

Two of the leaders who originated the consensus statements were Drs. Mark Tyndall and Mona Loutfy. In the statement, the authors cite their professional and ethical responsibility to assist those working in the criminal justice system so that these actors may better understand and interpret the current medical and scientific evidence. At this ancillary event, Dr. Tyndall recounted his experience testifying as a medical expert before the court.

Cécile Kazatchkine, Senior Policy Analyst at the Canadian HIV/AIDS Legal Network, noted that the consensus statement has been shared with many key players in the criminal justice system, medical experts, and the public.

Criminal defense lawyer Jonathan Shime, who has extensive experience working on cases of HIV non-disclosure, urgently called upon medical experts to testify before the courts.

The consensus statement is a very important tool for medical experts and lawyers to bring science to justice. As science evolves so, too, must the criminal law. Punishing people living with HIV who have an undetectable or low viral load, or use a condom, is not the answer.

The consensus statement can be found here.