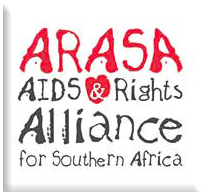 Applications are now invited for participation in the AIDS and Rights Alliance for Southern Africa (ARASA) 2016 online training course on the criminalisation of HIV transmission, exposure and non-disclosure.

Civil society, policymakers and service providers – including health care providers and law enforcement officials – working in Africa are eligible for the course, which will last for six weeks from 14 March 2016 to 22 April 2016, and require four hours’ commitment per week.

The deadline for applications is 8th March 2016.

The criminalisation of HIV transmission, exposure and non-disclosure, which is often referred to as ‘HIV criminalisation’, is the unjust application of criminal law based solely on HIV status – either by enacting and applying HIV-specific criminal laws, or by applying general criminal laws exclusively or disproportionately against people with HIV.

Law makers who try to enact HIV-specific laws to criminalise HIV transmission are often driven by public pressure to be seen to be doing something about HIV in their country without stopping to consider the effects of HIV criminalisation on the spread of HIV.

This online course will introduce participants to information about the criminalisation of HIV transmission, exposure and non-disclosure, the negative impact it has on the human rights of people living with HIV and key populations and on universal access to HIV prevention, treatment, care and support. The focus is on providing knowledge and skills so that participants can identify harmful HIV-specific transmission, exposure and non-disclosure laws and advocate for the removal of these laws.

After taking the course, students will be able to:

In the selection of participants preference will be given to persons who:

All applications must be received by no later than close of business 8 March 2016. Kindly note that applications received after the closing date will not be considered.

Application should be submitted by email to courses@arasa.info (and copy Jacob Segale (jacob@arasa.info) and Nthabiseng Mokoena (nthabiseng@arasa.info)). Successful applicants will be notified by no later than 11 March 2016. Should you not receive any feedback from us by 14 March 2016, kindly consider your application to have been unsuccessful.

Established in 2002, ARASA is a regional partnership of 89 non-governmental organisations (NGOs) working together to promote a human rights-based response to HIV and TB in Southern and East Africa, through capacity strengthening and advocacy.

ARASA’s purpose is to promote the rule of law and respect for human rights to safeguard the health status of all, especially of people living with HIV and TB and key populations at higher risk of HIV and TB, including lesbian, gay, bisexual, transgender and intersex (LGBTI) people, sex workers, people who use drugs and prisoners. ARASA’s overall objective is to ensure that legal, policy and social environments exist in Southern and East Africa (18 countries) in which people living with HIV and TB and key populations most at risk (prisoners, LGBTI persons, sex workers and people who use drugs) access acceptable, affordable and quality sexual and reproductive health and rights, HIV and TB prevention, treatment and care services.