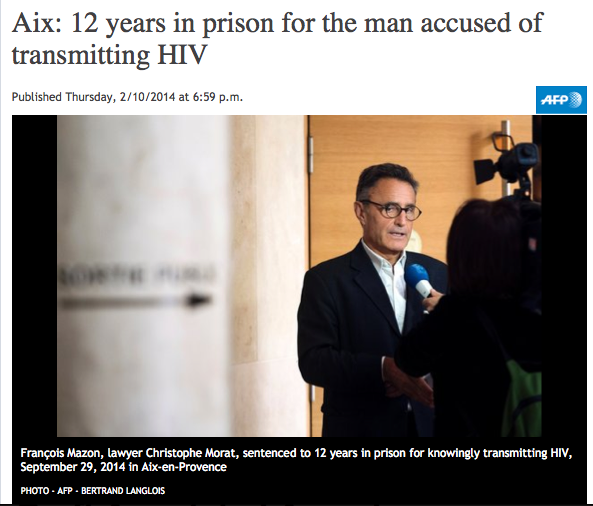 Yesterday, the Assize Court of Bouches-du-Rhône in the south of France sentenced  Christophe Morat, aged 40, to twelve years’ imprisonment, after having found him guilty of “administering a harmful substance with intent to cause permanent disability or mental impairment”.

There are several unusual aspects to this case.

1. Mr Morat was previously convicted in 2005 for having recklessly (dolus eventualis) passed on HIV to two women, and was sentenced to six years in prison.

2. This time, although there were six female complainants, aged 21-47 years, only one actually alleged transmission. She testified that she discovered Mr Morat was living with HIV before acquiring HIV herself.  She found out his HIV status by searching for him online after becoming that concerned that he was cheating on her. Despite this, she decided to stay with him and continue to have unproteced sex but told the court she believed him when he said she couldn’t be infected by him if he didn’t ejaculate. A psychologist told the court, “this woman was so afraid of being abandoned [that she stayed with him] and it’s strange but this virus was also a link between them.” The defense argued that she had a shared responsibility in acquiring HIV. “You knew he was HIV-positive, you knew he had lied to you, and yet you only considered what he told you about the modes of HIV transmission?” he asked her in court.

3. The prosecution characterised Mr Morat as a “charmer” and “seducer” and the five ‘HIV exposure’ complainants, all testified about first their love for him and then their sense of betrayal for not having been told that they were at risk, making this case the first time that ‘HIV exposure’ has been prosecuted in France.

4. Mr Morat stopped taking antiretroviral therapy between February 2009 and December 2010 and again in July 2011. The prosecutor, who had asked for a 15 year sentence, told the court that doing this “had turned Morat into a viral human bomb.” It was this that was used to find him guilty of intent, rather than dolus eventualis.  This is the first time that anyone in France has been found guilty of intentional HIV transmission.

Following sentencing, Mr Morat asked the six women for forgiveness. “Know this, I never wanted this, I never wanted to hurt you,” he told the court. Describing himself as “a plague carrier that built a wall of silence around myself” he tried to vocalise the deeply internalised HIV stigma that did not allow him to freely disclose his status, continue with his treatment, or use condoms consistently.

Mr Morat’s lawyers, François Mazon and Christophe Bass, told Le Monde that they believe that this case should not have been prosecuted, but instead his client and the complainants should have received counselling. “This has nothing to do with a criminal court. He did not infect five women and infected a woman who knew he was HIV-positive and agreed to have unprotected sex,” said Mazon. Bass pointed to the lack of desire for revenge, lack of intent and premeditation. “Give him the opportunity to heal. It is not a criminal court that heals, nor prison that heals.”

The trial has been quite a sensation in France, receiving a great deal of media coverage, including an eight minute report on BFM TV, one of the two French national news programmes.