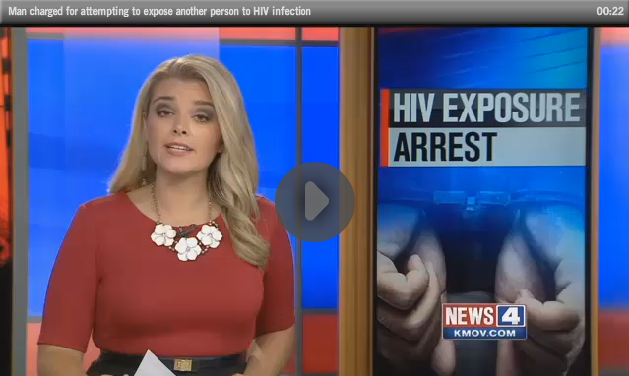 Following the prosecution and conviction of Michael Johnson, the US state of Missouri is now ‘ground zero’ for both overly broad HIV criminalisation and overly zealous law enforcement.

Yesterday police arrested (and alerted media to) a man whose only ‘crime’ was to chat with an undercover cop on social media.

He allegedly suggested they meet for sex without condoms without disclosing his HIV-positive status.

Update: He is now charged with attempted (sexual) HIV exposure, which, is in fact, actually a crime in Missouri.   As well as the HIV-specific statute below, there is a separate Missouri law of ‘attempt’, which seems to mean that even talking about having sex without disclosing your HIV-positive status first is apparently a ‘crime’ to overzealous law enforcement officers and proseutoris in the state in Missouri.

However, the media reports asking others to contact police if they have had sex with this man may produce an actual complainant.

Update: Surely what this man is alleged to have done is not a ‘crime’ in any real sense.  It is rather a heavy handed way to control and punish people living with HIV for daring to have sex lives. This is possibly entrapment. Which is a defence to a crime in Missouri. Missouri police, prosectors and media need to be told that this is unconstitutional, barbaric and completely unacceptable!