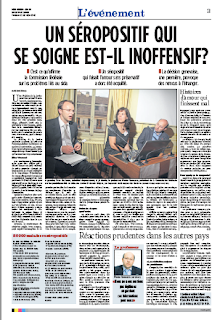 The Federal Court has now confirmed the recent HIV exposure acquital in Geneva, but shied away from explicitly discussing the link between an undetectable viral load and risk of transmission. In effect: they lacked the courage to change HIV exposure law throughout Switzerland.

According to AIDS Geneva’s Deborah Glejser, the Federal Court upheld the Geneva court’s finding that HIV exposure charges were no longer possible because the two female complainants were not exposed to HIV, but they did not actually discuss why this was the case (i.e. because the defendent was on effective treatment).

A brief report (in French) on 20minutes online, notes that the Federal Court emphasized that the women were not infected with HIV during unprotected sex and accordingly are not considered by the criminal courts to be victims. They could have sued for psychological harm in the civil court, but didn’t, and so “in the absence of such a request, their action can only be ruled inadmissible.”

Deborah Glejser tells me that she is extremely disappointed in the Federal Court since this was “a great opportunity missed.” Although HIV exposure remains no crime in Geneva, it will now be down to individual cases – and prosecutors as forward-thinking as Yves Bertossa – to change the law in Switzerland’s 25 other cantons.

The meeting highlighted the importance of the Geneva court’s ruling that an HIV-positive person on successful treatment, with an undetectable viral load, and no other STI, could not possibly be guilty of exposing another person to HIV if they had not disclosed their status before having unprotected sex.

The Geneva judgement has now been appealed by the complainant which means it will now be heard by the Federal Court, Switzerland’s highest court. Mr Bertossa appeared confident that the Federal Court would confirm the acquittal, making the ruling relevant throughout Switzerland (and possibly providing more legal ammunition for other jurisdictions).

Highlights of the meeting are available to watch on the AIDS Geneva blog. The meeting also received mainstream coverage, including a report in L’Hebdo (Switzerland’s answer to Time or Newsweek) and in the main Geneva broadsheet, L’evenement.