A new and important study of criminal HIV exposure and transmission cases in Switzerland was published yesterday.

Of the 27 accused where country of origin was known, 11 were born in African countries; 9 were born in Switzerland; 4 were born elsewhere in Europe; 2 were born in Asia and the near East; and one was born in the US.

Three cases did not involve sex. One case involved a doctor who disclosed the HIV-positive status of one of his patients; another case involved the Red Cross and contaminated blood; and the third one involved biting.

The remaining 36 cases involved sex – 31 heterosexual sex, and five sex between men. All but three of these 36 sexual cases involved consensual sex (as opposed to rape or sexual assault).

[Note: the only English-language report so far gets this wrong, saying that all 36 cases took place with the informed consent of the victim. That’s the problem with laws like these: in this case “consensual” means both parties agreed to have sex, and not that the HIV-positive partner had disclosed prior to sex.]

Admittedly, it is a bit complicated, since it is possible to be prosecuted for consensual, unprotected sex with disclosure under Article § 231 (spreading of dangerous diseases). In 21 cases, this law was used. Consequently, in more than half of the convictions there was no transmission of HIV, simply ‘HIV exposure’. Most prison sentences ranged between 18 months and 4 years, plus a fine of up to CHF 80,000 (c. €53,000) as compensation to the ‘victims’. The report authors point out that these sentences are longer than for other (non-HIV-related) ‘crimes’ charged under this statute.

Below is the table of cases (and scenarios discussed in court) adapted from the report. 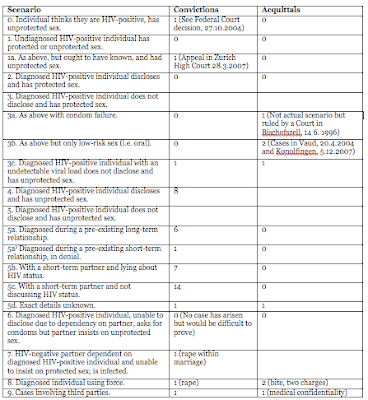 Unfortunately, the impressive 149-page paper (complete with comparisons with other jurisdictions) is only available in German (this is the link to the complete pdf; 1.4MB ). A six-page fact sheet from the Swiss AIDS Federation summarising the findings is also available in German (and now English).

The authors conclude by recommending the repeal of Article § 231, because, they argue, the law is discriminatory by unfairly placing 100% responsibility on the HIV-positive partner which is in direct contradiction with public health policies.

[Many thanks to my native German-speaking partner, Nick, for helping me understand the paper.]