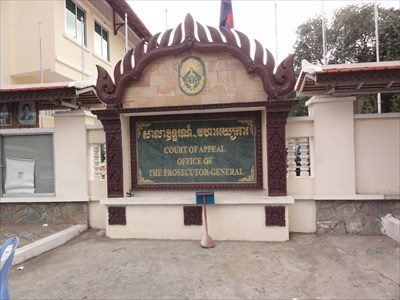 HIV-positive man at Appeal Court over sentence for unprotected sex

The Appeal Court on Tuesday again heard the case of a 43-year-old HIV-positive man who in 2013 embarked on a four-week sexual relationship with an 18-year-old woman without using a condom despite him knowing he had the disease.

The appellant called for another hearing after the Appeal Court upheld the lower chamber’s verdict in his absence.

Preah Sihanouk provincial court sentenced X to seven years in prison on December 16, 2014, and ordered him to pay 20 million riel in compensation to the victim.

Presiding Judge Tith Sothy Boraleak read the prosecution case which said the appellant, who had been living with HIV for 10 years, lured the young woman into having sexual intercourse with him in Preah Sihanouk province’s Veal Rinh district on December 4, 2012.

After a scandal broke out regarding the relationship, the girl’s family filed a complaint with local police and Hab was arrested in early 2013.

Considering the sentence handed down by the provincial court too severe, the man filed the original complaint with the Appeal Court.

Dissatisfied with the verdict given in his absence, he filed a second complaint asking the Appeal Court to again review his case. His appeal came up for review on Tuesday.

X informed the judged that he came to know the woman through phone conversations and online chats. He eventually asked to meet her.

He said as the relationship progressed, he asked the woman to have sex with him. Their affair lasted 28 days. “When I had sexual intercourse with her, I knew I had HIV but I never used a condom,” he said.

He asked the Appeal Court to reduce his punishment as the original sentence was too harsh.

Judge Sothy Boraleak questioned X as to why he didn’t tell the woman he had HIV or use a condom when he knew he had the disease.

In response, X said: “I knew I had HIV, but I was really in love with her and was ashamed of telling her.”

Provincial court prosecutor Sa Kanharith said that as X embarked on a sexual relationship with the woman despite knowing he had HIV, it meant he aimed to pass it on to her.

“I think he intentionally wanted the victim to get the disease. The provincial court sentenced him to seven years in prison, and after that, the Appeal Court upheld the original sentence.

“The verdict was made in accordance with the law. I ask the court to again uphold the lower court’s ruling,” Kanharith said.

X’s defence lawyer, who wished not be identified, said that after listening to the prosecutor’s conclusion and his client’s confession, he said the appellant did not have the intention to give the woman HIV.

From the start, the woman said she did not catch the disease during the affair.

“He does love the woman. He did not tell her about having HIV because he felt ashamed to do so. I ask the court to reduce his punishment,” he said.

Judge Sothy Boraleak said the Appeal Court would announce its verdict on June 5.