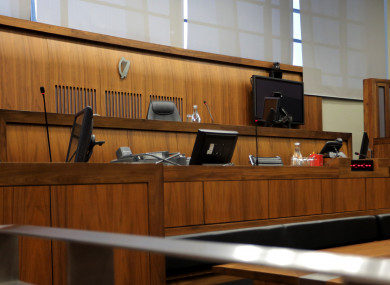 Described by his victims as a “predator” and a “terrorist,” X was sentenced to 7½ years in prison on Thursday for refusing to tell six women he is HIV positive.

X had unprotected sex with the women he’d met on dating websites between 2012 and 2013.

Earlier this year, X, 46, pleaded guilty to six counts of aggravated sexual assault, one of which occurred while he was out on bail for his earlier offences.

“What you are is a predator, you purposefully tried to infect as many people as possible,” wrote one of the women in a victim impact statement.

Prosecutors Janice Walsh and Kane Richards made a joint submission for the 7½-year sentence with defence lawyer Shamsher Kothari, which was accepted by Justice Robert Hall. With about five years credit for the time he’s already served, X has 30 months left on his sentence.

“He callously, in his own interest, had sex with multiple partners in multiple ways … without any regard for their safety,” said Hall in handing down his decision.

One woman, who can’t be identified because of a publication, ban also called X an unremorseful “terrorist.”

None of the women contracted HIV from the sexual encounters.

“They say we are lucky,” said a victim.

“We are mothers, daughters, friends and sisters, homeowners, graduates; we are your victims.”

Not only did X fail to disclose his status with five of the women, he actively lied to one who specifically asked him if he had any sexually-transmitted diseases.

X was found to have a “psychopathic personality structure,” according to a psychiatric report prepared by a forensic psychiatrist ahead of the sentencing hearing.

The report prepared by Dr. George Duska found X has a sense of entitlement, lack of empathy and no ability to take personal responsibility for his actions.

X is an “expert in calculated revisionist history,” is “comfortable violating others’ rights” and has a “disturbing absence of empathy, insight and self-awareness,” said Walsh who also called him a “virtual black hole of human emotion.”

Though the sex was initially consensual, it was X’s failure to disclose his HIV status that legally invalidated that consent.

This area of the law is murky and in flux in Canada. In December, the Ontario government announced it would not prosecute people with HIV who don’t disclose their status — if there is no realistic possibility of transmission.

The federal government has been asked to consider changes to the Criminal Code in light of scientific evidence that, if treated properly, risk of transmission is negligible.

At the time of his offences, X was not taking his medication, had a high viral load, and was a high risk to spread the virus. He also did not follow his clinic’s policy of seeing a doctor every three months.

He also did not use a condom with the victims, which can reduce the risk of transmission by 80 per cent, according to the agreed statement of facts.

A Calgary man has pleaded guilty to six counts of aggravated sexual assault.

The case involves six women and in each case, X failed to tell them he was HIV positive.

According to an agreed statement of facts, X would meet women on dating websites then have unprotected sex — never telling the women he had the virus.

“This is a situation where individuals are consenting adults involved in sexual acts and there is simply a non-disclosure aspect to that sexual contact,” X’s defence lawyer Shamsher Kothari said.

All of the sexual assaults happened between 2012 and 2013. They occurred throughout southern and central Alberta.

In one case, the victim found out X was HIV positive when she found a pill bottle — the label showed it was prescribed to treat HIV.

The agreed statement of facts states the woman had previously asked X if he had any sexually transmitted infections or medical history she should know about.

Police in both Calgary and Lethbridge issued warnings about X. As a result of those warnings, other women came forward alleging he failed to disclose his history prior to having sex with them.

There were also warnings posted on several dating websites — one person wrote “X is a danger.”

His lawyer says the guilty pleas are a sign of remorse.

Court documents show X’s viral load at the time of these sexual encounters would have been very high and he would have been quite infectious, putting the victims at “significant risk of HIV transmission.”

The women had to undergo rigorous testing over the course of six months.

“None of the individuals that were dealt with in court ever transmitted or received or were diagnosed with any kind of HIV. None of these individuals got HIV from any of the contact,” Kothari said.

Defence acknowledged X’s actions caused extreme stress for the victims. The women had to undergo rigorous testing over the course of six months.

Their identities are protected by a court-imposed publication ban.

X remains in custody. He’s been in remand for nearly two years.

He will now be sent for a psychiatric assessment.

A sentencing date will be set on March 2.

Not guilty pleas were entered Thursday on behalf of a Calgary man accused of having unprotected sex with three women without disclosing he is HIV positive. Defence counsel Andrea Urquhart entered the pleas for her client, John McNamara, who faces three charges of aggravated sexual assault.

Urquhart elected a trial by a provincial court judge, forgoing her client’s right to a preliminary inquiry. McNamara, who appeared in court via closed-circuit television from the Calgary Remand Centre, did not speak during the proceeding.

He is charged in connection with allegations he had unprotected, consensual sex with three women last December, in Innisfail, Alta., Airdrie, Alta., and Calgary, without revealing his medical condition. At McNamara’s bail hearing last month, Walsh said at least two of the women were into kinky sex. One contacted him through an online dating service called FetLife, which is designed to cater to fetish tastes like bondage and submissiveness, she said. Court also heard a second woman fell into a trance-like state called “subspace” where submissives can’t resist their sexual partners.

Calgary man accused of sex without HIV disclosure with three women held in custody until trial; lost housing due to media publicity

An HIV positive man who allegedly had sex with three women without telling them of his medical condition has been ordered held in custody until his trial. The latest sex-assault charge stems from an alleged offence in December, after the complainant and the accused met at a social function. John Joseph McNamara, 41, was previously charged by RCMP in February with the first two counts.

On Tuesday, provincial court Judge Karin Jivraj said he would have released McNamara, if not for three alleged breaches of court orders since he was granted bail in March on the first two aggravated sexual assault charges. “I’m not satisfied on a balance of probabilities the accused has shown cause why he should be released,” Jivraj said after hearing arguments by defence lawyer Andrea Urquhart and Crown prosecutor Janice Walsh.

“All of the substantive charges were before the court at that time and the court deemed he was releasable,” said Urquhart. She said he was able to obtain a residence, but lost it because of media publicity after he was charged with the third aggravated sex assault. After McNamara was out on bail on the first two similar charges, police issued a public warning that there was information the accused man had been active on online dating sites.

A 41-year-old man charged with aggravated sexual assault on two women, for allegedly having sex with them and not telling them he has HIV, has been granted bail. Provincial court Judge Harry Van Harten on Wednesday agreed with defence lawyer Andrea Urquhart that he could order John Joseph McNamara’s release. McNamara has been in custody since his arrest Feb. 22. He will next be back in provincial court in Airdrie, where one of the alleged crimes occurred, on April 4.