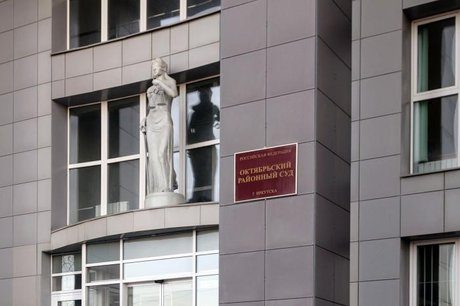 On October 24, the Oktyabrsky District Court found a resident of Irkutsk guilty of intentionally acquiring HIV. The man was sentenced to 2.5 years in a settlement colony. The prosecutor asked for him 3 years in prison.

In February 2016, a man infected with HIV entered into a relationship with an Irkutsk woman, without informing her of the disease and without using any means of protection. As a result, the girl was infected and went to the police. Details about this story IRK.ru told in the article “I live with HIV. First story: the struggle for justice . On the court session after the completion of the trial, read the article “Trust the guy. A girl in court proves the intentional infection of HIV . “

In Irkutsk, a court overturned a sentence to a criminal who deliberately infected his girlfriend with HIV

The victim’s lawyer Svyatoslav Khromenkov informed the reporter of SibReal about this.

In Irkutsk, today, December 26, a meeting of the appeal court was held in the Irkutsk Region Court on the suit of the defendant. In late October, the city court found him guilty of deliberate HIV infection and sentenced him to 2.5 years in a penal colony. At today’s meeting, the judge overturned this decision, drawing attention to a violation in the work of the investigators. “The criminal case was at some point terminated by the investigator, then this decision to terminate the criminal case was canceled – but it turned out that it was not authorized ” Khromenkov explained to the editorial board of SibReal. – Yes, this is a formality however, it must be eliminated, all court sessions should be resubmitted. This will not affect the conviction of the offender – on the contrary, we will use the opportunity and demand tougher punishment. Such is the practice of the European court and our civil lawyers D prophylaxis of HIV infection, at the March meeting of the UN, they expressed a similar position – in their opinion, people deliberately infecting with such a serious disease should be judged by Article 111 of the Criminal Code of the Russian Federation – for causing grievous bodily harm. There the term will be up to 8 years. And our society also speaks out for a more severe punishment for such criminals. 2.5 years in the colony of the settlement is, of course, too soft a punishment – after all, the girl’s health has been seriously harmed. ”

The human rights activist, on behalf of the victim, intends to file an application for the recovery of non-pecuniary damage to investigators who have made a mistake. “It turns out that this is already the second significant violation in the case on their part. We first discovered the second – the judge. It seems to me that this clearly indicates how poorly the investigation was conducted,” Khromenkov said.

The injured Irkutsyanka woman and her lawyer managed to reach a criminal case only a few months after the submission of the first application to the law enforcement agencies. At the same time, the girl had to look for some evidence on her own: for example, to prove close acquaintance and serious relationship with the accused, she restored on her phone joint photos that the man had previously deleted.

The accused changed his testimony twice: first he stated that he was not familiar with the victim, then he did not come into the vicinity with her. According to the lawyer, such cases are difficult due to difficulties in collecting evidence. However, in this case, the doctors conducted a rare genetic analysis of sequencing and 99.5% confirmed that the defendant had infected the victim. “Another medical study confirmed that the depth of the infection period in the victim coincides with the time when she lived with the defendant,” Khromenkov told SibReal.

In March, the Oktyabrsky District Court returned the case on the intentional contamination of Irkutsk women for further investigation because the investigator incorrectly numbered the pages of the indictment and did not sign the document.

Guilty of HIV transmission: a resident of Irkutsk was given almost three years in a penal colony

Today was the final court hearing

Today, October 24, a resident of Irkutsk was sentenced. The man entered into a sexual relationship with his beloved, without warning her that he was infected with HIV . The offender was sentenced to 2 years and 6 months in a colony – settlement.

Background: 35-year-old Ella Mironova (name and surname changed) met a beautiful man in 2016 and passionately fell in love with him. The young people git together. A month later, the girl suddenly fell ill with fever, malaise. She was taken to the infectious diseases hospital. Doctors said it was not the flu, but meningitis and the human immunodeficiency virus. Ella was in shock, because a year before that she had undergone a full examination, and nothing like this had been identified. Then she realized that she been “rewarded” by her beloved with the illness. After making inquiries. It turned out that the man had been registered with the AIDS Center since 1999. The girl tried to contact him, but he denied it. There was no way out, so she decided to go to court.

Lawyers called this case a precedent , and not only in Irkutsk, but throughout Russia . But Ella was lucky, the doctors and experts who worked in this case are 99.5% sure that it was this man who infected Ella.

Sentencing was postponed more than once, but today the offender heard his sentence. It should be noted that it was this Irkutsk woman who for the first time in Russia brought the case of HIV infection to court.

Judicial investigation in Irkutsk on a case of willful HIV infection

The Oktyabrsky District Court of Irkutsk completed its investigation into a case of deliberate transmission of HIV to a girl. The materials of the criminal case have been investigated, the witnesses have been questioned.

At a meeting on September 25, they announced the protocol of confrontation held in October 2016. This was petitioned by the defender of the plaintiff in connection with the contradictions in the defendant’s testimonies. At the request of the lawyer, letters of appreciation and other documents characterizing the identity of the plaintiff were attached to the case.

The prosecutor asked clarifying questions to both sides. They differed in their testimony around the site on which they met and for what purpose. The accused completely does not admit guilt and denies that he had sex with a girl. The criminal case was initiated in accordance with part 2 of Article 122 of the Criminal Code of the Russian Federation “Infection with HIV”. A man faces up to 5 years imprisonment.

On the eve of this case, the public prosecutor was replaced. In the next meeting will be the debate of the parties. The meeting was scheduled for September 27, but the state prosecutor asked more time to get acquainted with the case materials and prepare for the debate. The trial is scheduled for October 2.