Denmark suspended its HIV-specific criminal law in 2011. Prior to that, the first attempted prosecution for HIV exposure/transmission occurred in 1993, using a charge of ‘wantonly or recklessly endangering life or physical ability’ under the Danish Criminal Code. The case ultimately failed because the Supreme Court found that the wording of the law did not provide a clear legal basis for conviction. Two subsequent cases also failed, prompting the government to introduce a new offence: criminalising exposure to a ‘life-threatening or incurable disease’ (section 252, enacted in 1994). In 2001, HIV was the only disease listed (under Order 547) creating Western Europe’s only HIV-specific criminal law.

The law remained in place until February 2011, with both negligent and ‘intentional’ exposure covered. Conviction resulted in up to eight years’ imprisonment. The law included a defence if the accused disclosed their HIV-positive status prior to the act, or if safer sex was practiced.

In February 2011, the Danish Minister of Justice suspended section 252 noting that HIV could no longer be considered a life threatening disease because effective treatment is available in Denmark, making HIV a manageable, chronic health condition. The Minister formed a working group to consider whether the law should be amended or abolished. More than 120 civil society organisations from around the world congratulated the Danish Minister of Justice and the Minister of Health on suspending the law.

Twenty people are known to have been prosecuted under section 252, with 15 convicted. The first known case occurred in 1999. Data are only available for 19 of the 20 cases, with five of the accused known to be female. Only nine of the accused were ‘Danish’, with seven of African origin, and one each of Caribbean, European, and Middle Eastern decent, suggesting the law was not being applied without bias.

No prosecutions have occurred since the law’s suspension in 2011. It’s understood that the government began a process of reviewing all HIV-related criminal cases since 2007. That process led to at least one conviction being overturned (2012) on the grounds that HIV is no longer a ‘life-threatening condition’.

(1) Any person who, for the purpose of gain, or who purely wantonly or in any similar reckless manner, exposes the life or physical ability of others to impending danger shall be liable to imprisonment for any term not exceeding eight years.

(2) The same penalty shall apply to any person who wantonly brings about danger that someone be infected with a fatal and incurable disease.

Q&A HIV and the criminal code in the Nordic countries 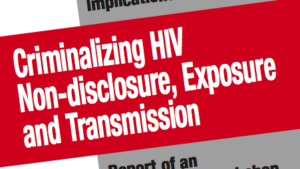