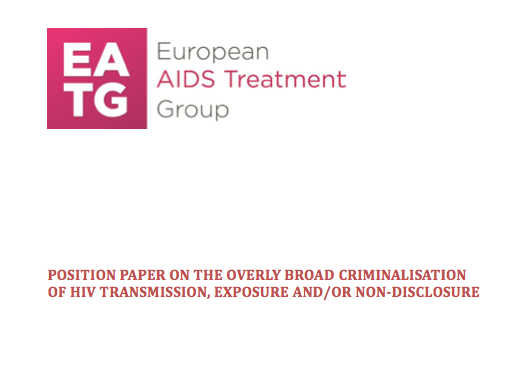 EATG’s new position paper on prosecutions for HIV non-disclosure, exposure and/or transmission published last week recommends that the criminal law should only be used in extremely rare and unusual cases where HIV is maliciously and intentionally transmitted and that Europe-wide standards of up-to-date scientific evidence limit overly broad use of the crimnal law.

Prosecutions for HIV non-disclosure, exposure and non-intentional transmission have been reported in 28 countries in Europe and Central Asia, but only eight of these countries have a specific criminal law relating to HIV.  The remaining 20 countries use laws not created to deal with HIV, such as those dealing with physical or sexual assault or, inappropriate laws relating to homicide or attempted murder.

Many of these laws and prosecutions – as well as inflammatory media coverage of these cases – misrepresent and overstate the risks of HIV transmission and the harm of living with HIV, contributing to increasing HIV-related stigma and perpetuating myths about HIV. Important scientific developments, including the significant impact of treatment on infectiousness – reducing the risk to nearly zero and improving life expectancy – are rarely taken into account. In turn, this may be deterring people with undiagnosed HIV from wanting to know their HIV status.

These laws and prosecutions are also having a negative impact on people aware they are living with HIV by creating confusion and fear over rights and responsibilities under the law, creating and sustaining disincentives to disclose HIV-positive status to sexual partners, and creating and sustaining disincentives to disclose HIV-related risk behaviours to healthcare professionals. These unintended negative impacts of the overly broad use of the criminal law are highlighted in the HIV Justice Network’s new documentary, ‘More Harm Than Good‘.

Earlier this year, the Joint United Nations Programme on HIV/AIDS (UNAIDS) released updated, detailed guidance to limit the overly broad use of criminal laws to regulate and punish people living with HIV who are

EATG supports the UNAIDS position that all HIV-specific criminal laws should be repealed and that prosecutorial and police guidance be created to limit the overly broad application of other criminal laws applied to HIV non-disclosure, exposure or transmission to only the most egregious cases, where malicious intent to transmit HIV can be proven, taking into account scientific, legal and human rights principles.

EATG applauds recent developments in several Western European countries in response to increased advocacy and attention to the above mentioned concerns, including Denmark and Switzerland, where HIV-related criminal laws have been suspended or modernised; in England and Wales, and Scotland where prosecutorial guidelines have been implemented, and in Norway and Sweden where there is significant political interest in reassessing their HIV-related criminal policies.

However, despite signs of progress there continue to be problematic developments within Europe, such as the arrest, forcible HIV testing and attempted prosecution for HIV transmission of 26 women in Greece in May 2012; Romania’s new HIV-specific criminal statute implemented in October 2011;and new prosecutions setting legal precedent for further prosecution under existing laws in Belgium in July 2011. In addition, many jurisdictions throughout Europe and Central Asia continue to inappropriately prosecute people living with HIV for non-disclosure, alleged exposure and non-intentional transmission.

In order to improve the situation in Europe and Central Asia, EATG

EATG argues that while there may be a limited role for criminalising HIV transmission in terms of achieving justice and/or punishment for wrongdoing in exceptional cases of malicious and deliberate HIV transmission that causes actual harm, the criminal law is too blunt and rigid a tool for dealing effectively with public health initiatives, controlling the spread of HIV, and deterring harm-risking conduct and is, therefore, detrimental to contemporary public health goals and human rights.

The full position paper is below