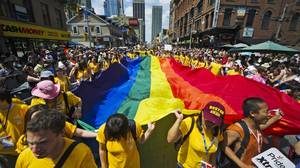 Two-thirds of men who have sex with men believe that people with HIV-AIDS should face criminal charges if they fail to disclose their status to a sexual partner. But that number varied a lot depending on circumstance, with 83 per cent saying non-disclosure before anal sex should be a crime, and 42 per cent saying failure to disclose HIV status before oral sex was a criminal act. Only 17 per cent said failing to disclose should never be criminalized. “The consensus is there should be legal measures in place related to disclosure,” Dan Allman, an assistant professor in the Dalla Lana School of Public Health at the University of Toronto, said in an interview. “At the same time, there is a feeling that legal measures won’t have an impact. There’s an innate understanding that disclosing your HIV status is hard and criminal laws aren’t going to make it easier,” he said.

The survey, dubbed Male Call involved 1,235 detailed interviews with men who have sex with men. The research shows that 26.2 per cent of respondents did not know their HIV status because they had not been tested recently; that number jumped to 50.6 per cent among bisexual men. Overall, 67.2 per cent of the men surveyed were HIV-negative, and 6.6 per cent HIV-positive.

Most of those who had not been tested said they were confident they were HIV-negative because their sexual practices put them at low risk. But a significant minority, 17 per cent, said they did not want to know their status, either because they could not deal with being infected or out of fear it could cause legal problems.

The fear associated with being HIV-positive was pervasive. The poll showed that 83 per cent of men worry about being stigmatized because of HIV, while 68 per cent fear being rejected by other gay/bisexual men, and 51 per cent fear being prosecuted for not disclosing their HIV status. 17.8% agreed that in the current legal climate it was better not to know your HIV status.