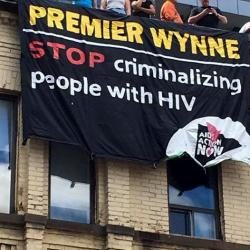 Ontario Canada Advocacy Campaigns
Source: http://toronto.gaycities.com/events/783044-hiv-is-not-a-crime-action-against-hiv-criminalization
HIV is NOT A Crime! – Action against HIV criminalization
Wednesday Feb 22 12:00pm-1:30pm in Toronto
AIDS Action Now! and Queers Crash the Beat invite you to tell the Attorney General that HIV IS NOT A CRIME!

Gather for a rally this Wednesday, February 22 @ 12 noon

Ontario continues to lead Canadian provinces in charges against people living with HIV for not disclosing their status, even when they have taken precautions to protect their partners, when there no risk of transmission, and when no transmission has taken place. People are being prosecuted for aggravated sexual assault, one of the most serious charges under the Criminal Code. Conviction carries a maximum penalty of life imprisonment and a mandatory designation as a sex offender for a minimum of 20 years.

Analysis of prosecutions shows a disproportionate number of charges against racialized people and a growing number against gay men. There is also deep concern that women with HIV who are in abusive relationships will face aggravated sexual assault charges in situations where they cannot safely impose condom use nor disclose their HIV status.

The current approach of the criminal law towards “risk” is completely out of line with current HIV science. It is clear, for example, that people living with HIV who have an undetectable viral load do not transmit HIV to their partners. Over 70 leading scientists working in the field of HIV expressed serious concern with the law in their Canadian consensus statement on HIV and its transmission in the context of criminal law (http://www.aidslaw.ca/site/wp-content/uploads/2014/06/Canadian-statement1.pdf)

The federal government has also expressed concern. In a December 2016 statement (http://news.gc.ca/web/article-en.do?nid=1163979), the Minister of Justice stated that,

“… the over-criminalization of HIV non-disclosure discourages many individuals from being tested and seeking treatment, and further stigmatizes those living with HIV or AIDS. Just as treatment has progressed, the criminal justice system must adapt to better reflect the current scientific evidence on the realities of this disease.”

As pressure increases at the federal level, we must pressure the provincial government! They are responsible for carrying out these laws, to act immediately to stop the overreaching and violent criminalization of HIV.

We echo calls from the Ontario Working Group on Criminal Law and HIV Exposure and demand that Attorney General Naqvi immediately takes the following actions:

1. Impose an immediate moratorium on all HIV non-disclosure prosecutions, unless there is alleged intentional transmission of HIV, while law reform options are being explored and sound prosecutorial guidelines are being developed – in conjunction with the community – to limit the current misuse and overextension of the criminal law.

2. Publicly state that the Ontario Ministry of the Attorney General is committed to ending the overly broad application of the criminal law in cases of alleged HIV non-disclosure and to reviewing Ontario’s approach to these prosecutions.

3. Engage in meaningful dialogue with the Ontario Working Group on Criminal Law and HIV Exposure (CLHE) as well as people living with HIV and scientific experts when developing prosecutorial guidelines and other responses to this issue.

For many years, community members have highlighted the injustices taking place and conveyed the unacceptable reality that such prosecutions are having a disproportionate impact on the most marginalized and vulnerable of persons living with HIV. It is time for Ontario to show true leadership. Unjust and harmful prosecutions must end NOW.