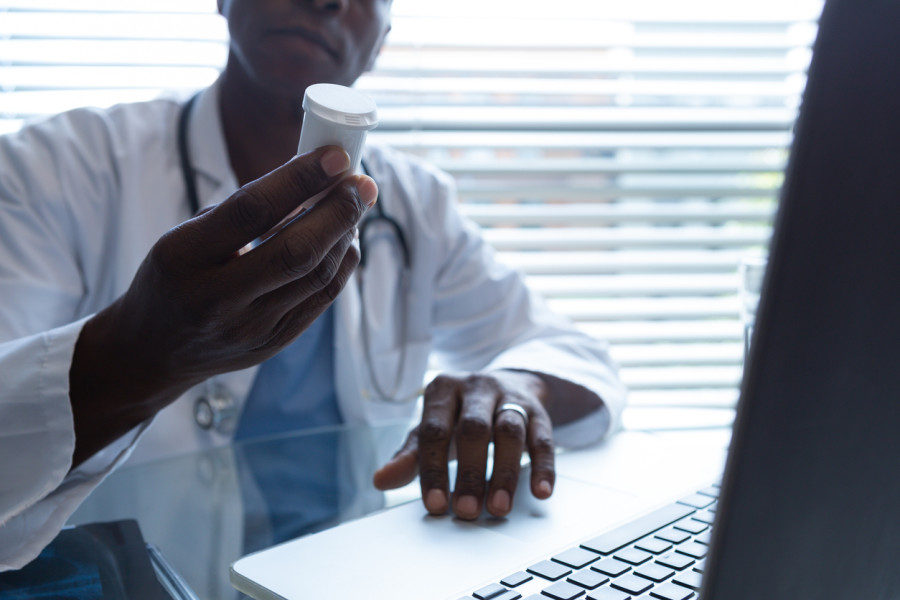 We Need to Talk About the Downside of U=U

I remember when I first heard the statement in 2017: the science-based evidence that stated people living with HIV taking antiretroviral medication who had attained an undetectable viral load no longer transmitted the virus. The slogan “U=U” (undetectable equals untransmittable) from that moment took on a life of its own—and I was all for it. I wrote about it, spoke about it, and even hit the streets to protest to ensure people were given access to this important breakthrough in HIV work. Now I feel differently. Three years later, the fight to reduce stigma using “U=U” as a framework has become nothing more than a gesture to prove that the bodies of people living with HIV are safe to have sex with, and I believe it has added another layer of oppression to Black people’s plight in the HIV epidemic.

Being an activist and advocate in this space for some time now, I’m always going to watch movements founded with white leadership with a critical eye—especially when HIV is an epidemic centered on Black queer folks, cisgender women, and transgender people. Movements seen through a white lens often have a blind eye to the most vulnerable and those who will be most affected. This movement is no different. The same people who are often left out of conversations around barriers to treatment are the same who are most harmed by a movement centering the optimal outcome—viral suppression as a marker of health above and beyond anything else.

It is true that being undetectable is what is recommended by every major medical and public health entity. However, undetectable doesn’t equal healthy, nor is it a status that, once attained, is always manageable—especially for Black queer and fem people. Furthermore, due to religious beliefs, inability to use treatment, barriers to care, or personal choice, we know that not everyone will be undetectable. That should be protected, and not othered. We should always be taking an approach to those living with HIV that centers the totality of their health, not their status.

I was first diagnosed with HIV in 2010. I didn’t start treatment until 2013. Much like seeing the phrase, “infectious disease,” made me cower, I would have been mortified seeing a movement like U=U. I was afraid to go to the doctor, afraid to take a pill for the rest of my life. There was no movement focused on my starting point. U=U doesn’t look like the goal to every person who is first diagnosed, and it puts the cart before the horse.

When I worked as a community health care worker, getting a client to an undetectable status was one of the goals, and not the main one. Shelter, finances, other health conditions, mental health, etc. were all a part of the “care” that we assessed with our clients. U=U is great as science and as a tool in the toolkit of care—not the entire toolbox. And its messaging is not reaching the community it claims to be saving or empowering; it is, rather, emboldening folks to weaponize status while creating a hierarchy within HIV.

I was recently made aware of an Instagram account dedicated to exposing individuals who were HIV positive but not undetectable, called “TheUndetectableList.” Although that account has since been taken down, it is movements like U=U that create an atmosphere for those who may not be undetectable—based on several factors and barriers—to be placed in dangerous positions.

Just like U=U, D can equal D, meaning Disclosure can equal Death. Much like the “It Gets Better” campaign around bullying, there was no system in place for those who, just by virtue of getting older, being queer or trans, things didn’t get better for. It was treating a symptom of the problem rather than the root cause. U=U is the “optimal” goal for medical professionals, while social justice activists and advocates understand that the picture of health for us has to be painted with much broader strokes to encompass all people.

Last year, Tamás Bereczky, with the European Patients Academy (EUPATI), penned an article for The BMJ about what he also perceives as the harm caused by this movement.

“Activists in developed countries have said that advocates in regions lacking access to drugs and testing should use the U=U message to call more strongly for improvements,” he wrote. “But this ignores the political, social, and cultural contexts in which people with HIV live.”

Bereczky also goes on to address the kind of bullying that other activists are experiencing globally if they raise questions about U=U as a framework. “The U=U message has spread readily among communities, but political barriers often make it impossible to be more vocal without advocates risking their liberty and physical integrity. Ideological dogma also acts against people with HIV as well as men who have sex with men, injecting drug users, sex workers, and prisoners—that is, the key affected populations.”

The U=U movement misses the mark on the population it claims to be aiming to prioritize at its center. HIV-positive people cannot be responsible for the burden of the work in ending the epidemic. We are often placed in positions where we carry the responsibility and accountability for the sexual health of others. Our “undetectable” status also shouldn’t be used as a badge of honor to tell people it is “safe to sleep with us” or interact with us without fear of contracting the virus.

Any time I see someone post their negative HIV test results, I push back. The U=U movement has in a sense emboldened the idea that negative status (or as close to it as possible) is perfection. It has created a new kind of class system within the HIV community, and a hierarchy of the bodies that society now deems as acceptable and safe.

Is U=U scientific fact? Yes. Is it important to educate people that when you get to an undetectable viral load, you no longer transmit the virus? Yes. Should a movement be centered on an outcome we scientifically know not everyone can achieve or maintain because of social, economic, and environmental determinants of health? Absolutely not. U=U is just like condoms, harm reduction, pre-exposure prophylaxis (PrEP), TaSP (Treatment as Prevention), and anything in the toolkit. It is one of the many tools that should be used, but it should not be sold as the end-all, be-all. U=U is unfortunately sold as the only marker for good health, which in and of itself is dangerous.

Another major factor is how the U=U movement is creating policy change in HIV criminalization that could be potentially harmful to the overall cause. U=U has been used to create reforms in states like North Carolina to reduce the chance of prosecution for people who can prove they have been undetectable for six months or longer, who do not have to disclose their status nor use a condom during sex. This approach centers our safety from prosecution based on our medical status and still puts many at risk, including those who are undetectable who would be required to prove that they were virally suppressed if someone accused them of nondisclosure or not using a condom—a person is only as undetectable as their last labs. Also, this approach puts no responsibility on lawmakers or health care institutions in states like North Carolina to ensure people with HIV can get into care and remain on treatment as easily as possible—the state still has not expanded Medicaid under the Affordable Care Act, which may exacerbate race and class health disparities in who can achieve viral suppression in the first place.

U=U as science should also be used to fight for Medicaid expansion or Medicare for All and to fight against attempts to not cover people with pre-existing conditions and the barriers to care that exist for so many. It should not be a movement as much as it should be a tool in the various ways we fight against HIV stigma, and for better health care. It also shouldn’t be used to create new laws that only protect those privileged enough to get an undetectable status.

Instead, U=U has become a slogan, a T-shirt, and a notion to people who are HIV negative that our bodies are safe to sleep with. It is classist and elitist. The ability to tell folks that we are undetectable should be a personal one. We can’t in one breath critique HIV-negative folks who post their negative results on social media and reinforce stigma that harms HIV-positive people, but then turn around and loudly boast about our own undetectable status. That too harms those who are detectable and many who are undetectable but discrete.

We should all be empowered by U=U for the science, and for the fact that HIV treatment over the past 25 years has advanced us to a place where people living with HIV no longer transmit the virus, and it can help us sustain a high quality of life. However, we need to be clear that U=U is not a viable option for everyone, and our fight must begin at the barriers as to why more can’t achieve it. Our goal is not a happy ending only some of us have been able to achieve. It should be a tool of encouragement for those afraid to be tested or those lost to care, not another campaign that inadvertently causes more stigma and separation.

Top-down movements have never worked—and this movement is no different. Helping those who start in the best position to get to undetectable or leading with that lens will only harm those most marginalized, who tend to be left out with the promise of, “We’ll come back for you later.” The same way Black Lives Matter can’t work unless All Black Lives Matter is the same way a U=U approach can’t work if all lives can’t get to the “U” of being undetectable—especially when overall health should be our main goal, not status-centered health. Movement work should center those most disenfranchised, not embolden others in a place of privilege to shame those who can’t attain that same status—pun intended.

U may equal U, but it certainly does not equal me and a lot of other people who may struggle to get there. My status is a small part of the total person that I am. As I’ve stated before, “My existence is an HIV campaign,” not my status. We must work to educate the world on U=U as science.