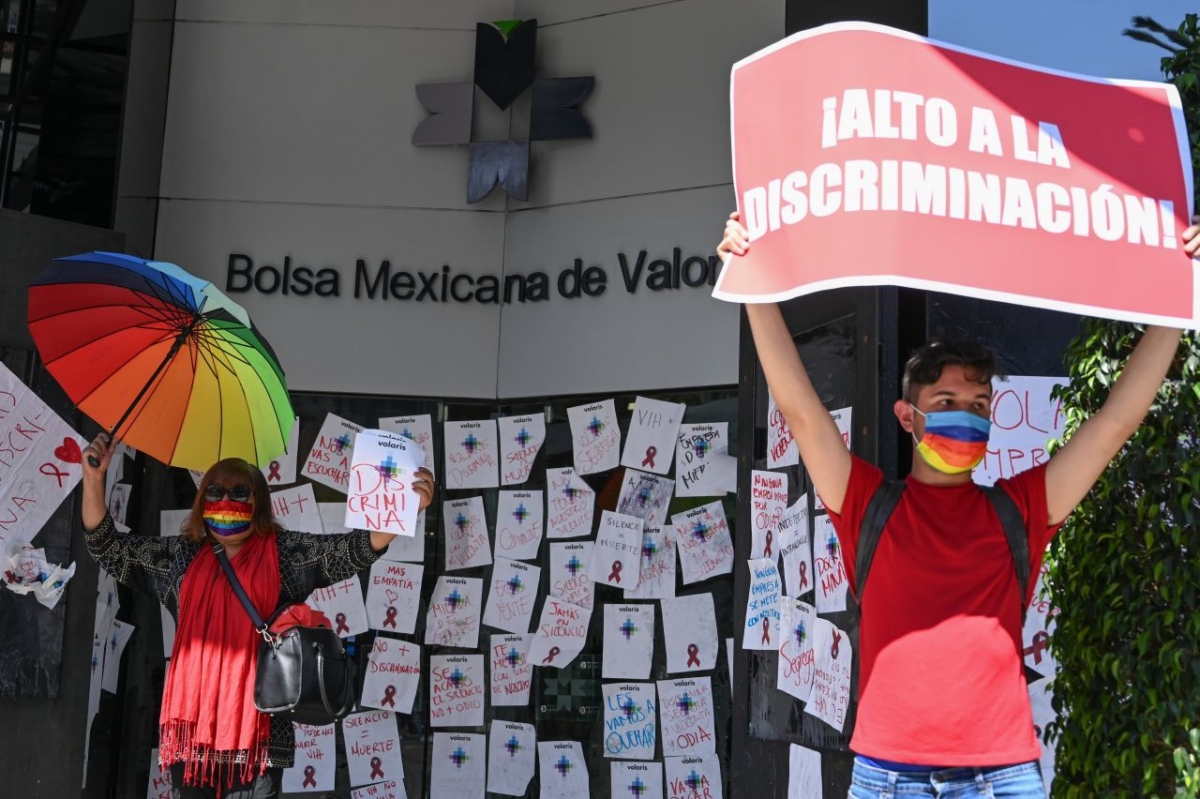 Automated translation via Deepl.com – For article in Spanish please scroll down.

In Mexico, with the exception of Aguascalientes and San Luis Potosí, 30 states retain the crime of “danger of contagion” in their local penal codes, a remnant from decades ago that only contributes to the stigmatisation and persecution of people living with HIV.

Coahuila and Tamaulipas provide penalties for “whoever transmits AIDS” in particular, but seven other states – Baja California, Oaxaca, Zacatecas, Puebla, Veracruz, Sonora, Yucatan and Nayarit – directly criminalise those who have a sexually transmitted infection and engage in conduct that could be considered “dangerous” to the health of another person.

Zacatecas and Nayarit also penalise a woman with a disease or syphilis who breastfeeds a baby.

In 17 states, criminal penalties imposed on a person for allegedly transmitting a disease can be aggravated by up to several years in prison, according to the study “La legislación mexicana en materia de VIH y sida. Its impact on people living with HIV”, carried out by the Mexican Network of Organisations against the Criminalisation of HIV.

Danger of infection, a crime that contributes to discrimination

In 20 states, a person with a chronic or incurable disease cannot be granted guardianship of a minor. Furthermore, in 19 states, a medical certificate stating that one does not have an illness is required as a condition of marriage.

These restrictions make it possible to “undermine some of the rights of people living with HIV,” the document warns.

In contrast, to guarantee the right to non-discrimination of people living with HIV, only 14 states consider HIV testing without consent or as a requirement for employment to be discriminatory.

Only 12 states identify stigmatising or violating the rights of people living with HIV as a discriminatory action, and only two states have passed and maintain HIV-specific laws.

“To begin with, the crime of contagion is a crime that is based on an assumption; it is not a crime that is scientifically verifiable, because there are not enough tools to be able to determine who did or did not transmit a virus to another person,” explains Leonardo Bastida, one of the authors of the analysis, in an interview.

Bastida says that there is still a lot of stigmatisation towards those living with HIV or who have a virus-related illness, as in the case of COVID-19.

“This causes people to be afraid of the situation, that they are not interested in getting diagnosed in order to avoid problems, because in a certain way, seeing this as something bad, does not generate a sense of responsibility, of personal and collective care.

At the same time, it also inhibits the generation of public health policies that should be focused on reducing the number of new infections; it also sends a message of negativity, guilt and punishment, when with the scientific advances that exist to date, the majority of people living with HIV can achieve undetectability and, therefore, non-transmissibility of the virus.

“There are codes that are very specific, that if the disease is contagious or puts people’s lives in danger; many adjectives are used that do not correspond to reality, so this image is given of associating it with something bad and that the person living with HIV, by that simple fact, is a risk factor, when in reality the risk factors are others; it generates a contradictory and somewhat ambiguous message for society,” adds Bastida.

Most of the articles in penal codes that punish the crime of “danger of contagion” came into force between 1920 and 1930, that is, they are almost 100 years old. Since 2015, attempts have been made to reform these articles, not to eliminate them, but to establish stronger sentences.

In at least seven states, cases have been prosecuted on the basis of this crime: 15 in Veracruz, 14 in Sonora, five in Tamaulipas, four in the State of Mexico, three in Chihuahua, one in Nuevo León and one in Mexico City.

“The prosecutors’ offices, seeing it in force in the law, insist on taking it up again; and often the argument is that the transmission is on purpose, a situation that cannot be ruled out, but for that there are already crimes of injury in the penal codes themselves, so a transmission with malice aforethought could be included in those terms. It is clearer than leaving an ambiguous offence, which is also only based on assumptions,” Bastida explains.

The danger lies in the fact that by accusing someone of the crime, if that person tests reactive, it is enough to prosecute them, when the only thing that is being checked is their state of health, but not whether or not they transmitted HIV.

“It is important to understand that what we are sanctioning is a belief, a hypothesis, but we are not sanctioning concrete facts,” he adds.

Antonio Matus, from the organisation AHF, maintains that the general tendency at the moment is to penalise, to punish for everything and to increase the number of crimes, so that when a criminal offence is eliminated there may be a general perception that there is injustice, which could explain the resistance in the legislative sphere to repeal this offence.

The group is currently working on legislative advocacy to present initiatives in Oaxaca, Veracruz and Guanajuato.

“Other countries have already made progress in this regard, and the Joint United Nations Programme on HIV and AIDS itself has issued several bulletins, in which, when such provisions have been repealed, UNAIDS has publicly acknowledged these actions. One of the most recent cases is in Colombia, where it issued a press statement welcoming the Colombian constitutional court’s decision to repeal the section of the penal code that criminalises HIV transmission,” Matus explained.

Having the legislative analysis in a document is very important because it makes recommendations to both state legislatures and the Congress of the Union to repeal criminal and civil provisions that stigmatize people with HIV.

Similarly, the federal Ministry of Health and CENSIDA are recommended to update NOM-010-SSA2-2010 on HIV prevention and control, which is more than 10 years old. Within it, there could be a provision that avoids criminalisation at the federal level, as it is mandatory.

On 30 April 2018, the Supreme Court of Justice of the Nation set a first precedent against the criminalisation of HIV, when it declared invalid the portion of Article 158 of the criminal code of Veracruz, which punishes the crime of danger of contagion, which specifically referred to “sexually transmitted or other infections”.

This ruling followed an action of unconstitutionality brought by the National Human Rights Commission (CNDH) over the legislative reform that added the explicit reference to HIV, sexually transmitted infections and others.

For the state of Nuevo León, an appeal, also promoted by the CNDH, against Article 337 bis, reformed in the context of the pandemic by COVID-19, is still pending.

Meanwhile, in Mexico City, an initiative to repeal the crime of danger of contagion has been presented three times before the local congress without success.

This follows demonstrations and complaints from civil society organisations after the Mexico City District Attorney’s Office publicised the arrest of a man living with HIV for the crime of endangering contagion on 4 June 2021. He was later released on the basis of an injunction.

The Mexico City Council for the Prevention and Elimination of Discrimination established that the criminalisation of danger of contagion fosters a narrative of violence and discrimination, and that the criminal offence represents a repressive vision of sexuality, advancing a punishment for mere danger based on prejudice, which obeys a criminal law alien to the paradigm of human rights and contrary to the principle of dignity.

For Matus, there are all the legal and public policy elements to repeal the crime. Otherwise, if it is transferred to other types of diseases, this type of criminal offence would cause people not to get tested, hide their diagnosis and fear being punished.

The activist argues that this, on a public health level, affects all people, not just those living with HIV.

These kinds of provisions, which may have the good intention of preventing transmission, ignore advances in science, as antiretroviral treatment currently increases defences in such a way that the viral load is reduced to undetectability, a state in which the virus is no longer transmitted.

“Without wishing to point fingers or criminalise people who consider themselves victims of this type of crime, we believe that the option for our society is co-responsibility, that everyone knows, is educated, receives information and is aware of what can happen when having unprotected sex,” he concludes.