The 29-year-old man gay accused of not disclosing his HIV-positive status to several men before otherwise consensual sex now faces 26 charges in Ottawa and further five charges in Kitchener according to the latest update from Canada’s gay newspaper and online resource, Xtra.ca, which continues to report responsibly about the case by not disclosing the names of the accused, unlike the mainstream press.

A 24-year-old co-accused Kitchener man also accused of not disclosing his poz status is facing two charges of aggravated sexual assault. He and the Ottawa accused man allegedly had a foursome with two other men in Kitchener. He has been on house arrest  since May. His next court appearance is scheduled August 24.  The accused has a Kitchener bail hearing scheduled there via video link on Aug 27. He was arrested on May 6. By the time his next Ottawa Sept 9 court appearance happens, he will have spent more than four months behind bars.

The 29-year-old man gay accused of not disclosing his HIV-positive status to several men before otherwise consensual sex has had his charges upgraded to include attempted murder, according to a report in the Ottawa Citizen.

The four counts of attempted murder were laid against [name of man] in relation to four of his alleged victims. [The accused] has also been charged with four counts of administering a noxious substance — HIV — to the four men. It now brings the total number of charges against [the accused], who is still facing 14 charges of aggravated sexual assault as well as multiple counts of sexual assault and breach of probation, to 31. [The accused] also faces seven charges in Waterloo on similar accusations.
[He] was arrested in early May after an 18-year-old Ottawa man [allegedly] contracted HIV after the two had unprotected sex several times in January. A bail hearing for Boone, which began Tuesday, is expected to continue next week. The evidence presented during that hearing is subject to a publication ban.

This is the third person to face attempted murder charges in Canada since the murder trial of Johnson Aziga.

In related news, a few weeks ago, Xtra.ca ran an article explaining to HIV-positive, -negative, and untested gay men what the law in Canada actually means. In particular, it highlights that Canada’s focus on non-disclosure is sending the wrong message: disclosure is “a lousy strategy for staying HIV-negative.”

Only having sex with negative guys? Think again. “Is asking your partners if they have HIV before having bareback sex a good way to prevent HIV transmission? The answer is no,” says Murray Jose, executive director of PWA Toronto. There are two main reasons for this. Firstly, according to the Canadian AIDS Society, about 20,000 Canadians — or 30 percent of Canada’s HIV population — are HIV-positive and don’t know it. Secondly, while most poz guys are committed to ensuring HIV ends with them, it’s a difficult subject to broach, meaning many people — whether poz or neg — have trouble discussing it, especially in the heat of the moment.

The good news from Canada didn’t last long. Within hours of the not guilty verdict in Vancouver, another gay man from Ottawa was being vilified in the press following an inappropriate press release from the Ottawa police.

Excellent work is being done following the intricacies of the case by Noreen Fagan and Neil McKinnon reporting for Xtra.ca.

They highlight the concerns amongst gay and HIV-positive advocates in Canada, and quote a regular blog reader, Michael Burtch, who is also a friend of the accused.

“It’s a witch hunt is what it has turned into. It’s very frightening for a lot of people in the HIV community to see what’s happening,” says Burtch. “The feedback that I have been getting from talking to people is that they feel as though it could just as easily be them. So there is I think a very strong swelling of support for [him] from the HIV positive community who feel a lot of empathy for his situation.”

Burtch is critical of the way the accused has been portrayed by the police and the mainstream media.

“Basically he is being presented as guilty before he has even had a trial. And all the actions that the police have taken are really just continuing to dilute the public health messages that practicing safer sex is everyone’s responsibility. I think we are really going to see that this is going to have a negative effect on testing in the city and its definitely going to have and effect on stigma and fear, discrimination and prejudice that HIV positive people are already dealing with on a daily basis.”

“I think that the Ottawa Police, despite their best intentions, have done a real disservice to the HIV community. And I am disappointed in the police liaison committee, I wish that they could have done more for him.”

Kathleen Cummings, the director of the AIDS Committee of Ottawa, agrees. She says that, while people may forget a name, they’re more apt to remember a face. “This is going to affect him for life,” she says.

Michael had previously been in touch to ask my permission to link to my blog in the invites to his annual birthday party fund- and consciousness-raising event, which takes place on May 20th.

On Thursday, May 20th, I’m hosting my annual Birthday Celebration.The party is in its third year and is a Birthday Celebration for yours truly, which doubles as an appreciation party for all my supporters who have donated cash, time, or talent to my numerous extra curricular activates as an activist and as a fundraiser.

This year’s event is tackling sexual stigma and prejudice, homophobia, sex workers rights, and protesting the criminalization of HIV transmission. It will feature the photography of Pat Croteau, who will be showcasing nudes of local community members to raise funds for P.O.W.E.R. – Prostitutes of Ottawa/Gatineau Work, Educate and Resist. (tinyurl.com/POWERottawa). 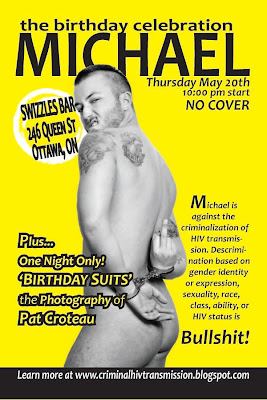 He added in his email last Friday, informing me of his friend’s arrest

I’m heart broken, and we here in Ottawa are rallying around him. Looks like my Birthday poster has taken on a whole new sense of urgency around here.

I fully support Michael’s efforts, and really feel for the entire HIV community in Canada. These are terrible times.