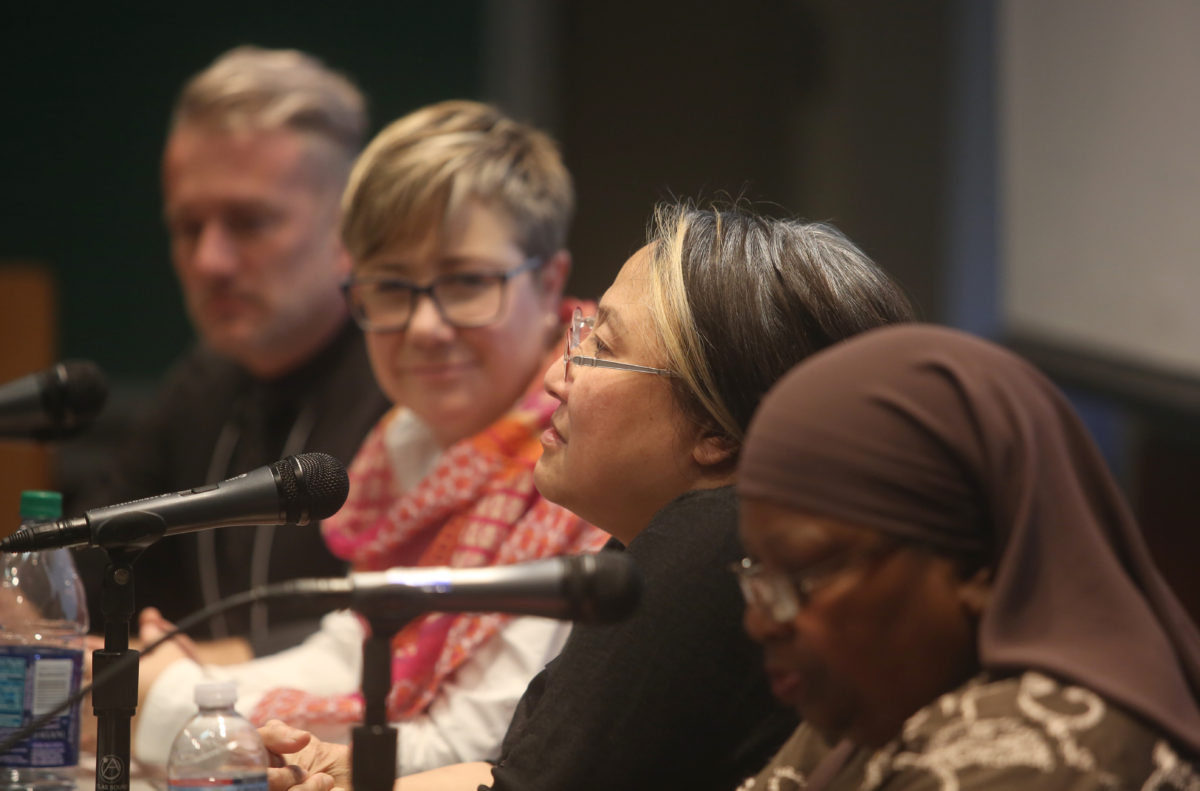 Panelists debate Research Justice and Ethics of Collaboration in HIV/AIDs Science at a Symposium of Scientific Ethics at Haverford College on Friday, October 21, 2016. Photo by Leigh Taylor

Every theory has a human price: Ethical research is collaborative research

Of all of the philosophical statements that I read and teach about what obligations – to accuracy or truth, to one another – might structure the inquiries of those who seek after knowledge, this statement, heard more than a decade ago from spoken word poet Alix Olson on an outdoor festival stage, has become my mental organizing principle.

What does this mean for ethics in research? Scientific inquiry is never neutral in its origination, its execution, or its interpretation. No research is done, not ever, in the absence of underlying theories about what questions matter, how these questions should be studied, who is a reliable witness to their own experience, what kinds of people and training are needed to interpret research results, and whether any obligations exist to use and share the outcomes. This reality is the reason that ethical research on social questions is research done in collaboration with those most affected by the questions and the outcomes.

My remarks today focus on three different research experiences: one that illustrates the pitfalls of the traditional “ivory tower” research process, one that demonstrates a concrete outcome difference between research done in isolation version with that done with affected communities and that informs diametrically opposed policies, and one that provides a fresh approach to academic-community research partnerships.

In 1994, I attended a conference in Atlanta, the National Skills Building conference, designed to boost the US HIV/AIDS response, in Atlanta. AIDS became the leading cause of death among all Americans age 25-44 that year. Three of my friends had died the previous month, in September 1994. I was 23 and they were the first friends I lost to AIDS. My own health was precarious. Diagnosed as HIV-positive in 1991, and with my immune system in free fall, I was five months from my own AIDS diagnosis. I share this information with you both to position myself in the examples I am about to share and to call on you to imagine – or to remember – the sense of urgency we felt, as people living with HIV and as people loving family members, partners, friends, and colleagues living with HIV, at that moment.

At that conference, one of the sessions I most highly anticipated was focused, at long last, on lesbians and HIV. As a lesbian living with HIV, and in contact with about a dozen other lesbians with HIV and their partners, we existed in an abyss of information: we had absolutely zero evidence-based information on whether women could acquire HIV from one another and, if so, what kinds of activities posed a risk. Safer sex information for women at the time was adapted from what was known about men’s sexual behaviours and risks. It centred around a strange fetish in public health messaging for dental dams (a fetish not shared by any lesbian I ever met).

As lesbians, whenever we had the chance to meet, we shared stories and any research we could get our hands on. The Lesbian AIDS Project at GMHC in NY provided a newsletter and resources that we scoured for information. As lesbian after lesbian shared stories about their own HIV acquisition from previous male partners, or drug use, or sexual assault, or transfusions, and as couple after couple shared their experiences of having no transmission between them, often despite years together without the knowledge that one partner was HIV-positive, we began to guess, but no one knew, the answers to fundamental questions about HIV transmission risks between women.

The conference session was packed. The U.S. Centers for Disease Control had finally invested resources in women-specific questions. Two women from the CDC presented their study and results.

What did they do?

They surveyed lesbians living with HIV to find out if they practiced safer sex with their female partners.

What did they learn?

A significant portion of lesbians said no.

What did they recommend?

Now, if the goal was to convince lesbians living with HIV to practice safe sex with our female partners, what we needed was even one case that demonstrated that it mattered. One case that showed it was worth it to give up a level of intimacy in order to protect our partners’ health.

Instead, researchers fiddled while Rome burned.

[From wrong questions to wrong answers to wrong policies]

Within the last decade plus a few years, legal and social science researchers have conducted research on whether the existence of a law that criminalizes people living with HIV for not disclosing their HIV status to a sex partner, potentially exposing another person to HIV, or transmitting HIV, has either negative or positive public health effects. Within this research program, a series of surveys has been conducted to identify the levels of support for such laws (laws which currently exist in 36 US states and territories).

While no positive public health outcomes have been identified and some small negative public health outcomes are suggested resulting from these laws, the survey results found generally high levels of support for these laws, including among gay men and people living with HIV. This has a policy effect: if constituents seem to support a law, politicians have no incentive to change the law, even when the law is discriminatory or unjust.

What was the survey question? “Should it be against the law for a person living with HIV to have sex without disclosing their HIV status?“

As part of a group of HIV advocates and researchers through the Sero Project in Milford, PA, almost all people living with HIV, we had a strong sense that public support for these criminal laws was more nuanced than the previous survey responses suggested. So we created new survey questions and asked them alongside the survey question used previously.

When we asked the original question, “should it be against the law for a person living with HIV to have sex without disclosing their HIV status?” our 3000 plus respondents, people living with and affected by HIV, showed support that mirrored that found previously (more than half thought non-disclosure should be criminalised).

But then we asked another question, of the same respondents, that gave more options. We asked: Should disclosure of one’s positive HIV status to a potential sex partner be … a norm that communities should uphold, an ethical obligation for PLHIV when safe to do so, important only when engaging in activities that pose a risk of HIV transmission, a matter for criminal or civil courts?

Suddenly, when provided with more nuanced options, support for criminalization dropped from more than half to just 11% of respondents. For those 11%, we went further and asked what kinds of penalties people ought to face for non-disclosure. While current prison sentences for non-disclosure often are 30 years or more, most respondents called for further education, counselling, and community service.

These differences – between the results from the survey question that excluded community participation, and indicated support for prosecution and incarceration of people living with HIV who are accused of non-disclosure, versus the results from the survey question created by people living with HIV, that indicated a need for counselling, education, and support – can have tremendously different effects on policy decisions about who gets prosecuted and incarcerated in our communities.

[Nothing about us, without us]

Finally, to end on a more positive note, I will describe a global research project with which I’ve been involved since 2008: the People Living with HIV Stigma Index. This project was developed by and for PLHIV and is led by an international partnership made up of the Global Network of People living with HIV, the International Community of Women living with HIV, and the Joint UN Programme on HIV and AIDS.

This project trains people living with HIV as interviewers who conduct interviews with other people living with HIV. The project focuses equally on obtaining rigorous data regarding HIV-related stigma and discrimination and on empowering local networks of people living with HIV to work together across their differences, to gain research, data literacy, and employment skills, to build relationships with national and local academics and health ministries, and to turn the resulting data into advocacy projects that challenge stigma and benefit the community. One theme throughout the project: the process is as important as the results.

Why was the project created? For one reason, it responds to a missing piece in the stigma research programme. Research focused on healthcare workers and what are known as “general populations,” in fact, everyone but PLHIV were asked about HIV stigma. The PLHIV Stigma Index fills this research gap and, crucially, recognizes that those experiencing stigma first hand have something valuable to share.

What has the PLHIV Stigma Index project achieved?

To give just a few examples: The PLHIV Stigma Index has been implemented in more than 70 countries worldwide, including recent US implementations in metropolitan Detroit and Baton Rouge and New Orleans, Louisiana. The rich data that networks have gathered in the experiences of living with HIV is used in UNAIDS reporting and as baseline data used in National AIDS Strategies around the world.

In Malawi, five networks of people living with HIV worked together to advocate for care for people who are incarcerated, better anti-stigma policies. A notable success in Malawi was the removal of staduvadine (D4T) – a particularly toxic medication no longer prescribed in wealthier countries – from the national formulary.

Everywhere the Stigma Index has been implement, we see empowerment and networking, challenges to internalized stigma, increased solidarity across different groups of people affected by HIV: gay men and other MSM, sex workers, people who use drugs, women and girls, heterosexuals, people of different faiths.

I tend to distrust dualisms, yet, even so, I stand by this next statement: if your research does not include those most affected by the questions you ask and the answers you receive, then your research excludes those to whom it matters most. This is not some kind of reasonable “exclusion criteria”. Rather, when engaging in research on question with social repercussions, exclusion is a refusal to accept the political and social repercussions of one’s research on people other than oneself, or to acknowledge the dignity, risk, and wisdom of those most engaged – often in physical, embodied ways and whose very lives may be at stake.

Deepest thanks to Professor Chris Roebuck, without whose vision this panel could not have come into being, and my sister panellists. It is truly an honour to share a stage with Waheedah Shabazz El and Cecilia Chung.