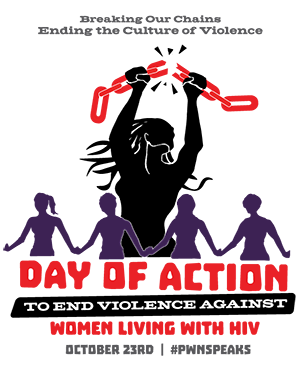 This is an event to create awareness about the levels of violence faced by women living with HIV, and to mobilise action to end that violence. As PWN-USA Executive Director, Naina Khanna, describes it: for women, violence is both a cause and a consequence of living with HIV.

The 2016 Day of Action takes as its focus a pernicious form of violence: the criminalisation of women living with HIV.

From the other side of Atlantic Ocean, in Eastern Europe and Central Asia, raising attention to HIV criminalisation as a form of violence against women living with HIV presents a new angle from which to examine how both of these phenomena are understood. Let us consider this intersection, where HIV-related stigma, HIV criminalisation and gender inequality place women at greater risk of violence, maltreatment and injustice.

Let’s take a closer look at Russia’s 12 cases against women living with HIV. In Russia, alleged HIV non-disclosure, potential or perceived exposure, and non-intentional transmission are penalized by up to a maximum of eight years in jail.

Examining the media coverage, none of these women had an opportunity to speak for herself publicly, and at least half of them were subjected to public ‘slut shaming’ in the media because it was alleged they had multiple intimate partners.

The other half of the women were prosecuted by their intimate male partners. The language of the publications depicts the women as irresponsible and unaccountable subjects, highlights their neglect of barrier contraception measures and of their responsibility to disclose, and characterises the women as the ‘source of HIV transmission’. Although it seems that the media were trying to be sympathetic toward these women, the media authors fail to excite pity with stories by adding details about their poor state of health, bearing children a young age, and/or that they pleaded guilty.

Stigma and discrimination, particularly where women’s moral conduct is judged, play a major role in the severe social and physical consequences that women suspected of being HIV-positive can face, impacting media, the legal system and community.

HIV-related stigma and discrimination switches the media’s focus away from the perpetrators of sexual violence and their punishment to speculations about the culpability of a woman-survivor.

HIV-related stigma and discrimination creates HIV-specific laws based on the assumption that women living with HIV are potential perpetrators in need of state control.

HIV-related stigma and discrimination impacts how communities see women living with HIV, potentially legitimizing even murder. This is especially relevant to religious and traditional communities, where the whole family may feel shamed because of the HIV-status of a female family member, and may fuel higher levels of domestic violence, but it goes beyond this.

In Russia, with its 400,000 women who have tested HIV-positive, the fear of partner violence persists as a daily reality. NGOs assess the number of sexual assaults and gender-based violence crimes against women- as 30,000 – 50,000 per year with only 10% of them reported to the police. In the Russian People Living with HIV Stigma Index study, one-fifth of the people with HIV who faced violence said it was perpetrated by their partner.

Indeed, starting from 2007, we have documented at least eight cases of brutal killings of women who either disclosed their HIV-positive status to their partners or were alleged by the killers or police to be HIV-positive. Thus, non-disclosure might be a coping strategy that women develop to try to survive against violence at home, while simultaneously risking prosecution as criminals because of the criminalisation of HIV non-disclosure.

Similarly, in Belarus, the five women who were prosecuted under HIV criminal laws were characterised in the media as frivolous women of easy virtue, alcohol abusers, and unable to take measures to prevent HIV transmission. Given that two of them were prosecuted for potential or perceived HIV exposure, although no transmission occurred, it is important to see how the prosecution started: the women informed their lovers of their HIV status after the sexual activity. In all media reports and comments by the prosecutor’s office, the women were depicted as those actively taking steps to transmit HIV to others; all are described in an active voice as criminals. In Belarus, law enforcement registers a low number of cases of violence against women along with high rates of women dying from violence at home, women with HIV were much more likely to report being physically abused by their spouses and partners.

In Ukraine, at least four women were prosecuted both for HIV transmission to their intimate partners or to both to their partners and their children, and for HIV exposure. There has been a glimmer of hope and reason from Ukraine, however, which might represent a less punitive turn since 2011.

We recently received information about a case in which a woman, accused of alleged non-disclosure, was acquitted. The court argued that “the relations that developed between the partners in their nature was about HIV exposure. Firstly, the crime didn’t constitute the HIV exposure, but only actions that could have been considered as exposure. Second, the pre-trial investigation and the prosecutor falsely assigned responsibility for creating such a threat of exposure to the accused.”

Further, the verdict found that the guilt of the sexual partner of the HIV-positive defendant in creating the threat of HIV exposure was greater than the guilt of the defendant, given that he was 16 years older than her, had more experience, including in relationships with women and had children from different women, and was characterized as having a promiscuous sexual behaviour. Overall, in Ukraine, the courts tended to respond to HIV criminalisation cases against women by reducing the penalty from time in prison to a suspended sentence.

In Kazakhstan, a woman living with HIV from Karaganda, was taken by the police to the AIDS Center to force her to take antiretroviral medication during her pregnancy. The media response discussed only the public health perspective, making the woman appear irrational and uncaring toward her baby. The media said nothing about the reasons why the woman was avoiding treatment, failed to give her a voice, and provided no information about whether social and psychological services were offered to her prior to police involvement.

Further, as documented by us, women in Kazakhstan, Kyrgyzstan and Tajikistan who are marginalized because they do sex work, have been disproportionately targeted by police, and found themselves subjected to forced HIV testing.

The criminalisation of sex work along with public characterisations of sex workers as ‘latent reservoirs for HIV’, sets sex workers up for police harassment, arrest, and unwarranted seizures in the name of public health.

In Kazakhstan, Almaty police identified 98 sex workers as HIV-positive and conducted a search for their clients. However, it remains unknown if the search brought further charges.

In Kyrgyzstan, the practice of illegal HIV testing in association with police raids on sex workers persists. Law enforcement personnel, in order to provide for the formal requirements of the law, summon AIDS center staff members, who obtain written consent to HIV testing under conditions of arbitrary detention. There are also known cases where the police detained sex workers and illegally sent them for forced medical testing, including for STIs and HIV.

Similarly, in Tajikistan, 505 sex workers were detained and forced to undergo HIV and STI testing. Community organizations report that often the test results are disclosed in front of other detainees and police staff.

One way or another, all of these can be also framed in terms of structural or cultural violence, in which social structures are used to justify direct violence or situations that drastically increase the vulnerability of women living with HIV to violence.

In the cases that we know, HIV-related stigma and HIV criminalisation evolve to a form of cultural violence that makes the communities and media audiences feel ‘right’ about blaming the women with HIV who experience an HIV-related prosecution, making this acceptable in our societies.

There is no doubt that gender shapes HIV disclosure motivations and reactions. Disclosure is not a gender-neutral event because women face the possibility of increased violence afterwards. It is an impossible choice: choosing between the immediate need to protect themselves from partner violence, or a risk that they can go to prison for alleged HIV non-disclosure, exposure, or transmission.

No matter where it occurs, it is time to claim justice for women living with HIV.