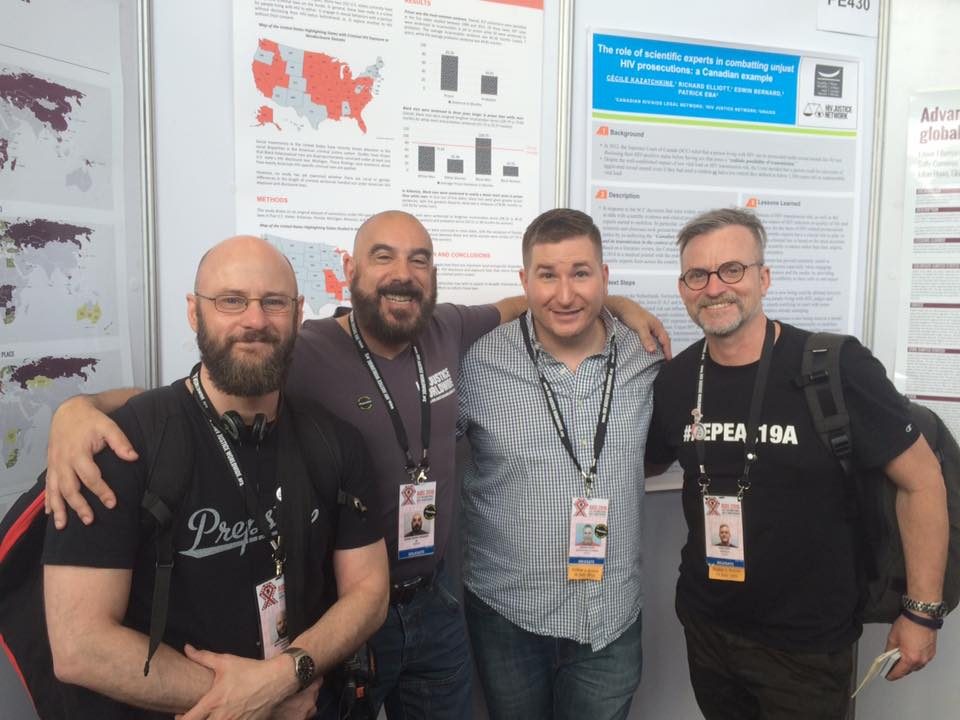 (R-L) Paul Kidd, Trevor Hoppe, Edwin Bernard and Nicholas Feustel in front of some of the many posters on HIV criminalisation presented at AIDS 2016

(R-L) Paul Kidd, Trevor Hoppe, Edwin Bernard and Nicholas Feustel in front of some of the many posters on HIV criminalisation presented at AIDS 2016

Participants at AIDS 2016 saw a remarkable number of posters on HIV criminalisation and legal reform, with 22 posters presented, providing data and strategies from 19 countries, three regions, and the global response. While the conference included some strong panels that focused on advocacy and legal environments, for the most in-depth information on movements to address HIV criminalisation and other human rights abuses, the action was in the poster hallways.

Of these posters, eight focused specifically on HIV criminalisation.  The poster on “Global Trends in HIV Criminalisation”, documented 72 countries with HIV-specific criminal laws, including 2 recent, overly broad, criminal laws passed in Uganda (2014) and Nigeria (2015). Between April 2013 and October 2015, 313 arrests and prosecutions were identified in 28 countries, with the highest numbers of arrests occurring in Russia, US, Belarus, and Canada (see Advancing HIV Justice 2 for more details).

From Victoria, Australia, Paul Kidd and colleagues described the successful advocacy process they followed to repeal the discriminatory HIV law. Their strategy for success combined four key factors: drawing attention to the disproportionately high numbers of prosecutions in Victoria, combined with international attention resulting from the AIDS 2014 conference, plus joining their efforts to the momentum from the global movement to end HIV criminalisation, with, above all, dedicated and strategic local activists willing to work tirelessly with parliamentarians, judges, and other civil society organizations.

download all the posters in one pdf file here

The role of scientific evidence in legal reform was highlighted in Kazatchkine and colleagues’ description of a scientific consensus statement on HIV and the criminal law by 6 Canadian scientists and clinicians. Organized to counter the troubling 2012 Canadian Supreme Court interpretation of the law, the consensus statement has been successful in mobilizing experts (with 75 expert sign-ons) and in gaining lower court decisions to reduce or drop HIV C charges.

Disparities in the use of the criminal law on HIV against racial and key population groups were the focus points of two posters from the US: in a study of HIV-specific laws in five Southern and Midwestern states, African American men with HIV received prison sentences that were three years longer, on average, than those to which white men were subjected; an examination of California’s HIV-specific laws found that sex workers were charged in 95% of the cases and were found guilty 100% of the time.

Another two posters closely examined the provisions of specific criminal laws.  Eba and colleagues found that 24 of the 26 laws passed in the last 15 years in sub-Saharan Africa contained provisions that ran contrary to the six guidelines in the 2013 UNAIDS guidance note on ending overly broad HIV criminalisation. The most frequent problematic provisions were those that allowed prosecutions even if the person with HIV: did not know her/his status, was on effective treatment or had a low viral load, disclosed her/his status, or used a condom. Further, in 16 countries, the provisions of the law were so vague that women could be charged for HIV transmission to their children during pregnancy, delivery, or breastfeeding.  An analysis of the French law by Celse and colleagues showed similarly problematic provisions, namely, that the law allows prosecution in the absence of transmission and that, although condom use can be a defense, neither disclosure, consent, nor the lack of knowledge of one’s HIV status are total defenses under French law.

Posters from Jamaica and from Canada examined strategies for legal reform. These provide lessons for HIV criminalisation movements: through a description of the on-going legal challenge in Jamaica to prohibit LGBT discrimination by private actors (the media, in this case), Tomlinson and Elliott demonstrated the importance of long-term vision, funding, and ability to sustain the struggle. From Canada, Hon Chu and colleagues described the byzantine process of legal reform for sex workers. The message for marginalized groups: be prepared for a long struggle, maintain strong ally relationships, and recognize that two steps back may follow one step forward.

While not specific to HIV-criminalisation, six posters discussed tools for legal reform.

An additional five posters shared strategies for providing legal services and knowledge of rights for marginalized groups of people, including: