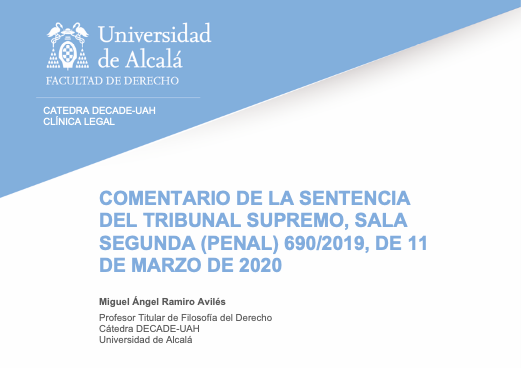 The Spanish Supreme Court has set an important precedent for HIV criminalisation cases, making it clear that it is not solely up to the defendant to prove that they disclosed their HIV-positive status, as other factors can inform a court’s judgement about whether or not a complainant knew the accused was HIV-positive. The ruling should also make it more difficult for people to pursue vexatious or ‘revenge’ cases against ex-partners.

As outlined in a (Spanish-language) analysis by Professor Miguel Angel Ramiro Avilés, Legal Clinic Coordinator at the University of Alcalá, this decision is an important step forward in the construction of a rights-based HIV response in Spain, permitting a defence based on the principle of dubio pro reo, and the constitutional guarantee of the presumption of innocence.

However, in his conclusion he notes:

Finally, at no time during the proceedings before the Court was the relationship of causality questioned, and an attempt was made to carry out a phylogenetic analysis; nor was the question of [the defendant’s] viral load raised before the Court. This is a step in a long road ahead.

Spain does not have an HIV-specific criminal law – nor a law requiring HIV disclosure – instead relying on general criminal laws relating to injury to prosecute potential or perceived HIV exposure, or alleged HIV transmission.

However, informed consent (usually obtained by proving prior disclosure of known HIV-positive status by the accused to the complainant) can be a defence, as is the case in most jurisdictions using general criminal laws, and so cases hinge on whether or not a complainant was aware of an accused’s HIV-positive status before sex occurred and consented to the risk of ‘harm’.

The March 2020 Supreme Court decision relates to the case of a woman who began a romantic relationship with the defendant in 2012, living with him for approximately 18 months. She was diagnosed HIV-positive in September 2013. Police were called to their home in June 2014 following an argument. They separated approximately three months later.

Following the separation, the woman complained to the police based on her belief that she had acquired HIV from her ex-partner. The police filed an assault charge using Article 149.1 of the Spanish Penal Code: causing aggravated injury. The charge was based on her assertion that if she had known her partner had been living with HIV, she would not have had condomless sex with him.

After an initial ‘not guilty’ verdict at the Provincial Court of Madrid (due to the complainant’s inconsistent testimony), the case was elevated to the Supreme Court. Like the Provincial Court, the Supreme Court did not consider evidence relating to whether or not the man had actually transmitted HIV to the woman (considering neither viral load nor phylogenetic analysis), accepting the assertion of HIV transmission at face value. Instead, the case hinged on the credibility of the woman’s testimony and associated evidence, as considered through a lens of dubio pro reo, (‘in cases of doubt, then for the accused’; i.e. innocent until proven guilty.)

The woman testified that she had specifically asked her ex-partner whether he had HIV and he had denied it, so she did not know he was HIV-positive.

The court, however, was not convinced that she was unaware of his HIV-positive status for a number of reasons. She testified that she had used cocaine and hashish with him, which suggested to the Court that she knew he engaged in ‘high risk’ activities associated with HIV transmission. A former friend testified that ‘the entire neighbourhood knew’ that the accused had HIV, so he could not understand how the woman would not have known. The accused’s sister had also warned the woman to ‘protect herself’ and ‘take measures’: the sister said she was sure that the woman had understood her meaning given the context of their conversation.

Medical evidence showed that during the relationship the defendant had visible lesions on his penis, which worsened during and after sex, which the Court found the woman must have seen and understood to be evidence of a sexually transmitted infection.

Further, the court took a dim view of the fact that she reported her partner only after their separation, making no mention of the issue after her diagnosis or when police attended their home months earlier.

The Court considered several points of law, including how to evaluate the available evidence. The judgement outlines that, generally, criminal law is not an appropriate tool where a person understands the risk; has as much control of the risk as the other party; consents to the act causing injury; and is injured as a result. These factors are comparable to a person deciding to have condomless sex with a partner they know has HIV, knowing that doing so can transmit HIV, with HIV transmission resulting.

Consequently, the Court found that instead of needing to focus legal analysis on the ‘presumption of innocence’ in relation to the accused, the appropriate principle to be tested was dubio pro reo, which tests whether ‘a credible doubt arises as to the veracity of the assertion of facts’. This principle means that, if ambiguity is found, the matter should be resolved in favour of the more lenient finding.

Ultimately, the court dismissed the charges of aggravated injury as the court found there was “a reasonable doubt as to the ignorance of the woman about the health status” of her ex-partner. The decision suggests that the woman could have deduced or may have known her partner had HIV.

Acknowledgement: Thank you to Miguel Angel Ramiro Avilés for making his analysis of the court decision so promptly available to HJN.