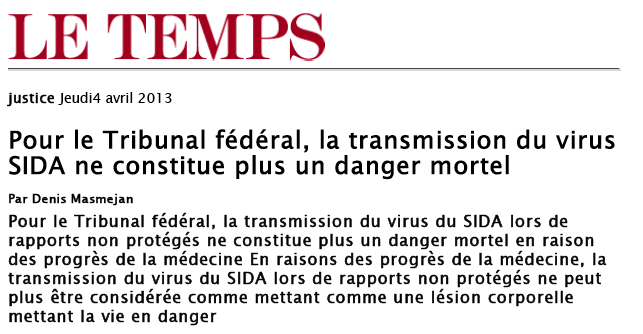 The Swiss Federal Supreme Court has ruled that HIV infection may no longer be automatically considered a serious assault, due to improved outcomes in life-expectancy on antiretroviral therapy.

Case 6B_337/2012 was heard on 19th March 2013 and published on Wednesday.  This note, written by Sascha Moore of Groupe sida Genève, explains the ruling in detail.

In a recent ruling, the Swiss Federal Supreme Court revisited its long standing jurisprudence on the severity of an HIV infection. Since 1999 (BGE 116 IV 125), any transmission or attempted transmission of HIV has been deemed to inflict or attempt to inflict severe harm and qualifies thus as an offence under article 122 of the Swiss Criminal Code relating to serious assault.

The appellant had appealed his conviction by the Superior Court of the Canton of Zurich under both article 122 and article 231 of the criminal code pertaining to transmission of human diseases for transmitting HIV to a sexual partner. The Superior court had imposed a 30 month partially suspended custodial sentence.

In the third part of his appeal, the appellant objected to the qualification of transmission of HIV as a serious injury on the grounds that, although still an incurable chronic medical condition, HIV infection is well managed thanks to current medical treatment. Life expectancy of individuals living with HIV is now nearly equal to those of persons not infected and as a result of this progress transmission should only qualify as common assault under article 123 of the criminal code.

The Federal Court agreed with the appellant to the extent that recent scientific progress and current treatment options lead to the conclusion that HIV infection does not necessarily constitute a serious threat to life. The Court nevertheless held that HIV infection still causes complex and life-long physiological and psychological changes which in some cases may lead to serious or even life threatening harm.

Serious assault is punishable with a custodial sentence not exceeding 10 years, whereas the maximum sentence for common assault is 3 years. The courts reversal will certainly limit some sentences to the maximum of 3 years for common assault whereas the average sentence for HIV transmission or attempted transmission had previously varied from 2 to 4 years in cases where 122 and 231 were applied concurrently.

As opposed to serious assault which is prosecuted ex officio (without complaint), common assault is prosecuted ex officio only for those exceptions provided in paragraph 2 of article 123 that cover use of poison or weapons, assault on persons in the care of the accused or unable to defend themselves and finally assault on spouses, registered partners or cohabitating partners.

The case is remanded to the Superior Court for a fresh determination whether the conduct in question may be qualified as common or serious assault.