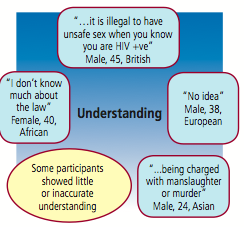 People living with HIV in Manchester appear to have little understanding of their rights and responsibilities under English law to avoid prosecution for ‘reckless’ HIV transmission, according to a study presented to the British HIV Association Conference in Liverpool earlier this year.

Matthew Phillips and Gabriel Schembri surveyed 33 individuals (85% male, 64% gay, average age 36) attending the Manchester Centre for Sexual Health. The questionnaire contained four key prompts to discuss personal understanding of the law in relation to HIV. Participants were invited to write as much or as little as they wished in response to each of the prompts.

When asked if the law had ever been discussed at their HIV clinic, or where they got their information from, many answered ‘no’ or ‘none’.

The authors concluded that

People living with HIV sometimes have a weak grasp of how the law relates to their behaviours, which places them at greater risk of prosecution in addition to unfounded fears about what is actually prosecutable in England and Wales. Relating HIV to the law brought out a complex range of issues, ranging from technicalities of how to disclose in relationships to morality of transmission. Participants considered relationship status to be important in relation to the law rather than actual transmission risk. Using Grounded Theory to inform a hypothesis, we can hypothesise that information regarding the law in relationship to HIV transmission is not reaching those actually living with HIV. Effort must be made by clinicians and advocacy groups to ensure that PLWHA have accurate information about the circumstances under which prosecution may occur, with sensitive exploration of beliefs which may impact on this understanding.

The poster of their presentation is below. The full text is currently in press in the Journal of the Faculty of Reproductive Healthcare.

Phillips M, Schembri G. HIV Transmission and the Law- What Do People Living With HIV Understand?