The British tabloid press had a field day yesterday following the sentencing of Nkosinati Mabanda, 44, at Wolverhampton Crown Court for ‘reckless’ HIV transmission. He received a four year prison sentence; was also given an anti-social behaviour order (ASBO) ordering him not to have sex without first revealing his HIV status (unclear if this also covers his time in prison); and will be considered for deportation following his release.

Of note, the only successful prosecutions for ‘reckless’ HIV transmission in England & Wales since 2004 have taken place when the defendant pleaded guilty.  (See this table of all UK cases from NAT – an additional heterosexual case in Wood Green, London, was dismissed in March 2011 due to lack of evidence).

In fact, Mr Mabanda had tried to change his guilty plea (and his legal representation) when he realised how difficult it was to prove the charges he’d already pleaded guilty to. He was not only unsuccessful, but did himself no favours by having a further sexual relationship with another woman (who did not test HIV-positive) in the two years he was out on bail.  (The first report of his case, from December 2009, is here.)

Since Mr Mabanda’s country of birth is Zimbabwe (he apparently migrated to the UK in 2004), the two right-wing tabloids, The Sun and The Daily Mail pandered to their readers’ prejudices and characterised this human being who had make mistakes (as human beings do) as an ‘HIV Monster’. 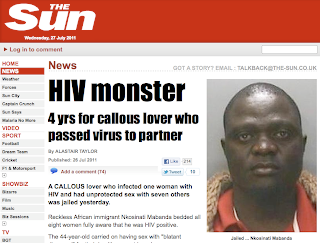 The term “HIV Monster” and its variant, “HIV Avenger”, has been around since the late-1980s. The idea that a person with HIV is no longer human but a “monster” was established by the myth of “Patient Zero,” a key figure in Randy Shilts’ bestselling 1987 book about the AIDS epidemic, And the Band Played On. “Patient Zero” was characterised as a sociopathic individual who may have intentionally infected others following his AIDS diagnosis, behaviour for which, Shilts suggested, the coercive powers of the state were ineffective. This myth has since been replayed many times worldwide and is often the impetus for calls for new HIV-specific laws and/or tougher sentencing.

Certainly, readers’ comments suggest the tabloids did their job of dehumanising Mr Mabanda – many calling for his death, castration or, at the very least, immediate deportation to what they hope will be a certain and painful death in the absence of HIV treatment in his native Zimbabwe.  Anti-immigration (and anti-African) sentiment is also widely expressed.  The comment below is illustrative of all of the above, and yet also alludes to the difficulties of disclosure due to HIV stigma. (Of course, having children if you are HIV-positive is neither “off the cards” nor “selfish” – it is possible to conceive and give birth with minimal risk to a sexual partner or infant and many people with HIV can, and do, have children with the full support of their doctors, partners and families.)

The content of the stories – if not the tabloids’ headlines –  take their facts and their moral tone from a police press release, and the words of the complainant.

Superintendent Jan Thomas-West, from West Midlands Police, said: “The particularly disturbing element of this case is Mabanda’s blasé attitude towards his victim and his various other partners.

“Mabanda told officers that he had had sex with nine women in the UK and that seven of them had not know he was HIV positive. Unfortunately, these women were impossible to trace.

“He seems to have shown no regard for the health of others or the potential life sentence he may have passed on to anyone who had sex with him.

“His victim will remain on medication forever and her life expectancy has been reduced as a direct result of his actions.

“I am pleased that Mabanda has received a significant custodial sentence today.”

West Midlands police subsequently circulated a second email quoting the complainant, parts of which were used in the The Sun and Mail stories.

Further to this release, please find below a statement from his victim, who wishes to remain anonymous:

“I am pleased with the sentence given to Mabanda today and that the judge recognised the seriousness of what he has done.

“I feel a combination of anger and relief. Anger at what he has done to me and potentially other women and relief because he has been punished for his actions.

“I think he should have been given life because that’s the sentence he has given to me.

“What he did has had a devastating impact and will affect me every day for the rest of my life, but now I want to move on.

“If anyone else recognises him because of the media coverage and they have been infected, they should go to the police and I will be there for them.”

The complainant also gave interviews to the local paper, The Express and Star and to BBC Radio 5.

She said: “He should have been given life because that’s the sentence he has given to me. He’s just scum. I hope he’s deported because I hate him.

“I’m on medication now for the rest of my life.”

And in the BBC interview she highlights that Mr Mabanda knew he was HIV-positive “before he came to this country.”
I have a great deal of compassion for the complainant, who also admits in the BBC interview that she knew nothing about HIV (including, obviously, how to protect herself) before she discovered from Mr Mabanda’s fiancée that she was at risk.
But there appears to be no attempt to understand how Mr Mabanda acquired HIV himself; continued to have multiple concurrent relationships; and felt unable or unwilling to either use a condom or disclose to most of the women he encountered. (Interestingly, though, he had disclosed to two of the ten women.)  The only evidence of any kind of understanding of Mr Mabanda’s issues comes from Twitter.