Members of the armed forces are subject to military law in the United States, which contains its own criminal provisions interpreted by military courts. There are no HIV-specific laws under the Uniform Code of Military Justice, however HIV ‘exposure’ has been prosecuted under general laws.

Until 2022, there was a blanket ban on people living with HIV enlisting in the military. In June 2022 this was partially lifted, with those who have an undetectable viral load now able to join the military, and in November 2022 a legal challenge against the remaining aspects of the ban was filed. Routine testing is undertaken on military members and anyone found to be living with HIV may remain in the service providing they agree to comply with restrictions on their behaviour through ‘safe-sex orders’, which often include requirements to disclose status to sexual partners, avoid sexual activity posing a ‘significant’ risk of transmission, and use condoms, as well as more restrictive measures such as to ensure that sexual partners do not come into contact with semen, saliva, or other fluids during sex. Violations of these orders by people who had enlisted earlier and were subsequently diagnosed with HIV have resulted in prosecution on multiple occasions, often in combination with general criminal provisions (see below). Despite their overly broad and restrictive nature, these orders have been held to be lawful.

People living with HIV have been prosecuted under general assault provisions of the Military Code for HIV ‘exposure’. For decades, military courts had ruled that ‘exposure’ could be prosecuted under the ‘aggravated assault’ provision, which requires the use of a dangerous weapon or conduct likely to cause death or grievous bodily harm. The Court had adopted a unique legal standard for determining when the required ‘likelihood’ threshold was met, stating that it was not a question of statistical probability of HIV transmission, but rather a question of the likelihood of HIV resulting in serious harm if it was transmitted. This led to several convictions, including in a case where status was disclosed prior to consensual sex.

In a landmark 2015 ruling, this precedent was overturned. A man living with HIV had been convicted for aggravated assault and given a sentence which included eight years’ confinement and a discharge from the military for engaging in oral and protected and unprotected vaginal sex. There was no suggestion that he intended to transmit HIV or that transmission occurred. On appeal, the Court heard medical evidence which demonstrated that the risk of transmission from these acts ranged from zero to 1 in 500. The Court then adopted a new legal standard, ruling that this extremely low risk could not be taken as meeting the elements of the offence. It did however affirm a lesser assault offence on the basis that a lack of disclosure meant there was no informed consent (following a 1998 Canadian judgement which has formed the basis of Canada’s highly problematic HIV laws). This ruling has since been upheld and has become the new standard used by military courts, which limits the scope of criminalisation for HIV ‘exposure’, but does not preclude it.

The Military Code also contains a catch-all, ‘general article’, criminalising any conduct deemed ‘prejudicial to good order’, which has been used to criminalise HIV ‘exposure’.

US: Court of Appeals for the Armed Forces appears sympathetic to change in legal standards regarding HIV risk in 'exposure' cases

END_OF_DOCUMENT_TOKEN_TO_BE_REPLACED 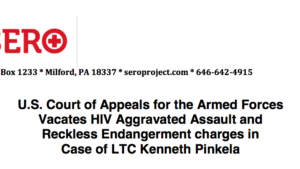 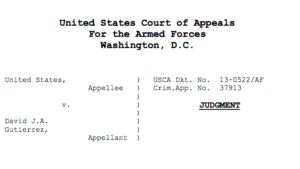 US: Military court sends Naval officer to prison for unprotected sex with disclosure

END_OF_DOCUMENT_TOKEN_TO_BE_REPLACED 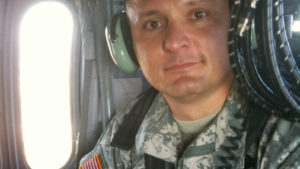 US: Rolling Stone magazine covers HIV criminalisation and life as a person living with HIV in the US armed forces 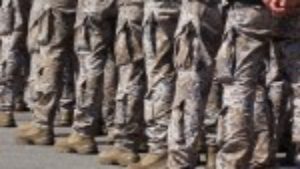 US: Congress passes amendment allowing for review of US military policy on HIV non-disclosure/exposure prosecutions

Exposing the 'Office of Medical and Scientific Justice' by Seth Kalichman