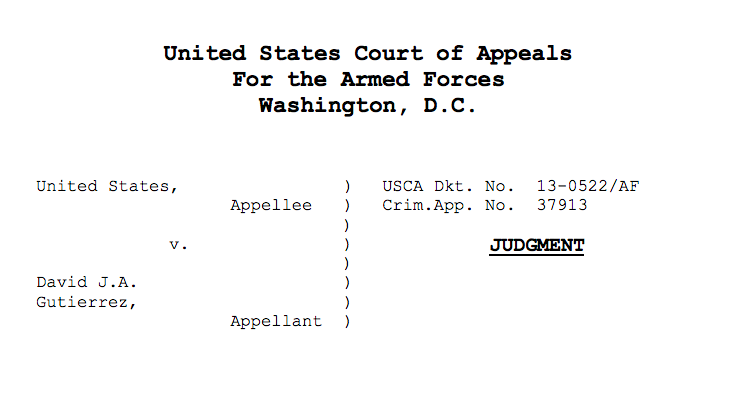 The US Court of Appeals for the Armed Forces (CAAF) has reversed the 2011 aggravated assault conviction (upheld by the US Air Force Court of Criminal Appeals in 2013) of Airman David Gutierrez for potentially exposing a number of sex partners to HIV at ‘swinger parties’, severly limiting the use of this law for future prosecutions in the US armed forces.

Gutierrez’s court-martial on the aggravated assault charge required prosecutors to prove several elements, including that the sexual activity – the “assault” – was deemed likely to produce death or grievous bodily harm.

The five judge CAAF panel’s unanimous ruling, published on Monday (and available in full below) examined the per-act risk of oral and vaginal sex with and without a condom (although there appears to be no discussion of viral load as a key modifier of these risks).

“The question in this case is not whether HIV, if contracted, is likely to inflict grievous bodily harm,” wrote Chief Judge James E. Baker. “The critical question . . . is whether exposure to the risk of HIV transmission is ‘likely’ to produce death or grievous bodily harm.”

In overturning the conviction, the court cited testimony from the prosecution’s medical expert, Dr. Donna Sweet, that in oral sex with or without a condom, the risk of HIV transmission is “almost zero” and HIV transmission through vaginal sex with a condom is only “remotely possible.”

She estimated that an HIV-positive man engaging in condomless vaginal sex with an HIV-negative woman would result in a 1-in-500 risk of the woman acquiring HIV, but deemed this to be at the “high end” of probabilities.

CAAF concluded that the prosecution had failed to prove that any of the acts were likely to transmit HIV.

“In law, as in plain English, an event is not likely to occur when there is a 1-in-500 chance of occurrence,” Baker wrote.

Although the decision – overturning a 25-year precedent that had allowed military personnel to be convicted of aggravated assault based solely on a positive HIV antibody test – was welcomed by advocates, another part of the ruling potentially opens the door to the use of a lesser charge – assault consummated by a battery – for future allegations of HIV non-disclosure.

An article in The Tribune quotes Catherine Hanssens, executive director of the Center for HIV Law and Policy, noting that at least part of the decision was “an important sign of progress” that should be “read and taken seriously” by civilian as well as military courts. But…

In a move called “curious” by Hanssens and “astonishing” by military law blogger Zachary D. Spilman, author of Blog-CAAFlog, the court cited only a Canadian court decision for support of the potentially far-reaching conclusion that lack of knowledge equals lack of true consent.

In fact, the Court cited the notorious Supreme Court of Canada’s 1998 Cuerrier decision (which led to HIV non-disclosure in Canada problematically being framed as a serious sexual assault).

This, notes Spilman, could be extremely problematic in future military cases. His opinion analysis concludes:

I think this an incredibly odd ending to a very interesting opinion. CAAF reaches to foreign law to invalidate the consent of Appellant’s sexual partners, while simultaneously rejecting the notion that it should distort the law to “fit a round peg of conduct into a square hole of a punitive statutory provision.” Ultimately, the court seems to have merely traded one distortion of the law for another.

It remains to be seen what impact this will have on future US civilian or military cases.

In December 2013, the US Senate passed the National Defense Authorization Act (fiscal year 2014) which aimed to reform the military’s HIV-related policies, including prosecutions for HIV non-disclosure, exposure and transmission. Although work is taking place behind the scenes, it’s unclear when this will have an impact on pending or future prosecutions or policy.

In the meantime, Gutierrez is currently serving eight years in military prison. His case has  been sent back to the Judge Advocate General of the Air Force for sentencing review.

The next HIV-related case likely to come before CAAF will be that of Lt Col. Ken Pinkela whose recent change.org campaign to review his unjust court-martial has over 73,000 signatures.

Read the entire CAAF decision below.