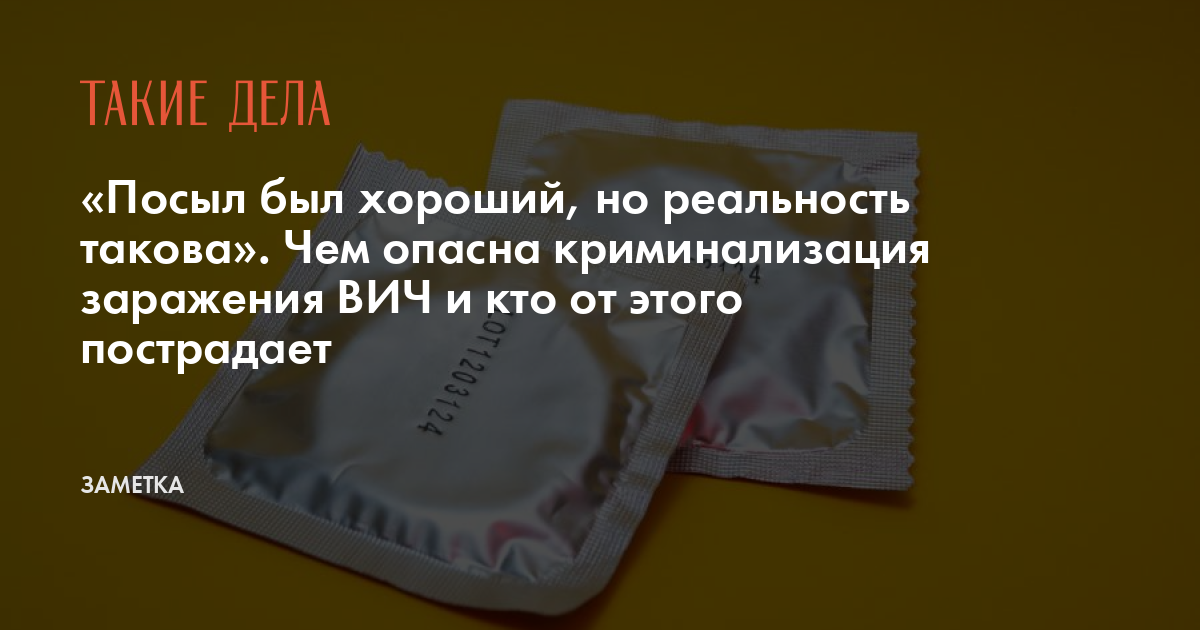 Russian legislation has a section on HIV infection. It criminalises not only the actual infection but also exposure to another person.

Exposure to infection is, for example, when a person with HIV has not informed their partner of their status and the sex was unprotected. And even though the infection did not happen, punishment can still ensue.

“Such Matters” looks into why human rights activists consider this article dangerous and considers those who have actually suffered from someone else’s indifference and negligence?

How does the law work in Russia?

Section 112 on HIV infection was introduced into Russia’s Criminal Code in 1997 as a de facto legacy of the Soviet Union. In 1988, Kalmykia’s Elista saw the first major outbreak of HIV in the USSR when 75 children and four women were infected in a children’s polyclinic due to unsterile equipment.

According to Leonid Solovyov, a lawyer with the Agora human rights organisation, the article is rarely used in Russia. Only 1,069 verdicts have been handed down in more than twenty years of Russia’s Criminal Code article 122, according to the Eurasian Women’s AIDS Network’s monitoring of court statistics.

“The message [of the law] was good: to protect society,” says Natalia Sidorenko, a member of the network’s project Scan of HIV Criminalisation in Eastern Europe and Central Asia. – But the reality is that for all the time the article has existed in today’s Russian Criminal Code, only five sentences have been handed down under Part 4.”

Most of the cases related to Article 122 of the Russian Criminal Code, according to Natalia, involved non-medical cases of HIV infection, and more than half of the convictions related to the crime of “exposure to infection: “That is, no harm was actually done to anyone’s health”.

What is the article criticised for?
It doesn’t take treatment into account

When considering cases of risk of infection, it is critical to take into account whether the defendant has taken antiretroviral therapy, says Natalia Sidorenko.

“The Russian investigation does not take into account the scientific evidence that if a person takes ART, they cannot infect anyone sexually,” Natalia points out. – At the same time they can be accused of trying to infect. This is absurd.

The second important aspect to be taken into consideration by investigators when considering charges under Article 122 of the Russian Criminal Code is the presence of intent. All human rights defenders interviewed by TD agree that in order to be charged, a person must not only be aware of their diagnosis, but also want to deliberately infect their partner.

“How do investigations under Article 122 take place now? An HIV+ person is asked if he or she slept without a condom [with a partner], if he or she admits guilt. The person admits everything, because he is afraid of publicity and attention, he gets a criminal record. As a rule, no one works with the intent [of infection],” says Natalia Sidorenko.

Ideally, an investigator, when questioning a potential victim, should find out how many other partners he had in order to check everyone, to rule out injecting as well, explains lawyer Leonid Solovyov. “In general, the investigation should conduct a comprehensive forensic examination to find out how the infection was transmitted. This is really a very complicated process. Investigators usually try to get away with such a big job with such, shall we say crudely, a small outtake”.When allegations of HIV infection are made, says Elena Titina, director of the Vector of Life charitable foundation, it is quite rare that a person deliberately wanted to infect a partner, more often it is ordinary negligence and irresponsibility.

E.V.A. wrote about the case of Vika, a 17-year-old orphanage inmate. The girl did not tell her 31-year-old partner that she was HIV-positive but offered to use a condom during sex. The man refused and after finding out she was HIV positive he took her to court. She was found guilty of knowingly placing her partner at risk of HIV infection and sentenced to two months of restricted freedom.

Elena Titina acted as a public representative at the trial. She explained that Vika did not want to infect her partner and therefore offered to wear a condom, but could not insist on its use due to the man’s entreaties. The public representative added: the girl was afraid of being rejected, she was economically dependent on her partner, yes, she was negligent, but there was no direct intention to infect her partner.

“IF I DON’T TAKE CARE OF MY HEALTH AND PROTECT MYSELF, WHY SHOULD THE OTHER PERSON BE RESPONSIBLE FOR BOTH OF US?”

In 2018, a 16-year-old girl with HIV was convicted in Vologda for biting a police officer, explaining that she posed a “threat of infection”. In the same year, a court in the Republic of Udmurtia added six months in a penal colony for abrasions on a police officer’s arm after a bite.

The bite, according to experts interviewed by TD, is a really controversial point in terms of HIV infection. In particular, Vadim Pokrovsky, head of the AIDS Center, noted that “there is still no evidence that HIV is transmitted by a bite.” He was among those who signed a statement “on the expert consensus on the use of scientific evidence on HIV in the criminal justice system. It said in part that “the likelihood of HIV transmission through biting, where an HIV-positive person’s saliva contains a significant amount of blood, their blood comes into contact with mucous membranes or an open wound and their viral load is not low or undetectable, ranges from impossible to negligible.”

Elena Titina adds that even if a person with HIV has told their partner that they have the disease, they are still in a vulnerable position – Article 122 part 1 leaves room for manipulation. “How does it happen? Yesterday they lived peacefully, today they quarrelled. Very often this is where blackmail and threats come in.”

She insists that it is imperative to make your partner aware of your HIV status, even if there is fear that it might harm the relationship. “Moreover, I always tell everyone that it is better to have two witnesses or take a receipt, or have a written confirmation available: a simple text message. Just in case.”

The article should be repealed
Human rights activists interviewed by the TD have no doubt that there should be accountability for negligence and carelessness that endangers the lives of others. But they do not agree that a separate article should have been created for HIV+ people.

“Our legislation has articles on causing moderate or severe harm to health. People who had the intention to infect another person and infected him, it makes sense to try under these articles. Why segregate HIV and criminalise all HIV-positive people at once? – asked Natalya Sidorenko.

Natalya Sidorenko believes that Article 122 of the Criminal Code should be abolished: “It is necessary not just to abolish the article, but to raise public awareness of HIV and instill skills to take care of sexual and reproductive health. If infection has occurred, it is the task of the court to consider the arguments of the prosecution and the defence and make a fair decision.

The Russian law enforcement system, according to experts, is not interested in examining the nuances of each case in detail, and the existence of Article 122 of the Criminal Code of the Russian Federation only aggravates the stigmatisation of people living with HIV.

“Sign and watch out – don’t infect anyone!”
Lawyer Leonid Solovyov believes that anyone should treat the health of another person responsibly, respect the right of the other to know about the risks and assess them competently. According to the specialist, the problem of HIV lies not only in the criminal sphere. “HIV is a medical and social issue. This is where reforms to combat stigma are needed,” says the expert.

HIV-POSITIVE PEOPLE CAN FACE STIGMA EVEN IN AIDS CENTRES

Irina (name changed at the request of the heroine) was infected with HIV by her partner: “The story is classic: he said that sex is not as vivid with a condom and everything will be OK. I was young, I did not have the strength to resist, so I paid the price. The man knew he had HIV. He told me afterwards himself: “Yes, HIV, what’s the big deal? I have been living with it for over ten years, I do not take pills, I am alive and well. Maybe there is no virus at all, so why bother believing all kinds of doctors?

Irina found out much later that there is an article for HIV infection when she went to register at the AIDS Centre in her home town: “They immediately gave me a paper to sign that our legislation stipulates responsibility for HIV infection. Sign it and watch out – don’t infect anyone!”

“A person feels like a potential criminal walking out of the AIDS Centre. How does this contribute to acceptance of the diagnosis? I don’t think it does. It just generates a lot of fears, an internal stigma,” comments Natalia Sidorenko. – A person hides his diagnosis, he may not come to this centre at all, he may not take any more therapy, thus damaging his health and possibly the health of others.