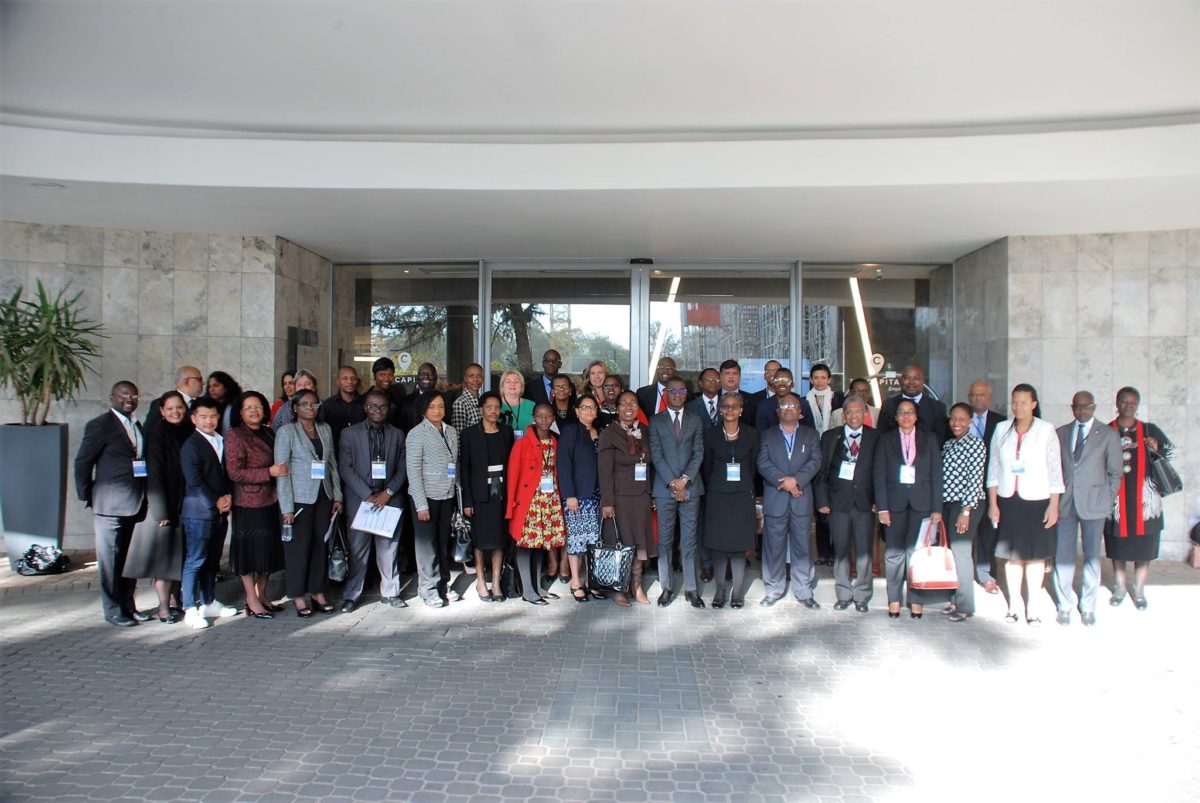 High and Supreme Court judges from across Africa gathered in Johannesburg, South Africa this week for an annual forum to share experiences, compare cases across different jurisdictions, learn about the latest medical and science developments, and discuss ways to advance the use of law as a tool to respond to the HIV epidemic.

The three-day Africa Regional Judges Forum on HIV, Human Rights and the Law was attended by nearly 50 participants, including 30 judges from 16 countries, and was organized by the United Nations Development Programme (UNDP) through the Africa Regional Grant on HIV: Removing Legal Barriers.

The forum was established by a group of judges in 2014 following the release of the report of the Global Commission on HIV and the Law, an independent body convened by UNDP which examined links between legal environments and HIV responses. The annual meetings are owned and planned by the judges themselves.

“Through their interpretation of national Constitutions, legislation, international and regional human rights treaties, the judiciary play a crucial role in establishing and implementing laws, policies and practices that can aid the HIV response,” said Justice Key Dingake who opened the forum with a keynote speech. “This annual forum has proven to be a useful mechanism for facilitating experience and knowledge sharing amongst the legal community, and it is hoped that these efforts will translate into a positive impact on the lives of people affected by HIV, who are often among the most vulnerable in society.”

Discussions during this year’s meeting focused on transgender persons and their lived realities, HIV and tuberculosis in prisons, criminalization of HIV transmission, people who use drugs, and adolescent sexual and reproductive health and rights, including an in-depth discussion on child marriage in Sub-Saharan Africa.

Relevant cases were shared with participants. A landmark judgement in Malawi concerning overly broad criminalization of HIV non-disclosure, exposure and transmission was discussed in detail. The case concerns a woman living with HIV and on antiretroviral treatment who was convicted of a crime under section 192 of the Penal Code for breastfeeding another person’s child. The child did not contract HIV and the evidence indicated that the breastfeeding was accidental and unintended. With the support of the Southern Africa Litigation Centre, UNDP and a team of local lawyers and activists, the conviction was overturned in January 2017 as part of strategic litigation efforts. Key actors involved in the case, including the judge and defense lawyer, attended the session and shared insights of the case with participants.

“One of the key issues in the case was how HIV can be transmitted and the risk of HIV transmission when breastfeeding,” said Justice Zione Ntaba. “I was able to use the information from previous meetings of the Judges Forum as well as material on the database to assist me in determining whether breastfeeding a baby put the baby at significant risk of contracting HIV.”

Another session during the forum focused on tuberculosis in prisons. Katherine Brittin from TB/HIV Care Association discussed how tuberculosis is transmitted in prison and the risk factors for transmission, including overcrowding in prisons. She called on the judges to take these factors into account when sentencing individuals, especially given the overcrowding of prisons in many countries in Africa.

A key aim of the forum is to give opportunities for the judiciary to hear directly from representatives of civil society and affected population groups on the impact of laws, policies and practices. Real world lived experiences were presented by a transgender doctor, a transgender man from Asia-Pacific, a man who acquired TB while in prison, two women who were forced into marriage as children, and a person who uses drugs and is currently on methadone treatment.

In some parts of the region, cultural norms such as child marriage are having harmful effects on the HIV response. Participants from Zimbabwe shared the difficulties that they encountered in mounting a legal challenge for child marriage in the country. In 2016, civil society and the Southern African Development Community-Parliamentary Forum collaborated to develop a Model Law on Eradicating Child Marriage and Protecting Children Already in Marriage which was intended to prompt policy reforms in Member States. While the initiative is still in its infancy, participants expressed hope that it will be a catalyst for change.

“Laws that are based on evidence and human rights have the power to make a positive impact on the HIV response,” said Amitrajit Saha, Senior Advisor HIV and Human Rights, UNDP. “UNDP works to empower and marginalized key populations, including women and girls, in national and local HIV responses can strengthen the response. This also contributes to fulfilling the Sustainable Development Goals pledge to ‘leave no one behind’.”

UNDP has developed an online searchable database of HIV and the law related judgements, which was shared with participants. The database is continually growing in size and has proven to be a useful tool for judges over the last two years that it has been in operation. The database can be accessed online here.

One highlight of this year’s gathering was the creation of a Steering Committee comprised of five judges from the forum. Justice Dingake will serve as the President of the Steering Committee; Judge Zukisa Tshiqi of the Supreme Court of Appeal of South Africa will serve as the Vice President. The other three members of the Steering Committee are Judge Mumcy Dlamini of the High Court of Swaziland, Judge Ndomba Kabeya Elie Leon from the Democratic Republic of the Congo and Judge Anthony Fernando of the Seychelles Court of Appeal. The Steering Committee will set the strategic direction of the forum, initially adopt a draft plan of action for the next six months and work with UNDP and other partners to implement the plan. Preliminary discussions were also held on expanding the forum to cover countries from the Middle East and Eastern Europe regions.

Additionally, the forum dedicated a session to planning for the upcoming Second Africa Regional Dialogue on HIV and the Law scheduled to take place 3-4 August in Johannesburg, and discussed the importance of including judges in this significant event.