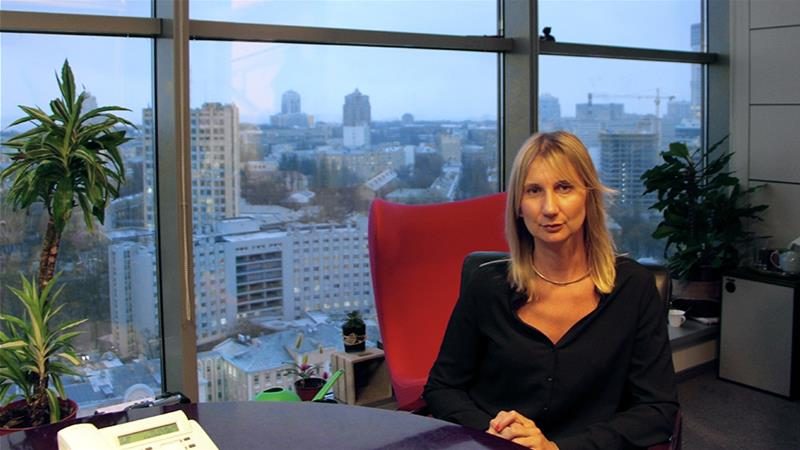 Women with HIV abused by partners, rejected by society

Shunned by relatives, doctors and the community, Ukrainian women struggle to survive and protect their children.

Kiev, Ukraine – In October 2012, 31-year-old Hanna Lilina, a Donetsk-native, was told she had HIV during a pre-natal check-up.

When she found out, she felt confused.

“I started to clean my apartment obsessively as if people could contract HIV just by touching a surface. I didn’t understand it, I was so afraid and paranoid,” she says.

Lilina became infected with HIV after having unprotected sex with her boyfriend, whom she suspects contracted the virus by sharing a needle with friends who injected opium.

He had been an abusive partner, and so by the time she discovered she had the virus, they had already parted ways.

“At first, it was just emotional abuse. Then he started to beat me, especially after he had been drinking. It was always worse then,” she says.

Lilina left her partner to rebuild her life in Kiev.

“Telling my family was difficult. My parents were shocked and upset at first but now they’re very supportive. However, my sister immediately assumed that I was a drug addict. She hates me and wants nothing to do with me.”

In Kiev, she started a new relationship.

But when her new boyfriend found out about the virus, “he started acting differently around me”, she says.

“When I was seven months pregnant, he tried to get me to have an abortion. By the time the baby was born, he had left me.”

Ukraine has one of the fastest growing HIV epidemics in Eastern Europe and Central Asia, with approximately 240,000 people living with the virus and a prevalence of 0.9 percent in the general adult population.

In Ukraine, 35 percent of women living with HIV have experienced violence from a partner or husband since the age of 15, compared to 19 percent of women who do not have HIV, according to a November 2016 survey by Positive Women, a Ukrainian NGO.

Approximately half of the 1,000 HIV-positive women surveyed across the country had no support after they suffered violence.

“There is an epidemic of gender-based violence in many regions of the world, disproportionately affecting women and girls, making them more vulnerable to becoming infected with HIV,” Vinay P. Saldanha, UNAIDS regional director for Eastern Europe and Central Asia, tells Al Jazeera.

‘A culture of blame’

According to UN Women, women living with HIV are more likely to experience violence, including violations of their sexual and reproductive rights.

“Involuntary and coerced sterilisation and forced abortion among women living with HIV has been reported in at least 14 countries worldwide,” UN Women reports.

“The relationship between violence and HIV is complicated, but a significant factor is the culture of blame that surrounds HIV.

“In Eastern Europe and Central Asia, as in many other regions, the blame for HIV tends to fall on women,” says Saldanha.

Women are also often the first in a couple to learn of HIV in the family as the coverage of HIV testing and treatment in Ukraine is higher among women.

Most women are tested for HIV at least once at gynaecology and obstetrics clinics.

“It can tragically unfold that her husband or sexual partner points the finger of blame at her, even if her male partner was the one to infect her with HIV.

“In such a situation, she is at potential risk of domestic and sexual violence.”

The consequences can be life-threatening.

“As a result, a woman’s de-facto response can be to refrain from telling her family or partner that she has HIV, and she might even be too afraid to seek out the life-saving health services available,” says Saldanha.

And even if a woman does want treatment, it is not always guaranteed.

In some cases, women are unable to access medical support because their partners refuse to pay for travel to the hospital.

“‘You can get treatment, just not with my money,’ is what they say. But when a woman is financially dependent, what can she do?,” says Sofia, an HIV-positive officer working for the All-Ukrainian Network of People Living with HIV/AIDS, the country’s largest patient organisation.

The situation became so precarious that in May 2017, the Positive Women NGO filed a joint report to the United Nations on the violations of women’s rights, along with other civil society organisations representing drug-users, sex workers and members of the LGBT community.

“In small towns and the provinces, the situation is particularly difficult. It can be impossible for an HIV-positive woman to find a gynaecologist who will voluntarily examine or simply look at her,” says a member of Positive Women, who wished to remain anonymous.

“It’s only on the orders of high authorities that doctors will agree to an examination. And these are cases involving ‘safe’ women.”

If a woman is considered “unsafe” – an alcoholic, drug-user or sex worker – she cannot even enter a doctor’s office.

A community’s attitude to HIV can be so unsupportive that patients are often harassed or forced out.

“Doctor’s attitudes are not much better,” says the Positive Women member.

The group’s report to the UN detailed the case of Vera, a sex worker from the Kirovograd region who underwent a caesarean section to deliver her baby.

After the procedure, the 24-year-old was told that she had been sterilised because, in the words of her doctor, she had “no right to build a family and have children”.

“Over a year and a half later, Vera is still coming to terms with what happened to her,” said the Positive Women member.

Mothers are also challenged with having to protect their children from discrimination.

“If, for example, a school director finds out that a student has HIV, the child could be kicked out.

“This leaves some women in extremely poor financial situations, unable to work because they must look after their child. Women prefer to just to pay for a clean medical record to avoid such problems – you can do that in Ukraine,” she says.

Lilina, the HIV patient and domestic abuse survivor, says her daughter’s paediatrician tried to inform her school of the child’s HIV status.

With the help of ANTIAIDS, she managed to block the doctor’s attempt.

“[He] was certainly not happy when he finally agreed to keep my status confidential,” says Lilina.

But the Ukrainian government is taking this situation “very seriously”, says UNAIDS’ Saldanha.

In 2017, the National Coordination Council on preventing HIV/AIDS in Ukraine (NCC) accepted two representatives from Positive Women to help create an HIV/AIDS strategy over the next five years.

ANTIAIDS’ Rudneva says there is more to be done, however.

“If you have HIV, you deserve HIV. That’s the mentality in this country,” she says.

The foundation gave Lilina the support to start rebuilding her life in Kiev, helping her helping her find accommodation and providing her baby with a supply of nappies.

It also encouraged her to join Kyyanka, a support group.

At first, Lilina was sceptical and it took her a while to go to a meeting.

“But now the women are like my family,” she says. “It wasn’t until I joined Kyyanka that I understood how I’d been struggling with self-stigma and repressing negative feelings about myself.

“The self-stigma is still there, but at least I’m aware of it now. It’s only when you’re aware of the stigma, that you can start to fight against it.”