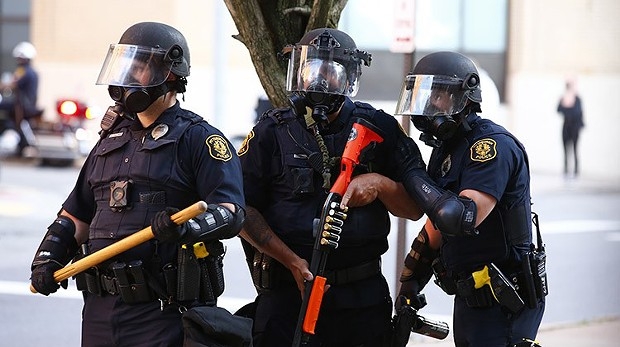 A central Pennsylvania lawmaker’s bill to potentially give prison time to anyone who intentionally spits on a cop is on its way to the state Senate.

Under existing law, spitting on a police officer is treated the same as spitting on any other person. The perpetrator could be charged with disorderly conduct, Schmitt told the Capital-Star.That currently could be charged as either a summary offense or a third degree misdemeanor, with penalties ranging from a fine of $25 to $1,000, and up to a year in prison.

Schmitt’s bill would bump up spitting, or knowingly throwing any other bodily substances, such as blood, urine, or feces, on a police officer to a first degree misdemeanor. That’s punishable with two-and-a-half to five years in prison, and a fine of up to $10,000.

Spitting, argued Schmitt — an attorney by trade — “is done in an effort to antagonize and perhaps provoke a response from the officer.”

“It’s so disrespectful and dehumanizing to do this, to bait the office into striking back,” he added.The Pennsylvania state chapter of the American Civil Liberties Union opposed the legislation, arguing the bill “needlessly expand[ed] the crimes code.”

The bill “would add yet another offense for police to selectively enforce and for prosecutors to wield when charging a defendant,” the ACLU added.

Since 2010, the number of crimes that citizens can be charged with has more than doubled, from 636 to more than 1,500, according to the group.

During the House’s floor debate, lawmakers brought up an additional issue. As written, the bill elevated the misdemeanor to a felony if the spitter had a communicable disease. The bill also specifically notes Hepatitis-B and HIV-AIDS.

Right now, the only specific statute covering spitting applies if the offender is a prisoner. In that case, spitting on anyone else, including a police officer or corrections officer, is automatically a felony if the prisoner is “infected by a communicable disease, including, but not limited to, [HIV] or hepatitis B.”

The language was written in the 1990s, Schmitt said. When he wrote his law adding police as a protected class, that language carried.

However, according to the federal government, saliva cannot spread the disease.

Rep. Brian Sims (D-Philadelphia) and one of the chamber’s two openly gay lawmakers, said the proposal is “bad medicine, it is bad science, and it is certainly bad policing.”

Democratic efforts to amend out HIV and Hepatitis out of the bill failed in floor votes. But Sims later tweeted that he personally called the state Fraternal Order of Police to get their support to axe the language. The influential police union confirmed it approved of the edit, and Schmitt has also agreed to the change.

Schmitt told the Capital-Star that he was only made aware of the language’s issues right before the final vote, and was convinced that removing it would improve his bill and all existing state law.

“Those statues probably need to be updated as well,” Schmitt told the Capital-Star. “It’s antiquated [and] I agree it stigmatizes.”

The bill now heads to the Senate. Schmitt called for the upper chamber to strip out the HIV language. He thought Gov. Tom Wolf might even veto his proposal if it wasn’t addressed.

Schmitt added he was interested in having a conversation about adopting stiffer penalties for all people who spit on others, regardless of their job.