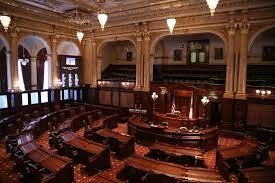 SPRINGFIELD — Gov. J.B. Pritzker signed a bill into law Tuesday that repeals criminal penalties for people who transmit HIV to others.

House Bill 1063, sponsored by Rep. Carol Ammons, an Urbana Democrat, and Sen. Robert Peters, a Chicago Democrat, deletes language adopted in Illinois and many other states during the early days of the HIV epidemic that made it a felony for an individual to engage in certain activities such as unprotected sex, donating blood or tissue or sharing nonsterile intravenous needles knowing that he or she was infected with HIV.

“Research has shown these laws … don’t decrease infection rates, but they do increase stigma,” Pritzker said. “It’s high time that we treat HIV as we do other treatable transmissible diseases, thereby treating our residents with dignity and furthering our mission to end this epidemic in Illinois.”

At a bill signing ceremony in Chicago, Pritzker said the legislation is one more step his administration is taking to ensure equal rights for members of the LGBTQ community.

Other steps have included providing financial aid to transgender students who otherwise would not qualify for federal aid, requiring curriculum in public schools that includes contributions of the LGBTQ community, and expanding Medicaid to cover gender-affirming surgery.

Pritzker was joined at the ceremony by Lt. Gov. Juliana Stratton, Democratic leaders in the General Assembly who helped pass the bill, the AIDS Foundation of Chicago and other LGBTQ rights activists.

Peters noted that the law in Illinois did not require that a person actually transmit HIV to be convicted of the crime, only that they engaged in activity that could have exposed another person to the virus.

“Too often, when faced with a challenge in society, we seek the hammer of criminalization,” Peters said. “When we faced the challenge of HIV, our country reacted out of fear, prejudice and hate, and with that brought down a violent and horrendous hammer. In turn, this caused more fear, pain and trauma for people living with HIV. It did nothing to bring safety or treatment or public health to our world.”

The bill decriminalizing HIV was one of four bills Pritzker signed Tuesday that were supported by advocates for LGBTQ rights.

That bill was sponsored by Rep. Margaret Croke, a Chicago Democrat and Sen. Laura Fine, a Glenview Democrat.

“For decades, our state insurance law discriminated against countless Illinoisans looking to welcome a child into their family, putting parenthood financially out of reach for same-sex couples, single women and others,” Croke said in a statement. “Setting things right and creating a more inclusive insurance law was long overdue.”

The Illinois Senate on Tuesday passed a measure decriminalizing the transmission of HIV.

The measure has already passed the House and will need only a signature from Gov. J.B. Pritzker to become law.

House Bill 1063 would eliminate existing criminal statutes that penalize HIV transmission as a Class 2 felony. If Pritzker signs the bill, Illinois would join 11 other states that do not have laws criminalizing the transmission of HIV, including Arizona, New Mexico and Texas.

HB 1063 also would repeal existing laws allowing law enforcement or state’s attorneys to access a person’s HIV status. Under current criminal law, a person who transmits HIV to another person can be charged with “criminal transmission of HIV.”

Current law prohibits the forced disclosure of a person’s HIV status but provides exceptions for law enforcement officials or state’s attorneys to subpoena or petition for the HIV status of criminal defendants.

The Illinois HIV Action Alliance, which lobbied for the bill, praised its passage.

“The truth is HIV criminalization never improved safety or public health in Illinois — in instead, it has only caused suffering to people living with HIV, their families, and their communities. It has promoted stigma and discrimination, and it has discouraged testing, treatment, and disclosure for decades,” the group wrote in a written statement Tuesday.

Sen. Robert Peters, a Chicago Democrat, sponsored the bill in the Senate, and Rep. Carol Ammons, an Urbana Democrat, was lead sponsor in the House.

Legislation that would overhaul sex education in Illinois and a measure to decriminalize the transmission of HIV were among several bills that passed the Senate Executive Committee Wednesday.

The Executive Committee advanced an amendment to House Bill 1063, filed by Rep. Carol Ammons, an Urbana Democrat, and sponsored in the Senate by Sen. Robert Peters, a Chicago Democrat. It passed through the committee in an 11-4 vote to advance to the Senate floor.

Current Illinois law allows for individuals to be charged with “criminal transmission of HIV,” while also allowing for law enforcement to compel criminal defendants to test for HIV/AIDS in order to determine whether to charge them for the crime.

“Those living with HIV deserve to be able to receive treatment for their condition, and not risk arrest or incarceration,” Peters said in a release Wednesday. “It’s time we end the stigma surrounding sexually transmitted diseases and start treating them like the medical conditions that they are.”

The bill would eliminate the charge from Illinois statute, and would amend the AIDS Confidentiality Act — a statute that protects Illinoisans from having an HIV-positive status disclosed — to remove exemptions for law enforcement from the provision.

Lawmakers in the House voted 90-9 last month to pass the legislation. It now needs only majority support in the Senate to be sent to Gov. J.B. Pritzker for his signature.

Other legislation advanced by the committee Wednesday includes a provision that allows teachers unions to collectively refuse to go to work due to abnormally dangerous health and safety conditions, such as the COVID-19 pandemic, and another extending by three years the length lottery funds will go toward Alzheimer’s disease care.

The Illinois House Judiciary Criminal Committee advanced two bills Tuesday with unanimous support, one to decriminalize transmission of HIV and another to expand protections for survivors of sexual assault.

An amendment to House Bill 1063, introduced by Democratic state Rep. Carol Ammons, of Urbana, changes several Illinois statutes related to persons living with HIV/AIDS and its transmission. On Wednesday, the House approved the bill 90-9, sending it to the Senate for consideration.

Under current Illinois law, a person who transmits HIV to another person can be charged with “criminal transmission of HIV.”

The AIDS Confidentiality Act, meant to protect Illinoisans from having an HIV-positive status disclosed or used against them, contains exceptions allowing law enforcement officials to subpoena or petition for the HIV status of criminal defendants in order to determine whether they should be charged for potential criminal transmission.

“We would not put a law on the books today that will criminalize COVID for people who refuse to test, and people who know they’re spreading COVID but refused to test and refuse to wear a mask, we would not then criminalize people for knowingly passing COVID,” Ammons told the committee.

Her legislation would repeal existing laws allowing law enforcement or state’s attorneys to access the HIV status of an individual and would remove criminal statutes for the transmission of HIV completely.

“This is why we’re trying to change this law is because this is the only (sexually transmitted infection) that we have on the books that literally criminalizes certain communities and is specifically targeted,” Ammons said.

Witnesses testifying in support of the bill told the committee that the criminal statute has been used in 22 cases since 2012, and fewer than 10 times since 2017.

“HIV and our knowledge about prevention and transmission has dramatically changed in the last 30 to 40 years,” Tom Hughes, executive director of the Illinois Public Health Association said in his testimony. “The (U.S. Centers for Disease Control and Prevention) recognizes that a person who is HIV positive, but who takes medication regularly stays virally suppressed, is undetectable on their viral load, and is effectively no risk for the transmission of HIV.”

According to Hughes, the criminalization of HIV status poses a significant obstacle to public health by incentivizing people to not get tested or disclose their status to their partner out of fear of criminalization.

Under questioning from committee member Rep. Deanne Mazzochi, R-Elmhurst, Hughes said that during his time working for the Illinois Department of Public Health, most cases involving the criminal transmission of HIV “revolved around communities of color” and had a disproportionately negative impact on those groups.

Mazzochi noted that after insulin, HIV medication was “one of our largest spends in the state of Illinois.” She indicated that she would support the measure as long as studies showed it would reduce HIV transmissions rather than increase rates once it became decriminalized.

Ultimately, Mazzochi and other Republicans on the committee joined the Democratic majority to send the legislation to the House floor in a 17-0 vote.

House Bill 1732, introduced by Rep. Maura Hirschauer, D-Batavia, expands protections for sexual assault survivors by amending the Civil No Contact Order Act. That law allows for “victims of non-consensual sexual conduct or penetration” to a receive a court order protecting that person, their family, household or someone providing them services from having contact with the perpetrator of the crime.

HB 1732 already passed the committee unanimously last month, but Hirschauer brought it back with an amendment. The version that passed previously allowed for family or household members of the victim to file the petition on their behalf.

Hirschauer’s amendment to her bill, which she presented to the committee Tuesday, requires a statement verifying that the victim consented to the petition for it to be filed this way. It also advanced to the House floor in a unanimous 17-0 vote.

Senate Bill 2277, which appeared before the Illinois Senate Criminal Law Committee on Tuesday, would also make civil no contact orders filed against those convicted of criminal sexual assault permanent instead of lasting 2 years. That measure was also passed committee unanimously.