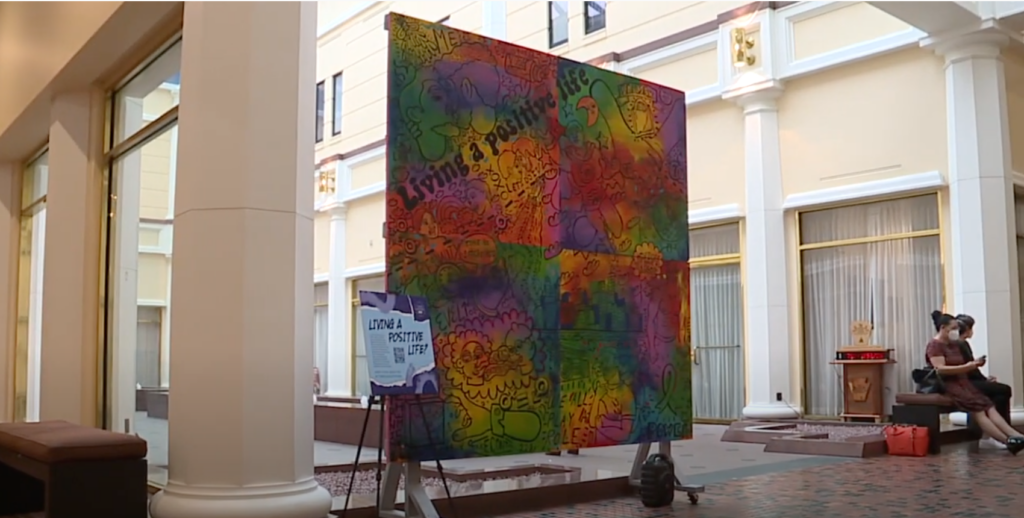 ‘HIV is not a crime but there are outdated laws that make it a crime in Pennsylvania. We cannot have people losing lives and livelihoods because of this,’ Rep. Malcolm Kenyatta said.

About 20 people gathered Wednesday in the East Wing of the State Capitol to unveil the “Living a Positive Life” mural commissioned by the Family Health Council as part of its Take Control of HIV campaign.

“We are here today to broadcast loud and clear that HIV is no longer a death sentence,” Patricia Fonzi, the CEO of the Family Health Council of Central Pennsylvania said.

The mural is full of colorful graphics and messaging regarding the importance of open communication about HIV. On display at the capitol for the month of October, the goal of the mural is to empowers individuals to thrive no matter their HIV status.

The mural was created by well-known Harrisburg-based artist Stephen Michael Haas, a multi-disciplined artist inspired by the likes of late 90s cartoons and Super Mario’s squirrels.

“Whether infected long-term or a more recently, there is hope like never before,” Fonzi told the Capital-Star. Current medications can control HIV to the point where the virus is ‘undetectable’ on a lab test.

Furthering the push by HIV service organizations is the scientifically researched concept of Undetectable = Untransmittable or U=U for shorthand. More than 750 organizations worldwide, according to aidsmap.com, and including the U.S. National Institutes of Health, the Centers of Disease Control, and the World Health Organization “agree that people with HIV whose viral load is stably suppressed cannot sexually transmit the virus.”

In non-professional terms, U=U means “if a person with HIV is on HIV meds (antiretroviral therapy, or ART) with a consistently undetectable HIV viral load, the virus cannot be transmitted to a sex partner,” according to the US Dept. of Veteran’s Affairs.

Although not coordinated with the mural’s unveiling, transmitting HIV to a sexual partner formed the basis of a hearing held the same morning before the House Democratic Policy Committee under the direction of Philadelphia Democratic Reps. Mary Isaacson and Rep. Malcolm Kenyatta.

“Pennsylvania has laws on the books that criminalize or control behaviors through HIV-specific statues and regulations.” Kenyatta said in a statement.“HIV is not a crime but there are outdated laws that make it a crime in Pennsylvania. We cannot have people losing lives and livelihoods because of this.”

The policy committee heard from Cumberland County resident Julie Graham, who described the impact of these laws on her life after she was charged with four crimes, including two felonies, based on allegations by a man she had dated who claimed she didn’t disclose her HIV status. Due to these allegations, she faced personal and professional consequences that forever impacted the trajectory of her life.

“I support and applaud your courage and advocacy to testify here today,” Rep. Isaacson expressed to Graham. “Being HIV positive is not a crime and we must do better in supporting those in Pennsylvania who are living with HIV.”

House Democratic Policy Committee Chairman Rep. Ryan Bizzarro, D-Erie, was also in attendance adding, “HIV decriminalization is important to the entire Democratic Caucus and I am grateful to the testifiers who came today to speak on this important topic.”

Other testifiers during the hearing include Adrian Shanker, executive director, Bradbury-Sullivan LGBT Community Center, Steven Bryson, SERO Legal Fellow, AIDS Law Project of Pennsylvania, and Michelle Troxell, Pennsylvania Co-Chair, Positive Women’s Network USA. They each shared data that show the impact of these laws on the lives of Pennsylvanians and support changes to the laws.

Michelle Troxell, representing the Positive Women’s Network and a nurse, told the committee she has lived with HIV for 32 years. Her testimony noted that “while I have seen many advances in the way we medically treat people living with HIV, I have barely seen any advances in the way we treat people living with HIV.” See meant the laws that govern how HIV is handled within the legal system.

Also testifying was Steven R. Bryson, a Sero Project Fellow and staff attorney with the AIDS Law Project of PA. He explained what is confusing to many people about the state’s HIV laws.

“Pennsylvania does not have HIV-specific criminal laws mandating disclosure of one’s HIV positive status prior to engaging in sexual contact. Nor does it specifically outlaw the perceived, potential or actual HIV exposure or transmission,” Bryson’s submitted testimony noted. Instead, his testimony clarifies, “Pennsylvania uses generally applicable criminal laws to prosecute people with HIV even when the act in question has little or no risk of transmitting HIV.”

The hearing was closed with comments from Rep. Kenyatta who said: “Here in Pennsylvania, we can and should do better than this. So many other states have updated their laws and we must work to get these laws off our books.”

Testimony is available at www.pahouse.com/policy.

The mural is full of colorful graphics and messaging regarding the importance of open communication about HIV. On display at the capitol for the month of October, the goal of the mural is to empowers individuals to thrive no matter their HIV status. The mural was created by well-known Harrisburg-based artist Stephen Michael Haas, a multi-disciplined artist inspired by the likes of late 90s cartoons and Super Mario’s squirrels.