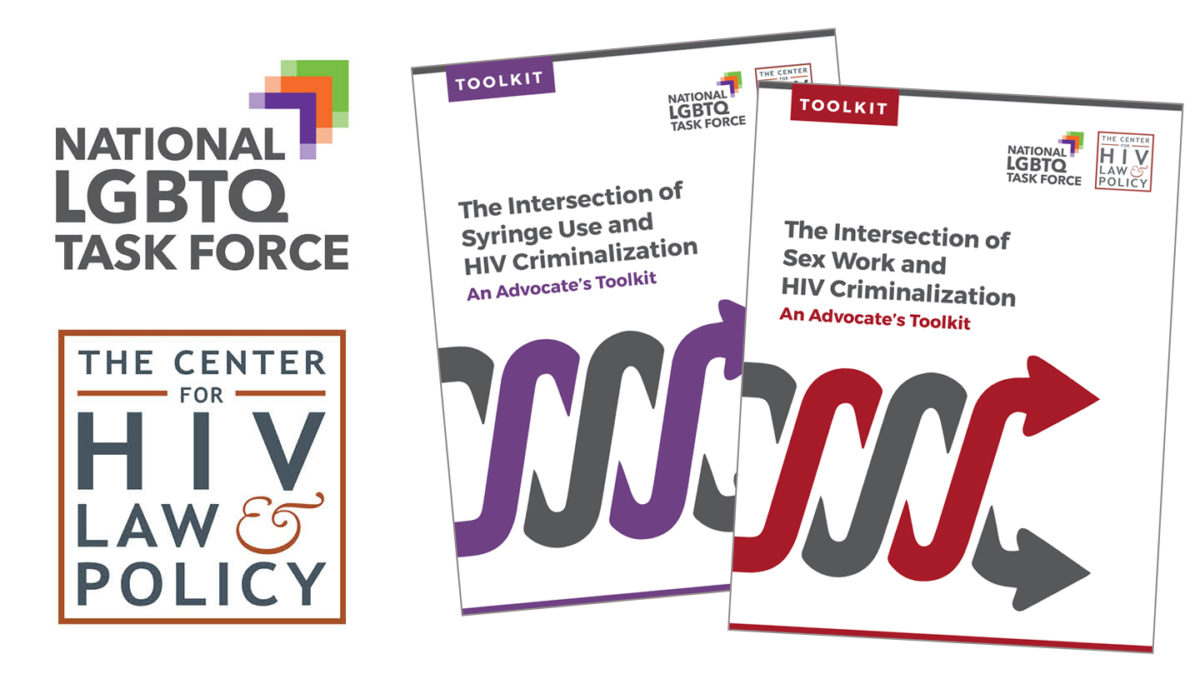 On September 7-10, CHLP staff attorney Kate Boulton attended the U.S. Conference on AIDS in Washington, DC, where she facilitated two workshops. The first focused on addressing the overrepresentation of people living with HIV and Hepatitis C in the criminal legal system and to examine its causes, including discrimination and systemic racism, poverty, and the war on drugs. Presenters from the National Viral Hepatitis Roundtable, Reframe Health and Justice, the Louisiana Coalition on Criminalization and Health, and Lambda Legal addressed the inadequacy of prevention, care, and treatment in correctional settings for PLHIV and HCV.
The second workshop focused on the intersections between HIV criminalization and the criminalization of sex work and drug use with presenters from NMAC, Reframe Health and Justice, and the National LGBTQ Task Force. The session featured the release of a new set of advocacy toolkits developed jointly by CHLP and the Task Force to lay out the connections and promote more intersectional advocacy between HIV criminal law reform, decriminalization of sex work, and syringe access.

On August 17, CHLP and Prevention Access Campaign/Undetectable=Untransmittable (“U=U”) partnered  to present a webinar on the recently launched Consensus Statement on HIV “Treatment as Prevention” in Criminal Law Reform.

Bruce Richman, Executive Director of the Prevention Access Campaign, provided an overview of U=U and the importance of the Consensus Statement as a tool to help understand U=U’s relevance to the criminal law context. Kate Boulton, staff attorney at CHLP, provided guidance on how advocates can use the Consensus Statement in their efforts to modernize HIV criminal laws.

The Consensus Statement has more than 70 endorsements to date. To review and endorse the statement, visit www.hivtaspcrimlaw.org. The website also provides information on the 10 originating endorsers, an FAQ, and links to a variety of other resources.

CHLP launches Sourcebook on HIV Criminalization in the United States

On August 30, CHLP released a new publication that catalogues and analyzes state and federal HIV criminal laws in the United States and U.S. territories. HIV Criminalization in the United States: A Sourcebook on State and Federal HIV Criminal Law and Practice includes examples of recent prosecutions and explanations of the major cases applying these laws, along with text and analysis of state laws on other sexually transmitted diseases that involve criminal penalties or other restrictions for exposing another person to possible disease.

The Sourcebook is part of CHLP’s campaign to support state advocates through tools that expand legal literacy on HIV criminalization. In addition to the Sourcebook, CHLP’s website includes a separate page for each state summarizing relevant HIV and STI criminal law sections, so that users can download everything they need exclusively for their state.

CHLP will co-host a webinar on October 11 to review ways of using the Sourcebook in HIV criminal reform efforts. The webinar will explore some strategic pathways to reform, along with their benefits and drawbacks. The discussion will cover key factors and questions to consider in deciding which reform strategy makes the most sense in a given jurisdiction. For more information, email Kate Boulton at kboulton@hivlawandpolicy.org.

CHLP Partners with Until There’s a Cure

CHLP worked with interns at Until There’s A Cure to create outreach tools for nine states in which PJP is involved in HIV modernization efforts. These tools include a detailed guide on relevant state legislators and voting records, as well as organizational allies and stakeholders, and supports the work of state advocates involved in outreach to legislators and efforts to broaden the membership of their coalitions.

California’s bill to modernize the state’s HIV criminal law has been approved by both the California Senate and Assembly and has been sent to Governor Jerry Brown for signature. The Governor has until October 15 to sign or veto the bill.

If your organization is interested in supporting modernization of California’s HIV criminal laws, we invite you to join Californians for HIV Criminalization Reform (eqca.org/chcr). Please contact brad@eqca.org or 323-848-9801 for additional information.

On August 30, the Georgia Coalition to End HIV Criminalization held a sold-out community discussion and reception in partnership with In the Life Atlanta. The event included a panel discussion and community dialogue about how HIV criminal laws impact the lives Georgians. The event also showcased the work of artists living with HIV, pieces collected by the coalition’s Georgia Postcard Project.

Coalition members are working on an information packet for the committee created by House Resolution 240, which is tasked with “[a]ssess[ing] the HIV laws’ alignment with current evidence regarding HIV transmission risk and consider whether these laws are the best vehicle to achieve their intended purpose.” The packet will include a letter from the coalition, the coalition’s updated policy brief on HIV criminalization, and other resources.

The coalition convened in August and September and is planning an in-person strategic retreat on October 31. For more information on the retreat and how to attend, contact Emily Brown at emily@georgiaequality.org.

If you are interested in joining the Georgia Coalition to End HIV Criminalization, please contact Emily Brown (emily@georgiaequality.org) and visit the coalition’s website for additional information.

If you are interested in information about HIV criminalization or participating, supporting or endorsing HMM-Indiana, visit the get involved page or contact Carrie Foote at foote@iupui.edu.

The Louisiana Coalition on Criminalization and Health (LCCH) engaged in discussions with the Louisiana Department of Health on priorities for a modernized law, including the requirement for intent to harm, a misdemeanor rather than a felony penalty, incorporation of modern scientific knowledge, and the removal of the sex offender registration requirement.

The Coalition convened in August and September, and members have been reaching out to legislators to build support and identify potential allies for their advocacy efforts.

If you are interested in information about HIV criminalization or actively participating in LCCH, please contact Chip Eakins at ceakins@philadelphiacenter.org.

On August 3 and 4, the Missouri HIV Justice Coalition held a “Train the Trainer” event in Columbus with 20 attendees from around the state, many new to the cause of HIV criminalization. The first day included sessions from CHLP and Sero on HIV criminalization, the current law in Missouri, and legal reform advocacy. The second day brought in outside facilitators to discuss advocacy strategies with different communities and stakeholders.

Coalition members convened at the end of August and are creating a work plan for community education and coalition building.

On September 17, a letter to the editor, written by coalition members Drs. Barbara Grisphover and Alan Taege, was published in response to a newspaper editorial expressing support for the state’s HIV felonious assault law in light of Orlando Batista’s case.Advocates are awaiting a ruling from the Ohio Supreme Court in Batista, expected before the end of September (more information below in Cases).

Ohio advocates also convened in August and September, and focused on developing a strategic response to the Criminal Justice Recodification Committee’s final recommendations to the state legislature.

Meetings are the second Wednesday of every month at 5:00pm (ET).

The PJP Tennessee Working Group members continue to travel around state and engage in community education and advocacy. Tennessee advocates convened in August and September, and are updating and solidifying their talking points in order to complete a rapid response plan. Coalition members plan to meet with legislators and update their legislative strategy over the next few months.

If you would like information on HIV criminalization or are interested in becoming an advocate with the PJP TN Working Group, please contact Arpita Appannagari at aappannagari@hivlawandpolicy.org.

If you are interested in information about HIV criminalization or actively participating in the Texas HIV Working Group, please contact Arpita Appannagari at aappannagari@hivlawandpolicy.org.

On September 21, 2017, Michael Johnson bypassed a new trial and entered a no-contest plea in the St. Charles County Circuit Court in Missouri. In exchange, he accepted a sentence of 10 years in state prison. Because Missouri’s HIV criminal law hinges liability on whether a defendant can prove he disclosed his HIV status prior to sex—a virtual impossibility in most instances—Johnson decided to accept a plea deal that credits him with time served since his arrest nearly four years ago. Under Missouri’s law, one of the harshest in the country, Johnson could have faced a sentence of anywhere between 66 years and life in prison if found guilty. He previously had been sentenced to 30 years in prison before the appeals court threw out the original conviction.

Orlando Batista was indicted for felonious assault in July 2014 for allegedly engaging in sexual conduct with his girlfriend without first disclosing his HIV status. After the trial court rejected his motion to dismiss, Batista pleaded no contest and the court sentenced him to the maximum term of eight years. CHLP, with support from the Gibbons P.C. law firm and the Ohio Public Defender, along with seven Ohio-based and national organizations, submitted a friend-of-the-court brief in support of Batista to the Supreme Court of Ohio. The ACLU of Ohio Foundation and Center for Constitutional Rights submitted a separate friend-of-the-court brief based on First Amendment grounds. On May 17, the Supreme Court of Ohio heard oral arguments in the case. No ruling has been issued to date, although one is expected, as noted above, shortly.

The United States District Court for the Eastern District of North Carolina handles nearly all cases under the federal Adam Walsh Act, which allows the U.S. Attorney’s Office, upon certification from the Federal Bureau of Prisons, to petition the court to indefinitely civilly commitment a prisoner close to the end of their criminal sentence. The government must prove that the prisoner suffers from a mental abnormality that renders the prisoner sexually dangerous beyond their control. CHLP is authoring a brief in support of the defendant, arguing that HIV should not be a factor in this assessment.