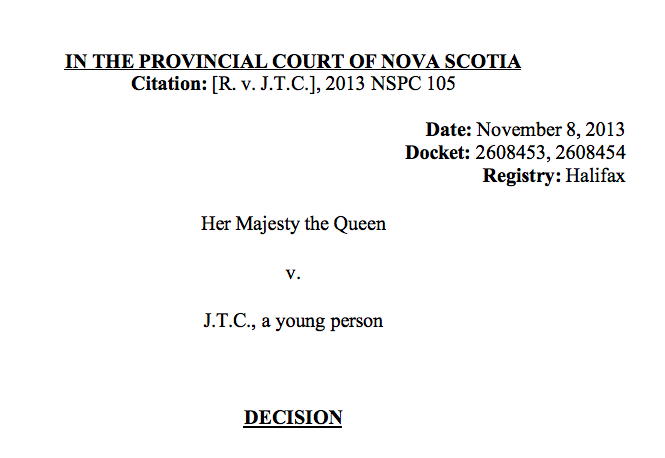 On November 8 2013, the Provincial Court of Nova Scotia in Canada released a very encouraging decision in a case of HIV non-disclosure. A young man with an undetectable viral load who had not disclosed his HIV positive status to his sexual partner before engaging in unprotected sex was acquitted of aggravated sexual assault.

The couple had engaged in vaginal sex on three occasions. Twice, they used a condom. On the third occasion, however, it was found that they had unprotected vaginal sex without ejaculation. At no time, did the young man disclose his HIV status. In fact, the judge found that he had actively concealed that he was HIV positive to his sexual partner who had inquired about rumours that he had AIDS.

None the less, the Provincial Court of Nova Scotia acquitted the young man, despite the factual finding that he had engaged in unprotected sex. The Court described two different routes to its conclusion.

The first route relates to the analysis of the consent given by the complainant. In Canada, one element that the prosecution must prove in a non-disclosure prosecution is that the complainant would not have consented to sex if he or she had known about his or her partner HIV positive status. At trial, the complainant testified that had she known that the accused was HIV positive she would not have had unprotected sex with him. But she also said that had she known that his risk of transmitting HIV was virtually non-existent, she would have consented.

As described by Justice Campbell, that the risk of transmission was infinitesimally small was the “true state of affairs” based on the evidence before the Court. Indeed, the unchallenged medical expert called by the defence testified that he did not believe that there was any risk of transmission in this case. He further concluded that “in an act of sexual intercourse someone with an undetectable viral load such as [the accused] had a one in one million chance of transmitting the virus. That might be as high as one in 500 000 (…)” and described the risk as “very close to zero.”

According to the Court, the complainant’s statement that had she known the extremely low degree of risk she would have consented to unprotected sex with the accused is part of the context that needs to be taken into account when determining whether the consent was vitiated or not. As summarised by Justice Campbell:

The Provincial Court of Nova Scotia, however, did not accept that the Supreme Court of Canada or the Ontario Court of Appeal decisions had definitely closed the doors to different findings with respect to whether “a realistic possibility of HIV transmission” existed based on the medical evidence before the judge in a particular case.  Concerned about the potential for discrimination against people living with HIV in the absence of any risk, the Provincial Court of Nova Scotia stated that the Supreme Court decisions “can and should be interpreted in a way that in not incompatible with an approach that respects both the scientific evidence in each case and the fact finding role of trial courts.”  According to the Court, “[t]he Supreme Court did not intend (…) to impose evidentiary findings on trial courts that are incompatible with the evidence actually before those courts.”

In the case at bar, the medical evidence called by the defence was clear: the risk of transmission was approaching zero. The Court was careful to specify the risk determination was a finding of fact (versus a finding of law), specific to the case, and ruled that the legal conclusion arising from that fact was that, even in the absence of a condom, the legal test of a “realistic possibility of transmission” was not met.

This decision is an encouraging development in the law on HIV non-disclosure in Canada. While trial court decisions have limited precedential authority in the Canadian legal system, this decision remains important as it demonstrates that Mabior and D.C — which have been strongly criticised for being at odds with the science and previous case law — need not prevent science from prevailing over prejudice. Medical evidence can and should play a critical role in cases of HIV non-disclosure, exposure and transmission, something both defence lawyers and medical experts in HIV will need to be very mindful of.

Mainstream media news reports can be found here and here.  The full judgement is below.

Watch all the videos of Beyond Blame @HIV2020 - our "perfectly executed...deftly curated, deeply informative" webshow

How is the Expert Consensus Statement bringing science to justice?

US: To end the HIV epidemic in Nevada, laws must be based on science, not stigma and fear

Uruguay: Feminist organisation opposes amendment to penal code that would imprison citizens who do not comply with health measures