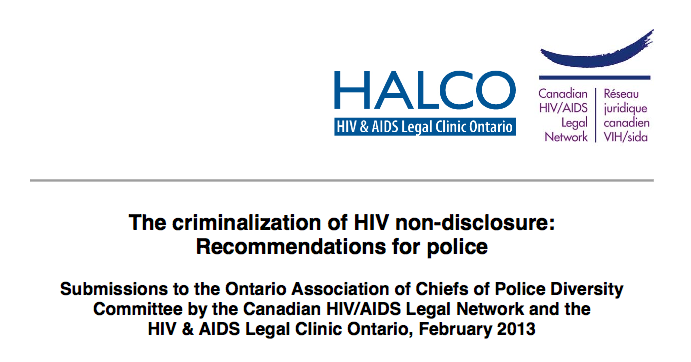 The Canadian HIV/AIDS Legal Network and HIV & AIDS Legal Clinic Ontario (HALCO) have submitted a paper to the Ontario Association of Chiefs of Police Diversity Committee, informed by their extensive experience in working on the issue.

The paper includes concrete recommendations for police that could be addressed in a general Best Practice Manual, and recommend the development of specific guidelines in relation to non-disclosure of HIV (and possibly other sexually transmitted infections), in consultation with people living with HIV and the Ontario Working Group on Criminal Law and HIV Exposure (CLHE), as well as other relevant stakeholders.

The Ontario Association of Chiefs of Police should engage in a dialogue with representatives of the community, including the Ontario Working Group on Criminal Law and HIV Exposure(CLHE) in order to develop:

Indeed, both training and guidance on HIV-related issues are urgently required in the aftermath of last November’s Supreme Court ruling which has created a great deal of confusion regarding the exact circumstances when alleged HIV non-disclosure may be a crime.

As the submission notes

Guidelines can help ensure that complaints are handled in a fair, non-discriminatory and consistent manner across the province; criminal investigations are informed by current medical and scientific knowledge about HIV and the social contexts of living with HIV; criminal investigations do not reinforce societal prejudices, preconceptions, and irrational fears regarding HIV, or undermine public health efforts to prevent the spread of HIV; unnecessary investigations are not pursued; and the rights of people living with HIV and complainants are fully respected and preserved.

Guidance around confidentiality issues are needed now more than ever.  Last month, Toronto police issued a press release stating they were looking for a gay man “who failed to notify his partner that he is HIV positive.” The following day, they withdrew the alert “after police probed the case, [because] investigators found that no criminal offence was committed.”  Unusually in this case, however, no name or photo was released.

Specific recommendations from HALCO and the Legal Network on this issue state:

Police should consider the negative impacts of publicly disclosing a person’s HIV-positive status given the high level of stigma experienced by people living with HIV. Police must ensure that the privacy of HIV status and other medical information is respected to the greatest extent possible (applies to accused and complainants). Media releases including the name, picture and/or health information of an accused are extremely prejudicial for people living with HIV and should only be published in exceptional circumstances and under strict conditions. Police should be mindful that even where HIV is not specified on a police and/or media release, members of the general public and/or people associated with the accused may easily understand that the accused is HIV-positive because of general awareness of HIV non-disclosure prosecutions in Canada. Detailed guidance should be developed to assist police in making decisions to publish a police and/or a media release, and to assist police with the content of such releases. Guidance should be developed to assist police in communicating to the media and the public about cases involving HIV non-disclosure.

The campaign for police training and guidelines in Ontario runs in parallel with a similar campaign for prosecutorial guidelines. A recent article in Lawyers Weekly highlights how advocates have been pushing for such guidelines for several years, and are hopeful that some movement may now take place

That hope springs from two sources. First, Canadian provinces would not be the first to put such guidelines in place. England, Wales and Scotland already have related prosecutorial requirements. Second, Ontario’s justice ministry had previously indicated a willingness to do this before the recent SCC decisions were handed down.

The full submission can be read below or downloaded here.

The criminalization of HIV non-disclosure: Recommendations for police