I’ve just done a rather quick and dirty calculation of prosecutions for HIV non-disclosure, exposure or transmission per capita, based on GNP+’s Global Criminalisation Scan data, and produced this rather interesting league table. 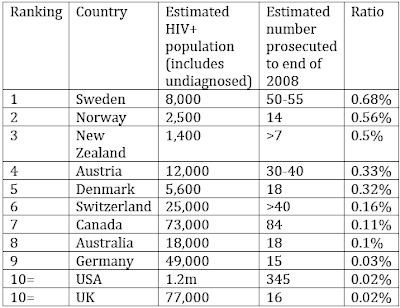 Despite Canada, the US and Australia being disproportionately represented on my blog, due to the sheer number of prosecutions taking place, Sweden, Norway and New Zealand have actually prosecuted the highest proportion of people with HIV in their respective countries.

Having just returned from an excellent conference organised by HIV Sweden in Stockholm (on which I reported today in this aidsmap.com news story, highlights of which are below), it really comes as no surprise that Sweden and Norway head the league of shame.

And last Tuesday, Mr Justice Cameron addressed a meeting in Stockholm organised by HIV Sweden to discuss HIV and the criminal law in Sweden and other Nordic countries.

The meeting heard that Sweden’s laws were often applied selectively and discriminatory, including the recent case of an African migrant woman who had gone to the police after being raped by two men.

However, rather than charge her assailants, the police charged the woman with HIV exposure. The case is still ongoing.

Peter Gröön, of Stockholm County Council, shared data showing that African migrants – ten of the 16 people prosecuted in the past five years – also received longer prison sentences than their Swedish counterparts. Mr Justice Cameron told the meeting that this kind of HIV exceptionalism, which is fuelled by stigma, must not be tolerated. “We want [HIV to be treated] neither better, nor worse than any other disease,” he said.

The meeting also heard that a coalition of grass roots and civil society organisations in Norway might lead to an abolition of Norway’s current HIV exposure and transmission law, Section 155, which has led to ten prosecutions the past five years.

The law, which does not allow HIV-negative people to consent to unprotected sex, and makes little distinction between HIV exposure and transmission, places the burden on HIV-positive individuals to both disclose HIV status and insist on condom use in order to be able to avoid potential prosecution.

Through a campaign that has included providing every MP in Norway with information about the inequities of the law, and a major newspaper article from Mr Justice Cameron, published in May, representatives of HIV Manifesto and HIV Norway were hopeful that the law will be repealed during the country’s revision of the its Penal Code.

The meeting also heard that a similar opportunity might also be possible in Sweden later in the year, during the pubic debate that will follow a proposal to lengthen prison sentences for assault (the law under which criminal HIV exposure and transmission is prosecuted in Sweden).