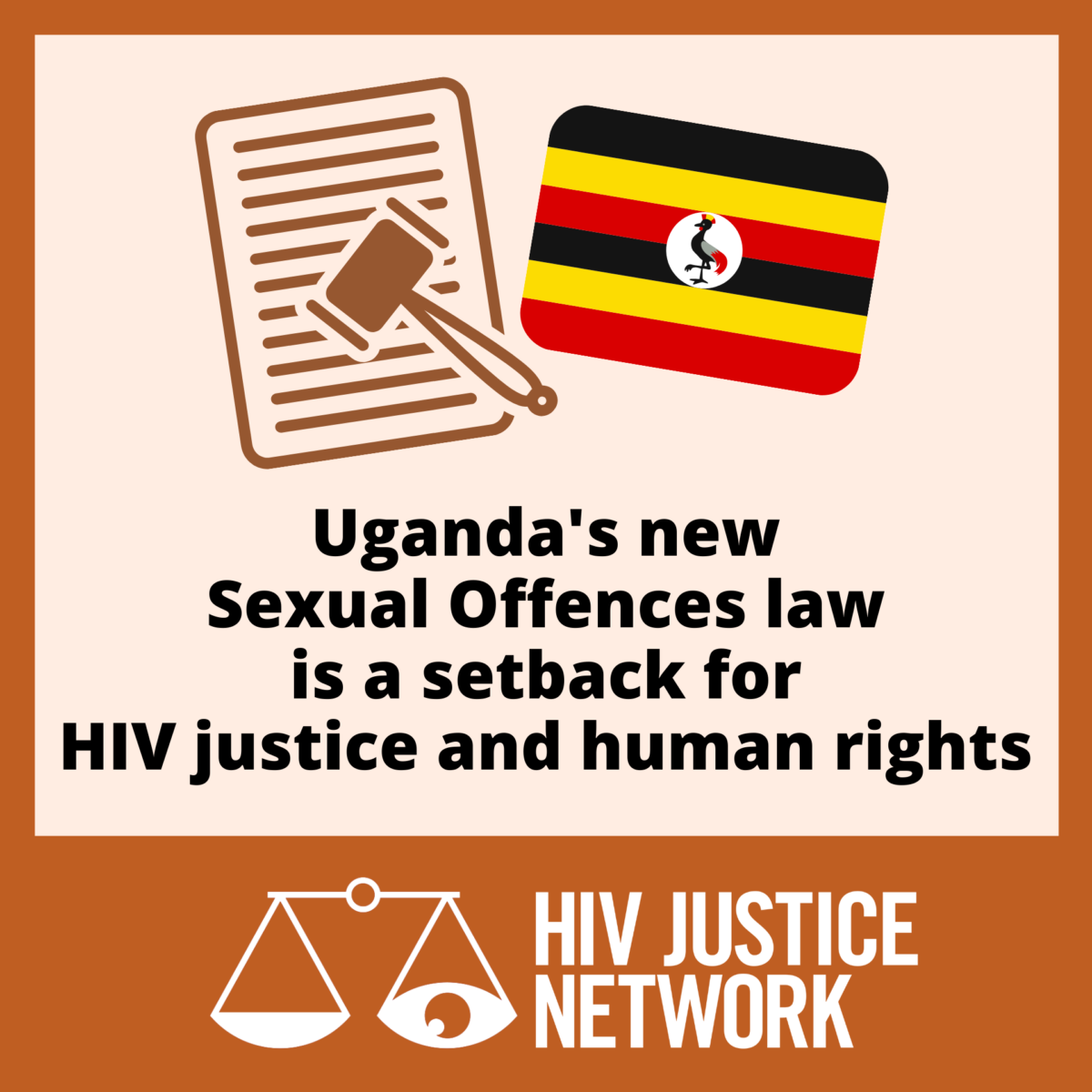 The HIV Justice Network (HJN) joins other civil society and human rights organisations in condemning the passage of the Sexual Offences Bill in Uganda earlier this week.

The move by Ugandan Parliamentarians to pass the Sexual Offences Bill is a major concern for those working to end HIV and intersectional criminalisation. Considering that Uganda already passed the HIV Prevention and Control Act in 2014, which criminalises HIV transmission, attempted transmission, and behaviour that might result in transmission by those who know their HIV status, this new law goes further.

One of the definitions of rape in the Bill is ‘misrepresentation’, which runs the very real risk of being interpreted by the criminal legal system as HIV status non-disclosure, and if the accused is found to be living with HIV, this results in the death penalty.

The Human Rights Awareness and Promotion Forum (HRAPF) stated: “Singling out HIV and AIDS as a factor for aggravated penalty for rape, discriminates against people living with HIV. The provision places the burden on people living with HIV which do not fall to those living with other infectious illnesses. Using HIV and AIDS as a factor for aggravated offence treats people with HIV as vectors of disease, rather than as people with an interest in their own health and rights. This provision undermines the efforts to eliminate the stigma that surrounds people living with HIV and AIDS. … [This] law falls most heavily on those who ‘took the trouble’ to get tested and may even by engaging in safe sex options. This may discourage those who do not know their status from having an HIV test.”

The Bill, which attempted to fill a gap in current legislation around issues of sexual assault and rape, goes much, much further by also criminalising same-sex acts and sex work.

“It is clear from the Bill that some of the clauses directly reinforce sections of the Penal Code Act Cap 120 of Uganda that criminalise homosexuality and sex work. This is, therefore, a direct threat of chapter 4 of the 1995 Constitution of the Republic of Uganda that promotes human rights of all Ugandans,” said Richard Lusimbo, the National Coordinator of the Uganda Key Populations Consortium.

His sentiments are echoed by Women with a Mission and Triumph Uganda, who have analysed the Bill’s implication to the LGBTQ+ and sex workers community, and who have urged for a re-review and amendments to the problematic clauses, which were passed suspiciously.

“We urge the President of Uganda to task parliament to re-review provisions of the Bill that will fuel human rights violations, impede, and undermine the registered gains in the fight against HIV/AIDS. We urge all stakeholders in the health sector to voice the negative implications of the law against HIV/AIDS, STIs, and justice on the key priority and marginalized communities and civil society organizations in Uganda.

With the passage of the legislation, the President is expected to assent the Bill into law within fourteen working days. The legislation was first tabled by Hon Monica Amoding, MP for Kumi Municipality on April 14, 2016, and was described as consolidating and amending the law to sexual offences from various enactments. At the third reading of the bill, the MPs included the various contentious clauses and amendments that are now being challenged.