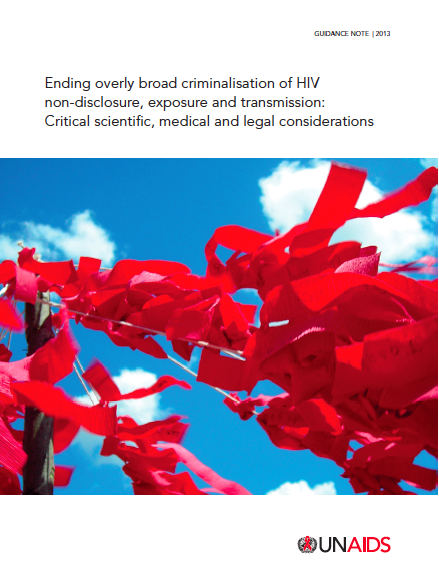 Today, the Joint United Nations Programme on HIV/AIDS (UNAIDS) publishes its long-awaited updated guidance to limit the overly broad use of criminal laws to regulate and punish people living with HIV who are accused of HIV non-disclosure, exposure and/or transmission. The guidance aims to ensure that any application of criminal law in the context of HIV achieves justice and does not jeopardise public health objectives.

As I highlighted in my opening remarks [at the High Level Policy Consultation on criminalization of HIV Non-disclosure, Exposure and Transmission co-hosted by UNAIDS and the Government of Norway on 14-15 February 2012] in Oslo, the overly broad criminalisation of HIV non-disclosure, exposure and transmission at best indicates a lack of understanding of the science of HIV, at worst comprises an expression of discrimination against people living with HIV.  Such overly-broad laws not only lead to miscarriages of justice, but also threaten our efforts to address HIV in an effective and rights-based manner.

The new guidance reiterates the positions previously stated in the 2008 Policy Brief issued by UNAIDS and the United Nations Development Programme  (UNDP) and the recommendations of the Global Commission on HIV and the Law, to limit the application of criminal law to cases of intentional transmission (i.e. where a person knows his or her HIV-positive status, acts with the intention to transmit HIV, and does in fact transmit it) and that general – and not HIV-specific – laws should be used for these extremely rare occasions.

It also stresses that because overly broad HIV criminalisation raises serious human rights and public health concerns, rather than relying on laws, investigations, prosecutions and imprisonment, resources should focus on “expanding the use of proven and successful evidence-informed and rights-based public health approaches to HIV prevention, treatment and care, and limit any application of criminal law to truly blameworthy cases where it is needed to achieve justice. States should strengthen HIV programmes that enable people to know how to protect themselves from HIV and to avoid transmitting it, and they should help people access the services and commodities they need for HIV prevention, treatment, care and support.”

Mindful that this ideal cannot be achieved in the short-term, UNAIDS then provides detailed and specific “considerations and recommendations” to address how the criminal law is currently applied to HIV non-disclosure, exposure or transmission. “It offers these to help governments, policy-makers, law enforcement officials, and civil society—including people living with HIV—to achieve the goal of limiting and hopefully ending the overly broad application of criminal law to HIV. These considerations and recommendations are also provided to help ensure, to the best degree possible, that any application of criminal law in the context of HIV achieves justice and does not undermine public health.”

There are three main princples behind the guidance. The use of criminal law in relation to HIV should

The guidance then provides detailed considerations and recommendations, with regard to

In the absence of the actual transmission of HIV, the harm of HIV non-disclosure or exposure is not significant enough to warrant criminal prosecution. Non-disclosure of HIV- positive status and HIV exposure should therefore not be criminalised.

Any application of criminal law to HIV non-disclosure, exposure or transmission should require proof, to the applicable criminal law standard, of intent to transmit HIV. Intent to transmit HIV cannot be presumed or solely derived from knowledge of positive HIV status and/ or non-disclosure of that status and/or from engaging in unprotected sex, having a baby without taking steps to prevent mother-to-child transmission of HIV, or by sharing drug injection equipment.

Any penalties for HIV non-disclosure, exposure or transmission should be proportionate to the state of mind, the nature of the conduct, and the actual harm caused in the particular case, with mitigating and aggravating factors duly taken into account.

Countries should develop and implement prosecutorial and police guidelines to clarify, limit and harmonise any application of criminal law to HIV. The development of such guidelines should ensure the effective participation of HIV experts, people living with HIV, and other key stakeholders. The content of these guidelines should reflect the scientific, medical and legal considerations highlighted in the present document.