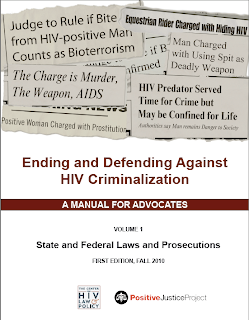 The Center for HIV Law and Policy has released the first comprehensive analysis of HIV-specific criminal laws and prosecutions in the United States. The publication, Ending and Defending Against HIV Criminalization: State and Federal Laws and Prosecutions, covers policies and cases in all fifty states, the military, federal prisons and U.S. territories.

Ending and Defending Against HIV Criminalization: State and Federal Laws and Prosecutions is intended as a resource for lawyers and community advocates on the laws, cases, and trends that define HIV criminalization in the United States. Thirty-four states and two U.S. territories have HIV-specific criminal statutes and thirty-six states have reported proceedings in which HIV-positive people have been arrested and/or prosecuted for consensual sex, biting, and spitting. At least eighty such prosecutions have occurred in the last two years alone.

People are being imprisoned for decades, and in many cases have to register as sex offenders, as a consequence of exaggerated fears about HIV. Most of these cases involve consensual sex or conduct such as spitting and biting that has only a remote possibility of HIV exposure. For example, a number of states have laws that make it a felony for someone who has had a positive HIV test to spit on or touch another person with blood or saliva. Some examples of recent prosecutions discussed in CHLP’s manual include:

• A man with HIV in Texas is serving thirty-five years for spitting at a police officer;

• A man with HIV in Iowa, who had an undetectable viral load, received a twenty-five year sentence after a one-time sexual encounter during which he used a condom; his sentence was suspended, but he had to register as a sex-offender and is not allowed unsupervised contact with his nieces, nephews and other young children;

• A woman with HIV in Georgia received an eight-year sentence for failing to disclose her HIV status, despite the trial testimony of two witnesses that her sexual partner was aware of her HIV positive status;

• A man with HIV in Michigan was charged under the state’s anti-terrorism statute with possession of a “biological weapon” after he allegedly bit his neighbor.

The catalog of state and federal laws and cases is the first volume of a multi-part manual that CHLP’s Positive Justice Project is developing for legal and community advocates. The goal of the Positive Justice Project is to bring an end to laws and policies that subject people with HIV to arrest and increased punishment on the basis of gross ignorance about the nature and transmission of HIV, without consideration of the actual risks of HIV exposure.

The manual’s completion was supported by grants for CHLP’s anti-criminalization work and Positive Justice Project from the MAC AIDS Fund and Broadway Cares/Equity Fights AIDS.