Kansas criminalises perceived HIV ‘exposure’ by a number of means through a general disease ‘exposure’ law. We are aware of only two cases of the law being enforced against people living with HIV.

The law is limited to ‘life-threatening communicable diseases’, and although these are not defined, case law shows that this includes HIV. The provision makes it an offence for anyone living with such a disease to engage in penile penetrative sexual intercourse, share needles or syringes with another, or sell or donate blood or other fluids and organs (see our report, Bad Blood, for a global analysis of the criminalisation of blood donations). In all cases there must be an ‘intent to expose’ the other person, however transmission does not need to occur. This offence is a level 7 felony, punishable with a maximum of 34 months’ imprisonment.

Despite the law requiring an ‘intent to expose’, a long-running legal case resulted in the courts interpreting this requirement more broadly. In the case, a man living with HIV was originally convicted in 2007 for alleged sexual HIV ‘exposure’ to two women. The man did not disclose his status or wear a condom, but had an undetectable viral load, meaning that transmission was not possible. This conviction was overturned by the Kansas Supreme Court in 2009 due to a failure by the state to demonstrate evidence that the specific intent to expose was present. However, subsequent litigation resulted in the state Court of Appeals finding that the defendant’s alleged lack of disclosure and condom use equated to this intent. This suggests that an intent to ‘expose’ may be found despite the facts showing otherwise.

In the only other case we are aware of, a man living with HIV was arrested in 2019 for alleged ‘exposure’ after having sex with two people without disclosing his status. It is not clear whether he was convicted.

Exposing another to a life threatening communicable disease

(a) It is unlawful for an individual, who knows oneself to be infected with a life threatening communicable disease, to:

(1) Engage in sexual intercourse or sodomy with another individual with the intent to expose that individual to that life threatening communicable disease;

(2) sell or donate one’s own blood, blood products, semen, tissue, organs or other body fluids with the intent to expose the recipient to a life threatening communicable disease; or

(3) share with another individual a hypodermic needle, syringe, or both, for the introduction of drugs or any other substance into, or for the withdrawal of blood or body fluids from, the other individual’s body with the intent to expose another person to a life threatening communicable disease.

(b) Violation of this section is a severity level 7, person felony.

(c) As used in this section:

(1) “Sexual intercourse” shall not include penetration by any object other than the male sex organ; and 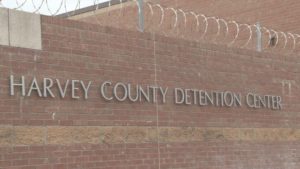 US: Kansas man in jail pending trial for alleged HIV exposure and non-disclosure

US: Kansas man already convicted of HIV exposure in one county convicted again

END_OF_DOCUMENT_TOKEN_TO_BE_REPLACED

US: How well-meaning ideals of constitutional 'equality' are leading to a law that may be used to harass and control people with HIV in Kansas

Kan. health dept. proposal could allow for quarantine of individuals with HIV