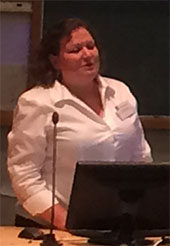 The 8th IAS Conference on HIV Pathogenesis, Treatment and Prevention (IAS 2015) is on in Vancouver, Canada, this week. AFAO Policy Analyst Michael Frommer reports back on the pre-conference community forum.

Key human rights challenges, such as criminalisation of HIV transmission, were centre stage at the IAS community forum on Saturday 18 July.

Alison Symington, co-director of Research and Policy at the Canadian HIV/AIDS Legal Network (Legal Network), described the challenge of advocacy and policy work in Canada in the face of ongoing criminalisation.

Aside from the significant justice issues when charges are laid for HIV non-disclosure, exposure or transmission, she also identified the serious of issue of people threatening their partners with an allegation, when there is relationship conflict, and how this in particular affects women who may be in abusive relationships. 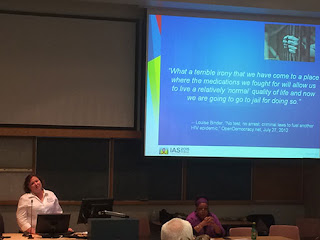 In Canada, as in Australia, most of the people charged to date have been male heterosexuals, with a strong racialised element – mainly Black men. Since the mid-1990s, there has been an increase in the proportion of gay men charged.

Despite the fact that men make up the majority of those charged, Alison has investigated the pernicious effects of criminalisation on women. She explained how the ‘informal’ criminalisation of HIV positive mothers works, with their sense that their parenting is being under surveillance.

She outlined a huge range of advocacy and policy activities being undertaken by the Legal Network in response.

Tactics include contacting the defence lawyers of individuals who have been charged with criminalisation related offences. The Legal Network also intervenes in the formal court proceedings and provides relevant scientific evidence.

This has involved the Legal Network’s participation in the ‘Stop the Witch Hunt’ campaign targeting prosecutors, undertaken in collaboration with the AIDS Action Now. Legal Network staff also sit in court during trials, to make clear to judges/prosecutors that the community is monitoring developments.

This education work is targeted at raising understanding among judges and among the community.

A key piece of work was the Canadian Scientist Statement on HIV transmission risk. The Legal Network organised for 70 leading scientists from across Canada to sign this document which explained clearly the actual levels of risk of HIV transmission.

HIV non-disclosure/exposure/transmission charges in Canada are made under the Canadian criminal law as an aggravated charge using the sexual assault provisions. The Legal Network aims to work with domestic violence/feminist organisations to ensure that HIV-related jurisprudence does not circumvent the appropriate application of sexual assault laws.

This has been an ongoing area of work across Ontario, Quebec and British Columbia. Ontario most recently advocated for the adoption of guidelines, but without adequate community input the Government drafted guidelines were dropped. There is still a desire to pursue appropriately formulated guidelines in future.

The comprehensive advocacy and policy response taken by the Canadian Legal Network is extremely impressive.

With one of, if not the highest rates per capita of criminalisation in the world, it is obviously very necessary in the Canadian context.

While some circumstances differ, there are a great many ideas that may be drawn upon for responding to HIV criminalisation in the Australian context.