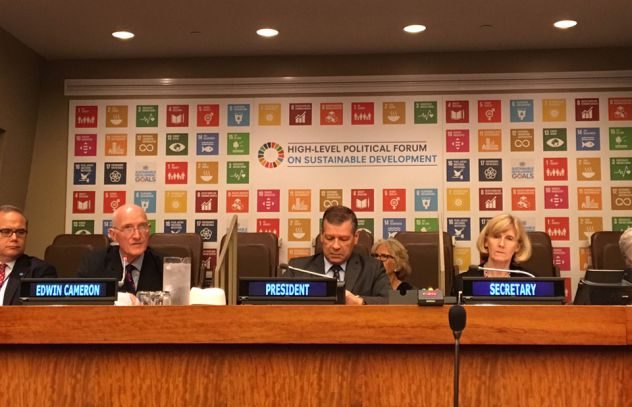 Laws discriminate in many ways, but the criminalization of people is one of the most devastating forms of discrimination. Despite calls for reform and the commitments under the 2030 Agenda for Sustainable Development to remove discriminatory laws and reduce inequalities:

A high-level political forum is meeting in New York, United States of America, from 9 to 18 July to review the progress made against the commitments of Member States towards achieving the Sustainable Development Goals, including those on inequality and on peace, justice and strong institutions.

“As a judge, I have seen the effect that criminal law can have on communities. It takes people outside systems of protection, declares their actions or identity illegitimate, increases stigma and excludes them from any protections our judicial, social and economic systems may provide,” said Edwin Cameron, Justice of the Constitutional Court of South Africa.

Criminalization affects access to health services, housing, education, social protection and employment. The criminalization of same-sex sexual relationships, sex work or drug use prevents people from accessing health-care services, including HIV prevention, testing and treatment. Data show that gay men and other men who have sex with men are 28 times more at risk of HIV than the general population, people who inject drugs are 22 times more at risk and sex workers and transgender women are 13 times at risk.

“To fully implement the Sustainable Development Goal agenda and make sure that no one is left behind, we need to ensure the laws are protecting people from discrimination and not pushing people into hiding from society,” said Lloyd Russell Moyle, United Kingdom Member of Parliament.

Groups that represent criminalized people are often barred from registering as nongovernmental organizations, and, for example, sex workers often can’t unionize. Propaganda laws may mean that information on, for example, HIV prevention can’t be disseminated.

“Ending AIDS and meeting the health-related Sustainable Development Goals targets will not be possible without addressing discrimination, violence and exclusion. We have an opportunity to harness the lessons from the AIDS movement and place rights and the meaningful participation of the most marginalized at the centre of the response,” said Luisa Cabal, Director for Human Rights and Gender, UNAIDS.

Criminalized groups often experience higher rates of violence than the general population. Victims of violence who are also criminalized often can’t report crimes against them to the police, and lawyers risk violence and other repercussions if they take up their cases.

“Discrimination against and criminalization of people living with HIV still continues to this day. And we are facing in Indonesia persistent stigma against and criminalizing of key populations. We will never end AIDS if we are not making their needs and rights a top priority for access to health care, protection against violence and realization of the right to health,” said Baby Rivona, from the Indonesian Positive Women Network.