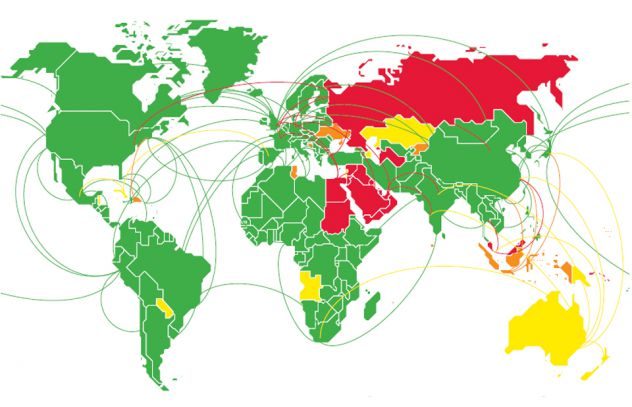 New data show that in 2019 around 48* countries and territories still have restrictions that include mandatory HIV testing and disclosure as part of requirements for entry, residence, work and/or study permits

GENEVA, 27 June 2019—UNAIDS and the United Nations Development Programme (UNDP) are urging countries to keep the promises made in the 2016 United Nations Political Declaration on Ending AIDS to remove all forms of HIV-related travel restrictions. Travel restrictions based on real or perceived HIV status are discriminatory, prevent people from accessing HIV services and propagate stigma and discrimination. Since 2015, four countries have taken steps to lift their HIV-related travel restrictions—Belarus, Lithuania, the Republic of Korea and Uzbekistan.

“Travel restrictions on the basis of HIV status violate human rights and are not effective in achieving the public health goal of preventing HIV transmission,” said Gunilla Carlsson, UNAIDS Executive Director, a.i. “UNAIDS calls on all countries that still have HIV-related travel restrictions to remove them.”

“HIV-related travel restrictions fuel exclusion and intolerance by fostering the dangerous and false idea that people on the move spread disease,” said Mandeep Dhaliwal, Director of UNDP’s HIV, Health and Development Group. “The 2018 Supplement of the Global Commission on HIV and the Law was unequivocal in its findings that these policies are counterproductive to effective AIDS responses.”

Out of the 48 countries and territories that maintain restrictions, at least 30 still impose bans on entry or stay and residence based on HIV status and 19 deport non-nationals on the grounds of their HIV status. Other countries and territories may require an HIV test or diagnosis as a requirement for a study, work or entry visa. The majority of countries that retain travel restrictions are in the Middle East and North Africa, but many countries in Asia and the Pacific and eastern Europe and central Asia also impose restrictions.

“HIV-related travel restrictions violate human rights and stimulate stigma and discrimination. They do not decrease the transmission of HIV and are based on moralistic notions of people living with HIV and key populations. It is truly incomprehensible that HIV-related entry and residency restrictions still exist,” said Rico Gustav, Executive Director of the Global Network of People Living with HIV.

The Human Rights Council, meeting in Geneva, Switzerland, this week for its 41st session, has consistently drawn the attention of the international community to, and raised awareness on, the importance of promoting human rights in the response to HIV, most recently in its 5 July 2018 resolution on human rights in the context of HIV.

“Policies requiring compulsory tests for HIV to impose travel restrictions are not based on scientific evidence, are harmful to the enjoyment of human rights and perpetuate discrimination and stigma,” said Dainius Pūras, Special Rapporteur on the right of everyone to the enjoyment of the highest attainable standard of health. “They are a direct barrier to accessing health care and therefore ineffective in terms of public health. I call on states to abolish discriminatory policies that require mandatory testing and impose travel restrictions based on HIV status.”

The new data compiled by UNAIDS include for the first time an analysis of the kinds of travel restrictions imposed by countries and territories and include cases in which people are forced to take a test to renew a residency permit. The data were validated with Member States through their permanent missions to the United Nations.

UNAIDS and UNDP, as the convenor of the Joint Programme’s work on human rights, stigma and discrimination, are continuing to work with partners, governments and civil society organizations to change all laws that restrict travel based on HIV status as part of the Global Partnership for Action to Eliminate all Forms of HIV-Related Stigma and Discrimination. This is a partnership of United Nations Member States, United Nations entities, civil society and the private and academic sectors for catalysing efforts in countries to implement and scale up programmes and improve shared responsibility and accountability for ending HIV-related stigma and discrimination.

The Joint United Nations Programme on HIV/AIDS (UNAIDS) leads and inspires the world to achieve its shared vision of zero new HIV infections, zero discrimination and zero AIDS-related deaths. UNAIDS unites the efforts of 11 UN organizations—UNHCR, UNICEF, WFP, UNDP, UNFPA, UNODC, UN Women, ILO, UNESCO, WHO and the World Bank—and works closely with global and national partners towards ending the AIDS epidemic by 2030 as part of the Sustainable Development Goals. Learn more at unaids.org and connect with us on Facebook, Twitter, Instagram and YouTube.