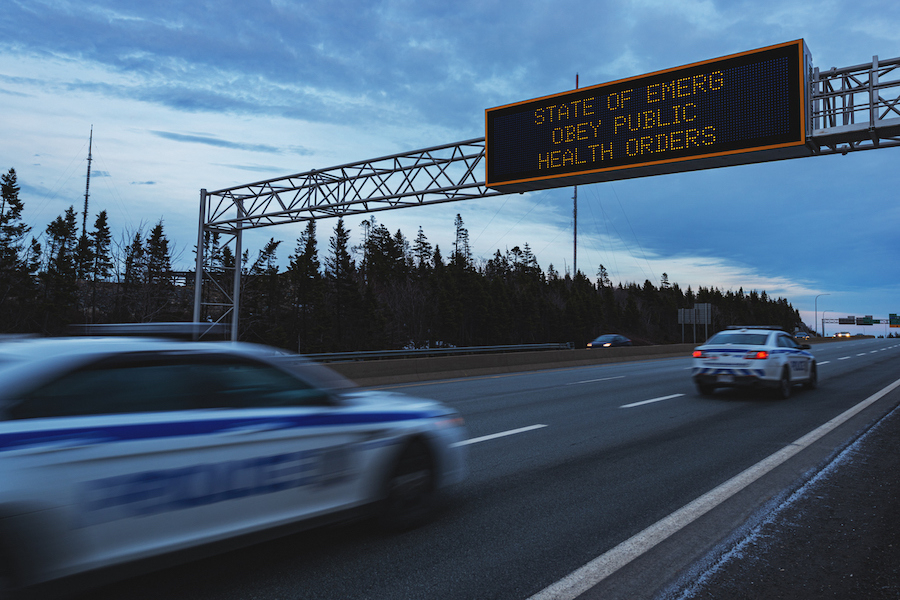 As states and municipalities struggle with how to enforce COVID-19 distancing and shutdown measures, many HIV criminal law reform advocates are looking warily at the news and waiting for history to repeat, or at least rhyme. Advocates expect new criminal laws on COVID-19 transmission, just like statutes enacted around HIV transmission, to come sooner or later.

These advocates say getting ahead of such laws is crucial—and that now is the time to remind lawmakers and law enforcement that statutes around infectious diseases must be grounded in public health and science, not inflamed by hysteria; in other words, avoid what happened with HIV laws decades ago.

It’s speculation at this point: In the three months since COVID-19 emerged in the U.S., no new criminal laws around transmission of the virus have been enacted. But prosecutions of transmission of COVID-19, deliberate or not, are probably going to happen, and there will be open questions: Did the victim contract the virus from one person who can be identified?

Belly Mujinga, a 47 year-old Black rail worker in the UK who was spat on by a man while on duty, died of COVID-19, but prosecutors will have a difficult time proving whether he contributed to Mujinga’s death, even if they find him and even if he does have the virus. Here in the U.S., most cases involving spitting usually occur when someone with HIV (and sometimes hepatitis C) is accused of spitting at police officers when arrests are being made—even though saliva is not a route of HIV transmission.

But if more incidents like this surface around COVID-19, lawmakers might be tempted to pass laws subjecting anyone coughing or spitting on another person—or just coughing in public—to misdemeanors, or even felonies. That’s something HIV advocates hope to prevent. They’ve been trying to overturn criminal laws like that for decades.

TheBody asked several HIV criminal law modernization advocates about what the novel coronavirus pandemic could mean for HIV laws, and vice versa. Most were cautiously optimistic that their years of educating lawmakers and law enforcement could make it easier to prevent new, draconian laws around criminal transmission of the COVID-19 virus. Some say that, if done right, the COVID crisis could present an opportunity to renew efforts in educating law enforcement, lawmakers, and the public that HIV criminal statutes are still on the books, still being enforced, and have done nothing to slow the transmission of the virus.

A provision of the federal Ryan White Comprehensive AIDS Resources Emergency (CARE) Act in 1990 required states to certify their ability to prosecute any HIV-positive person who knowingly exposed another person, whether they actually transmitted it or not. Some states relied on existing statutes; others, like Iowa, wrote new ones around transmitting HIV. In almost every case, these new HIV laws went far beyond laws on the books.

Iowa revamped some of its HIV laws in 2014, allowing a tiered-sentencing system of felonies and misdemeanors, rather than a flat 25-year prison term. Those convicted under the law no longer have to register as sex offenders. But Iowa activists say there is much more to be done.

Tami Haught, organizing and training coordinator for the Sero Project, fought to modernize Iowa’s laws for years, and she’s wary about what could happen around coronavirus.

“I’m a pessimist,” Haught tells TheBody. “The fear of the unknown makes society reach for criminal laws. We don’t have a strong public health knowledge. People don’t understand disease, generally. If deaths continue to rise (from COVID-19), it worries me that legislators will create new laws to prosecute, spurred on by an uneducated public demanding new laws.”

Haught says new COVID-19 laws could be stopped, but that will require a broad and diverse team of advocates. “In Iowa, it took years for all [HIV] advocates to speak with one message, before going to the legislature. We shared our talking points with the League of Women Voters, not a usual subject, and the League made one of their top four goals the repeal of HIV laws in 2014. They had relationships with politicians that we didn’t have.”

Lauren Fanning, with the Washington HIV Justice Alliance, is still celebrating a significant revision of that state’s HIV criminal laws, which reduce penalties for HIV exposure from a felony to a misdemeanor, require specific intent to transmit HIV and for transmission to occur, and remove the requirement for sex offender registration. It was accomplished on a party-line vote and signed into law by Gov. Jay Inslee in March.

“No Republican voted for [the reform],” Fanning says. Advocates didn’t get everything they wanted: Republicans demanded an amendment to keep one felony for limited circumstances—if an HIV-positive person transmits HIV to a minor or vulnerable adult, that is still a first-degree felony.

“A lot of Republicans in the legislature want to keep HIV laws and also criminalize other diseases,” Fanning says. “As long as it is not part of their reality, they will make it criminal. They don’t believe these diseases can affect them. They also wanted to quarantine people during the Ebola crisis.”

That’s why Fanning expects Republicans to introduce new COVID-19 transmission criminal laws, and she and other advocates will fight them. “We don’t need a new law. COVID-19 could apply to noxious or poisonous substances under existing law,” she says.

“We will be checking laws next year when the legislature is in session to see if something is slipped in. I told the health department to be prepared to step in front of any laws.”

Catherine Hanssens, founder and executive director of The Center for HIV Law and Policy (CHLP), says COVID presents an opportunity to build on the groundwork laid by HIV criminal law reform advocates, by “pointing out the futility and cruelty of criminal penalties.”

“[COVID] gives state advocates the opportunity to talk to lawmakers about responding to a virus with a police approach, and let them know that if you arrest someone without a mask to prevent transmission and then put them in jail, in close quarters, that is not productive.”

Hanssens and other advocates are calling for limited prisoner release. Correctional facilities, along with nursing homes, meat-packing plants, and anywhere people are confined to tight spaces, have very high rates of transmission of COVID-19.

As for how the COVID-19 pandemic might impact HIV criminal law reform, Hanssens said it might not hurt the movement, but it might put it on pause. “States are focused on dealing with the immediate pandemic. Getting legislators to focus on something that is not COVID-19 might not work now, and practically, it may not be strategically the best choice to push HIV criminal law reform right now.”

But that doesn’t mean continuing education and coalition-building can’t take place, Hanssens says. “This is a chance for all in anti-criminalization to see the necessity of looking outside our silo and make intersectionality a reality.” Out of concern that people with HIV would not be prioritized for scarce resources in emergency care in New York City, last month CHLP worked with the disability rights movement to draft principles for allocating resources. The principles say that older people and those with disfavored statuses should have equal access to other respiratory therapies, testing, medications, critical care beds, and staff time, which current guidance fails to adequately protect.

A Silver Lining in a Red State

Indiana, one of the nation’s highly conservative states, has several HIV criminal laws. If you know you have HIV and are accused of HIV nondisclosure to sexual or needle-sharing partners, or you attempt to donate or sell blood, semen, or plasma—you could face a felony. The state also has HIV-related sentence enhancements to its criminal battery in the form of bodily fluid laws, including fluids that do not transmit HIV.

IUPUI associate professor and HIV modernization activist Carrie Foote, Ph.D., says Indiana is making progress to modernize many of its draconian HIV criminal laws, but much work remains. Unlike most other states, Indiana also criminalizes transmission of viral hepatitis and tuberculosis, which is transmitted in similar ways to COVID-19. Because of that, Foote thinks lawmakers could try to criminalize COVID-19 as well.

At least one Indiana prosecutor has vowed to prosecute anyone who knowingly attempts to infect others with COVID-19 but didn’t say whether a new law was needed.

Foote hopes for the best-case scenario as the COVID-19 epidemic plays out: lawmakers not adding COVID-19 laws, and a new opportunity for advocates to show the problems of antiquated HIV and other disease-related criminal laws.